Dementia describes an overall decline in memory and other thinking skills severe enough to reduce a person's ability to perform everyday activities. It is characterized by the progressive and persistent deterioration of cognitive function. Patients with dementia have problems with cognition, behaviour, and functional activities of everyday life. In addition, affected patients have memory loss and lack of insight into their problems.[1]

The pathophysiology of dementia is not understood completely. Most types of dementia, except vascular dementia, are caused by the accumulation of native proteins in the brain.

The hippocampus though is often involved and contributes to the well-known symptoms of memory loss. Cells in this region are normally first to be damaged in Alzheimer's Disease[3], resulting in the common symptom of memory loss. Changes in hippocampal volume (a reduction) are seen with common patterns of aging but are exacerbated in Alzheimer's[4] 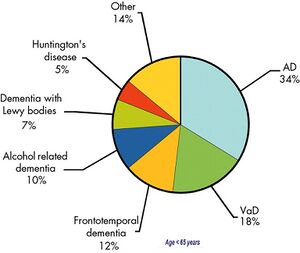 Early signs of dementia are normally subtle, sometimes mimicking other patterns of ageing[6]. It can include[14][15]:

Although some cases of dementia are reversible (e.g. hormonal or vitamin deficiencies), most are progressive, with a slow, gradual onset. Certain symptoms, mostly behavioural and psychological, can result from drug interactions, environmental factors, unreported pain and other illnesses[15].

General practitioners are usually the first port of call for diagnosis of dementia[6]. Making a diagnosis can be challenging. The NICE Guidelines for Dementia recommend the following process for making a diagnosis.

Diagnosis of the dementia subtype is critical for clinical management and anticipating the course of disease[6]. Certain types of dementia are diagnosed by medical history, physical examination, blood tests, and characteristic changes in thinking, behaviour and the effect on performance of activities of daily living. The diagnosis of dementia subtype can be difficult to diagnose as many of the symptoms and brain changes overlap. Secondary care services normally assist in the diagnosis of the specific subtypes of dementia with the use of imaging[6] or examining cerebrospinal fluid[16]. A pilot study developed a study protocol aimed at aiding the early detection of dementia disorders using the Timed Up-and-Go (TUG) test with the verbal task of naming different animals[17]. A research study suggests that poor visual acuity resulted in poorer executive function, which further caused more inadequate balance control, thus demonstrating the importance of assessing executive functions besides vision and balance in older individuals living with Alzheimer's dementia[18].

Dementia can have different causes, and the following conditions need to be treated and/or excluded first:

Medical management should be sought as soon as symptoms start appearing, as some of the causes are treatable, and early diagnosis and management can minimise the disease process to allow the most benefit from available treatments. A study suggests the need for optimal assessment, better communication among health care professionals for treating patients with dementia with multiple impairments[19].

FDA-approved medications to improve cognitive functions include cholinesterase inhibitors and memantine. Cholinesterase inhibitors prevent the breakdown of acetylcholine and can slow or delay the worsening of symptoms. Memantine is an NMDA agonist and decreases the activity of glutamine. Donepezil is approved for all stages of Alzheimer's disease, galantamine, and rivastigmine for mild to moderate stage and memantine for moderate to severe stage.

Behavior symptoms include irritability, anxiety, and depression. Antidepressants like SSRI, antipsychotics, and anxiolytics can help with these symptoms. In addition, non-drug approaches like supportive care, memory training, physical exercise programs, mental and social stimulation must be employed in symptom control.

There are many other drugs that are still under investigation, such as anti-tau protein agents. So far, these have not shown promising results.

Patients and their families should be counselled about the disease and its consequences. They should be provided with all the necessary information in regards to what to expect and how to react to it. Patients and their families should also be encouraged to seek social service consultations and to register with support groups and societies such as the Alzheimer's society. Driving restrictions may have to be imposed[1].

The NICE Guideline for Dementia discusses pharmacological management of dementia according to subtype in depth.

Physiotherapy is not a modality used to treat the underlying cause of dementia, but exercise can be used in the prevention of dementia and minimising the effects of dementia e.g. reduced mobility and pain. In addition, well-rounded knowledge of dementia is important in the management of patients with dementia presenting to physiotherapy for other conditions. A study[24] suggests that a high-intensity functional exercise program has positive outcomes on balance in these patients.

Physiotherapists can play a role in customising exercise programmes. Research has shown positive effects that exercise can prevent or delay the onset of dementia, by slowing down the cognitive decline[25][26]. This can lead to improved quality of life and slowing down of functional decline expected with the disease process[26]. There is also some evidence that exercise therapy can improve the ability of people with dementia in performing activities of daily living[27]. The cross-sectional study published in Feb 2020 suggests a positive association between global cognitive function and self-paced gait speed in very old people[28]. A randomized controlled trial[29] suggests favorable outcomes with exercise and horticultural intervention programs for older adults with depression and memory problems. Another randomised controlled study suggests that action observation (motor-related information available through the visual function) with gait training provides more significant benefits for gait and cognitive performances in the elderly with mild cognitive impairment.[30]

The diagnosis of dementia can be stressful and overwhelming for the patients and their families. Patient education must be an important part of the clinical management of patients with dementia. Counselling must be given about regular clinic visits, medication compliance, a healthy diet, exercise, and sleep hygiene. Support groups can help with the reduction of issues like anxiety, frustration, anger, loneliness, and depression. The patient should be counselled about the diagnosis and the prognosis. Creating an individualized care plan can empower the patient.

See the Physiopedia guides for carers here and here for further information on supporting carers of people with dementia.

The following list is from a review of useful outcome measures for dementia.