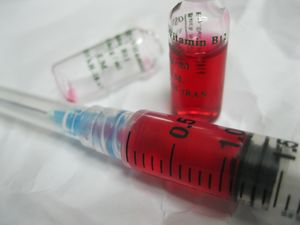 Vitamin B12 is a water-soluble vitamin that is essential for DNA synthesis. Vitamin B12 deficiency is rare, but is most likely found in vegetarians, the elderly, or HIV-infected patients. Common sources of this vitamin can be found in many of the foods we eat such as fish, meat, eggs, and dairy products. It is recommended that adults receive 2.4 micrograms of vitamin B12 daily. In order for vitamin B12 to be absorbed by the body, the body has to have proper amounts of intrinsic factor (IF). Intrinsic Factor helps to absorb vitamin B12 in digestion. When there is a decline in IF, vitamin B12 cannot be absorbed and this causes pernicious anemia. [1]

Clinical prevalence of vitamin B12 deficiency is very hard to determine. This is mostly due to the lack of agreement of what metabolic level actually defines vitamin B12 deficiency. Also, deficiency in this vitamin is assumed to be caused by inadequate intake. This may cause the prevalence to be underestimated, because even those who get B12 in their diet can still have malabsorption issues. It is common to have mild or subclinical vitamin B12 deficiency and less common to have severe or clinical vitamin B12 deficiency. The National Health and Nutrition Examination Survey estimated that between the years of 2001 and 2004, 1 out of 31 adutls that were older than 51 years were deficient in vitamin B12. The most at risk populations are elderly adults and adults of Northern European or African American Decent. This study based their cutoff metabolic levels at 200 pg/mL. Some studies use higher cutoff levels, and therefore may see higher incidence of deficiency. [2]

The below video gives a good summary of the condition

The most common sign of vitamin B12 deficiency is Fatigue. This is caused by the lack of red blood cells to carry oxygen to body tissue.

Lack of RBC may also cause:

There are several different medications that are thought to affect the absorption of vitamin B12.  Although evidence suggest that medications could have an effect on absorbtion, there is not sufficient evidence to prove that they do.  However, patients that use these medications should keep tract of their vitamin B12 levels.

Medications that can interfere with the absorption of vitamin B12 include:

-Chloramphenicol (antibiotic) May interfere with the RBC response to Vit. B12
-Proton Pump Inhibitors (Prilosec) These medications slow down the absorption of Vit. B12.  They do this because they slowly release acid into the stomach.

-H2 Receptor Antagonist (Pepcid, Zantac) These medications slow down the absorbtion of Vit. B12 by releasing hydrochloric acid into the stomach.
-Metformin (Hypoglycemic used for diabetes) May alter the mobility and bacteria in the intestines, or may alter the intrinsic factor needed to absorb Vit. B12. [7]

There are a few diagnostic tests used to diagnose a Vitamin B12 deficiency. The most common tests used include:

In current research there is great deal of variability in which diagnostic tests holds the greatest value in diagnosing Vitamin B12 deficiency. There is also a great deal of disagreement in the cut off values for each lab test performed. [8] [3][10]

There are many things that can cause a vitamin B12 deficiency:
Lack of Intrinsic Factor:
A lack of intrinsic factor (IF) may cause a vitamin B12 deficiency.  This is an essential protein in the small intestine that allows vitamin B12 to be absorbed.  Decreased production of IF can occur during middle age, leaving many elderly adults at risk. Atrophic gastritis can lead to decreased IF production.  This is caused by aging, iron or folate deficiency, autoimmune disorders, endocrine disorders or infections. [11]

Malabsorption in the Small Intestine

Many people can develop vitamin B12 deficiencies by not eating enough foods that contain B12. [6]

Vitamin B12 deficiency can cause hemotalogic, neurologic, gastrointestinal, and cardiovascular symptoms.

Gastrointestinal dysfunction can cause symptoms such as anorexia, flatulence, diarrhea, and constipation.

The most common treatment is vitamin B12 supplements.  Patients can also get vitamin B12 shots, sublingual tablets, and nasal injections.
Recommended dietary amounts (RDAs) for Vitamin B12

An individual with a confirmed or suspected Vitamin B12 deficiency is typically treated by a primary physician with mediation that includes intramuscular injection, oral Vitamin B12 supplements, or through a change in nutritional habits. Treating or diagnosing a patient with a vitamin deficiency typically falls outside of the Physical Therapist Scope of Practice, however physical therapists should be aware of the presenting sign and symptoms of Vitamin B12 deficiency and refer to proper medical personnel with any unusual findings. Physical Therapists should be particularly familiar with the role Vitamin B12 on the nervous system. If a physical therapist suspects that a Vitamin B12 deficiency maybe present they should refer to MD. Early diagnosis of the deficiency is extremely important because the effect of treatments is believed to be linked to the time of diagnosis[8].

Vitamin B12 and the Nervous System

Vitamin B12 acts as a co-enzyme that facilitates myelin synthesis. A defect in the myelin synthesis can lead to both central and peripheral nerve function abnormalities. Some conditions seen with this dysfunction include: myelopathy, neuropathy and optic nerve atrophy. Roughly 25% of individuals suffering from a vitamin B12 deficiency experience peripheral neuropathy.

The spinal cord can become involved in severe deficiency and a syndrome often seen with this is sub-acute combined degeneration (SCD). MRI findings may reveal an inflammation of the spinal cord, most commonly reported at the T2 level. [8]

Clinical presentations of SCD include[8] [4]

For an image of MRI showing image of see SCD:

The most common way to treat vitamin B12 deficiency alternatively is through increasing dietary intake.

Title:
Vitamin B12 deficiency associated with symptoms of frontotemporal dementia [12]
Authors:
C. Blundo, D Marin, and M Ricci
Abstract:
C. Blundo, D Marin, and M Ricci presented a case report of a 72 year old male patient who was believed to have Alzheimer’s disease. He suffered a change in mental activity, along with behavioral and functional decline. Upon further investigation, researchers revealed that changes in patient’s symptoms were due to Vitamin B12 deficiency. The patient was treated with Vitamin B12 supplements. A 7 year follow up study revealed that frontotemporal dementia, due to Vitamin B12 deficiency, can be reversible if proper treatment is implemented.
Patient Characteristics:
Demographics- Patient is a 72 Year old retired male physician, with no past medical or psychiatric history.
Patient History of Symptoms- Patient’s family reported that he was currently showing apathy, irritability, decreased attention span and memory deficits. The family also reports that one year after the onset of initial symptoms, the patient began to display psychotic episodes. These “psychotic episodes” included paranoia, jealousy, and delusional thoughts. The patient was diagnosed with psychosis in an outpatient psychiatric unit. In 2001 the patient’s symptoms began to decline and the patient was placed on Donepezil and was diagnosed with Alzheimer’s Disease. In November 2001 the patient began to show signs of cognitive impairment and peripheral neuropathy and was hospitalized.
The patient has no known co-morbidities and no known previous treatment.