What is Anaemia?[edit | edit source] 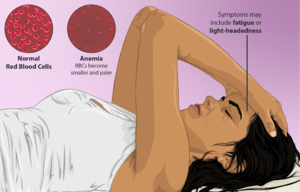 Anaemia(also spelled as anemia) is a condition in which the oxygen-carrying cells (referred to as the red blood cells) are not enough to meet up with the physiological demands of the body[1]. Usually it signals the presence of an underlying disease [2]. Anaemia often results from diseases in the liver or gastrointestinal tract. [3] 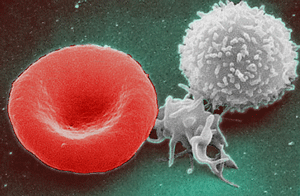 Anaemia affects one-third of the world's population. Oftentimes, it is mild and asymptomatic, requiring no management[2].

It is a global health concern affecting majorly pregnant women and young children. According to WHO, 42% of children less than 5 years of age and 40% of pregnant women globally are anaemic[4]

Physiologically, anaemia results from a disproportionate loss of red blood cell compared to production .[7]This can occur for two reasons[7]: 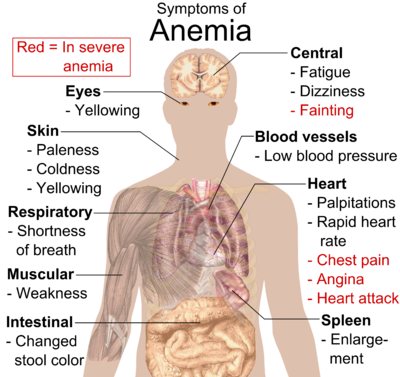 In mild cases there would be no presentation of symptoms. In severe cases, symptoms generally include:

Symptoms depend on factors such as: the etiology of anemia, the acuity of onset, and the presence of other comorbidities e.g. cardiovascular disease[2]. The normal haemoglobin(Hb) ranges are as follows: 13.5 to 18.0 g/dL in men; 12.0 to 15.0 g/dL in women; 11.0 to 16.0 g/dL in children. In pregnancy, range is varied and depends on the trimester, but generally greater than 10.0 g/dL. Anaemia is observed when Hb level is below 7.0g/dl.[2]

There are over 400 types of anaemia[8]. However, this article will focus on just 7 types 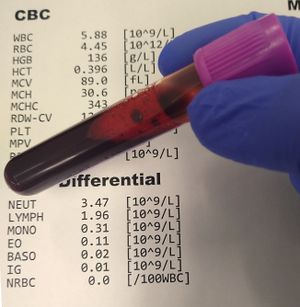 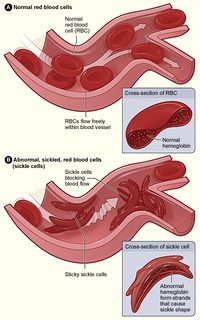 Pernicious anaemia is a decrease in red blood cells that occurs when the intestines cannot properly absorb vitamin B12.