The bony skeleton that supports the human body and facilitates locomotion has an intricate microarchitecture of its own. The cavities created by the trabecular arrangement of the core of the bones are occupied by a mixture of blood cells (across a large spectrum of development) and adipocytes. This tissue is known as Bone Marrow and is responsible for the production of blood cells (hematopoiesis).[1] 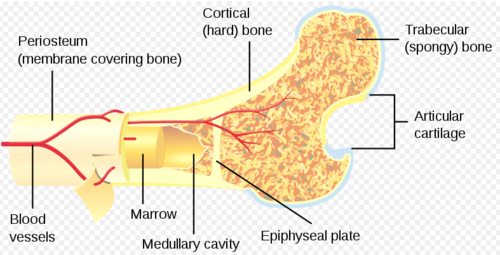 While all blood cells are derived from bone marrow, some white blood cells mature in other organs such as the spleen, lymph nodes, and thymus gland. 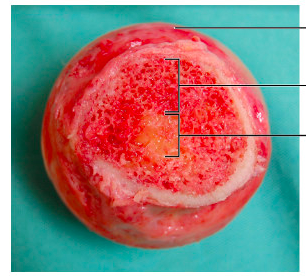 Normal bone marrow is divided into red and yellow marrow, a distinction made on the grounds of how much fat it contains. Image at R: A piece of femur. The white ring is bone. The red spongy part is red bone marrow. The inner yellow circle is yellow marrow.[4] 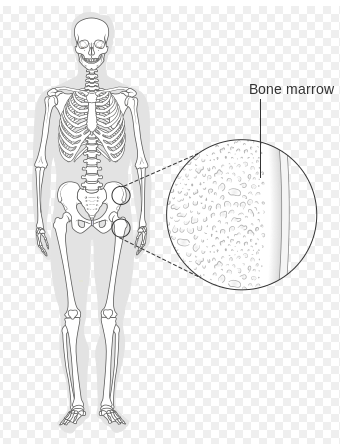 During infancy red marrow occupies the entire ossified skeleton except for epiphyses and apophyses.

Gradually red marrow 'retreats' centrally and by 25 years of age it is essentially confined to the axial skeleton (pelvis, spine, shoulder girdle, skull).

Bone marrow that becomes damaged or diseased results in low blood cell production. These diseases compromise the immune system and deprive organs and tissues of the life-giving oxygen and nutrients they need. 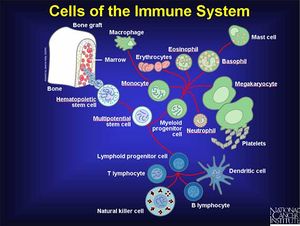