Axons are the elongated portion of the neurone located in the centre of the cell between the soma and axon terminals. Each neuron in your brain has an axon that snakes away from the main part of the cell. Several times thinner than a human hair an axon is where electrical impulses from the neuron travel away to be received by other neurons.

The axon is one of two types of protoplasmic protrusions of the neuronal soma. The other protrusion is the dendrites. Axons are distinguished from dendrites by several characteristics including: 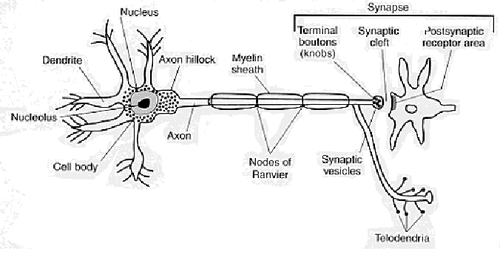 Each neuron has only one axon however bifurcations, that are branches of the main axon, can be present.

Myelin is a fatty substance that wraps around nerve fibers and serves to increase the speed of electrical communication between neurons.

Myelin is made by two different types of support cells. 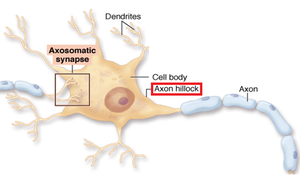 The axon hillock is a cone-like part of the axon. This part of the axon has considerable functional importance since action potential originates here. In other words, this region of the neurolemma processes the incoming signals from other neurons. It represents a trigger zone where the summation of incoming graded excitatory (excitatory postsynaptic potentials, EPSPs) and inhibitory (inhibitory postsynaptic potentials, IPSPs) potentials are realized and, in turn, the action potential is realized or not. If the summation overcomes the threshold limit of the axon hillock, potential starts, and it will be transmitted, in a continuous or saltatory mode, along the axon toward the synapse

The axonal transport is of fundamental importance for the development, maintenance, survival, and functioning of neurons. This happens via molecular motors. The axon is devoid of the apparatus for protein synthesis and therefore is under the control of the cell body.[4] 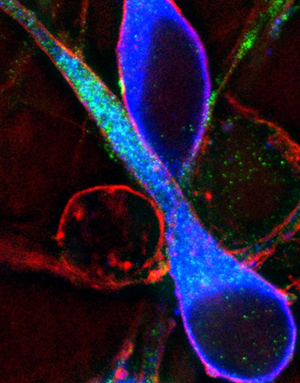 An important axonal structural element is the architecture of the cytoskeleton[1].

Image: Fluorescence image of gonadotropin-releasing hormone expressing neurons ie cells in the brain that control the release of reproductive hormones from the pituitary (blue) with elements of their cellular cytoskeletons shown in red and green.

A large number of functional and/or structural alterations of the axon are at the basis of many neurological disorders that can involve the CNS or PNS. The development of targeted strategies against axonal damage, or focused on axon regeneration, are of fundamental importance for the majority of all neurological diseases.

Image: When the axon of a neuron in the PNS is damaged, retinoic acid stimulates a signal cascade to enhance axonal elongation.