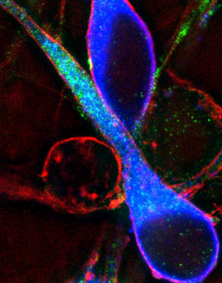 Within all eukaryotic cells there exists a network of filaments, which is a complex mesh of protein filaments and motor proteins that aid in cell movement and stabilize the cell . They help cells maintain their shape and internal structure and mechanical support, enabling cells to carry out basic functions like division and movement. By means of this cytoskeletal network, the cell integrates numerous signals in order to coordinate its behavior, communicate with other cells, and adjust to its environment.

A molecular motor “walking” on a MT

There are three types of filaments make up the cytoskeleton: 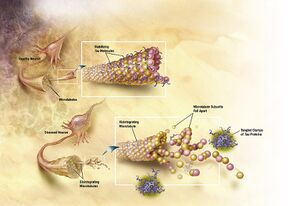 Given the importance of cytoskeleton for neurons, it is easy to see how neurological disorders involve changes either in the expression, dynamics, and and/or the stability of cytoskeletal proteins or their mutations. e.g. tauopathies, all share the common denominator of the altered structure or function of the microtubule-associated protein tau .[5]

The cytoskeleton fibres in striated muscle have diverse roles as mentioned above, including as functioning as a structure for inter- and intracellular signaling. It does this by linking the complex functioning units of thee sarcomeres, enabling them to function effectively, and in turn provide a connection for these structures in turn to the sarcolemma, cell–cell junctions, the mitochondria, and nucleus. When not functioning correctly pathologies occur as in e.g. myopathies.[6]