Heterotopic Ossification (HO) refers to the formation of lamellar bone inside soft tissue structures where bone should not exist. The development of HO is extra-articular and occurs outside the joint capsule. The new bone generally does not involve the periosteum. The HO may also attach to the cortex of adjacent bone, with possible cortical disruption.[1] This process can occur in structures such as the skin, subcutaneous tissue, skeletal muscle, and fibrous tissue adjacent to bone. In more rare forms, HO has been described in the walls of blood vessels and intra-abdominal sites such as the mesentery.[2] The primary risk factor for HO is inciting trauma.[1] Additionally, inflammation has been shown to play a role in the formation of HO due to osteoprogenitor cells being stimulated to proliferate in that environment.[3] Additional factors are described in further detail in the Etiology section. Although HO can be found at any site, it is most prevalent in the major joints such as the hip, elbow, shoulder and knee. 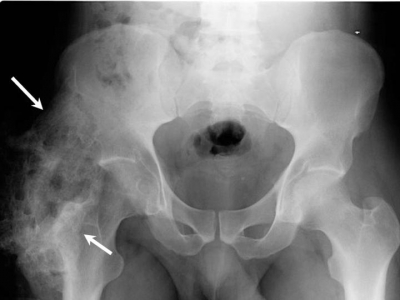 Radiograph showing heterotopic ossification of the hip with thanks from LearningRadiology.com

HO was first described by Patin in 1692 while working with children diagnosed with myositis ossificans progressiva.[4] In 1918, Dejerine & Ceillier detailed the anatomical, clinical, and histological features of ectopic bone formation in soldiers who sustained spinal injuries during World War I.[5]

Following the work of Dejerine & Ceillier, Marshall Urist described the osteoinducive properties of bone morphogenic protein in ectopic areas such as muscle. This was, and still is, considered a "landmark discovery" in orthopedic research.[6] Two of the original research articles by Urist can be found below:

The exact pathophysiology of HO is unknown. The transformation of primitive mesenchymal cells in connective tissue into osteoblastic tissue and osteoid involve diverse and poorly understood triggers.[1] These triggers include genetic, post-traumatic, neurogenic, post-surgical, and reactive lesions of hands and feet. 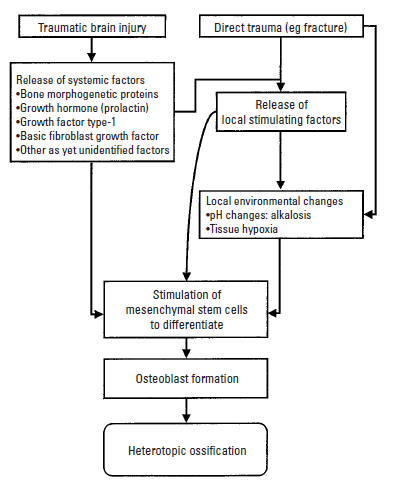 Genetic forms include two types: Fibrodysplasia Ossificans Progressiva (FOP) and Progressive Osseous Heteroplasia(POH). These types are described as massive deposits of heterotopic bone around multiple joints in the absence of an inciting event (i.e. trauma). This is the most severe type of HO, progressively forming throughout the life and severely effecting health, life expectancy, and quality of life.[2]

Post-traumatic HO begins with spindle cell proliferation within the first week of the traumatic event. Within 1-2 weeks, primitive osteoid develops. After the second week, primitive cartilage and woven bone can be seen. Trabecular bone forms 2-5 weeks after the trauma. Amorphous calcium phosphate is gradually replaced by hydroxyapatite crystals as the mineralization progresses. After about 6 months, there is an appearance of true bone in the connective tissue between the muscle planes.[1]

Neurogenic heterotopic ossification occurs after sickle cell anemia, hemophilia, tetanus, poliomyelitis, multiple sclerosis, and toxic epidermal necrolysis. Neurogenic HO develops only in sites distal to the level of the spinal cord injury. The areas affected by HO are almost always on the affected side of brain injury or stroke.[1]

Post-surgical HO most commonly develops after procedures which require open reduction, internal fixation and joint replacement surgeries, with THA being the most common.[2]

Reactive lesions of the hands and feet are usually associated with the periosteum or periarticular fibrous tissue, which differentiates the category from myositis ossificans. These lesions occur in three clinico-radiologic settings: bizzare parosteal osteochondroma 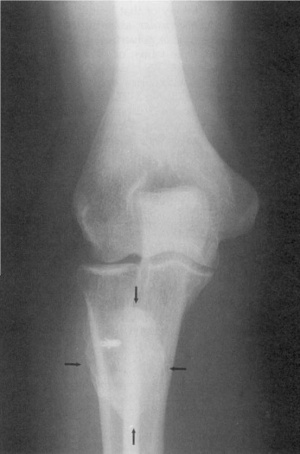 
In a recent study, Foruria et al. looked at the prevalence of heterotopic ossification in all elbow pathologies entering an emergency room over a 5 year period. They found the highest prevalence of HO occurred in terrible triad injuries, transolecranon fracture-dislocations, and an associated distal humeral fracture. The location of the ossification was most commonly found on the posterior aspect of the ulna. Risk factors for HO include dislocation or subluxation at the time of injury, open injury, and severe chest injury. When a pathology was treated surgically, 37% of participants developed an ossification.[7]

Clinical signs and symptoms of HO may appear as soon as 3 weeks or up to 12 weeks after initial musculoskeletal trauma, spinal cord injury, or other precipitating events.[9] The first sign of HO is generally loss of joint mobility and subsequently loss of function. Other findings that may suggest the presence of HO include swelling, erythema, heat, local pain, palpable mass, and contracture formation. In some cases, a fever may be present.[1] 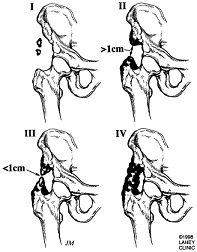 Heterotopic ossification progression of the hip

Differential Diagnoses: The initial inflammatory phase of HO may mimic other pathologies such as cellulitis, thrombophlebitis, osteomyelitis, or a tumorous process.[3][4] Other differential diagnoses include DVT, septic arthritis, hematoma, or fracture. DVT and HO have been positively associated. This is thought to be due to the mass effect and local inflammation of the HO, encouraging thrombus formation. The thrombus formation is caused by venous compression and phlebitis.[1]

Brooker did not describe a class 0 but subsequent studies using the Brooker classification have defined Class 0 as the absence of radiographic HO.

Chronology of Development of Heterotopic Ossification[2] 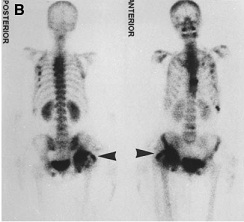 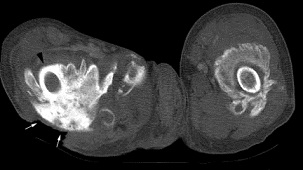 Alkaline Phosphatase: (ALP)[5]
• Frequently used in early detection of HO
ALP values are increased in early HO and plateau at ~4 weeks[3]
• Cannot be used to draw clinical conclusions about maturity or recurrence of HO
• Acute fractures often have similar ALP values, limiting the usefulness of ALP values in diagnosis of HO[3]

Clinical Note: the lack of simple objective measures in detecting heterotopic bone formation causes HO to be misdiagnosed in the early stages, leading to delayed treatment.[6]

Evidence shows that there are no systemic effects secondary to the formation of heterotopic ossification. The most common sites where this condition presents are the hips, knees, spine, elbow, wrists, hands, and any site which is involved in a traumatic event.

The most common conditions found in conjunction with heterotopic ossification:[4] [2] 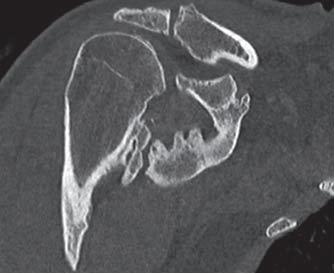 The treatment of heterotopic ossification is largely dependent on the amount of ectopic bone formation, the location and the associated functional limitations of the patient.

The first goal of medical management is to identify those patients at risk for developing HO and treating them prophylactically. Research supports two other approaches for the medical management of HO: 1)surgical excision and 2) radiation therapy.

Further research needs to be done in this area, however there are currently experimental options. These include:

Medications are prescribed to patients who are at risk for developing heterotopic ossification for preventative measures and to aid in the treatment after formation of heterotopic lesions. The two types of medications shown to have both prophylactic and treatment benefits are as follows: 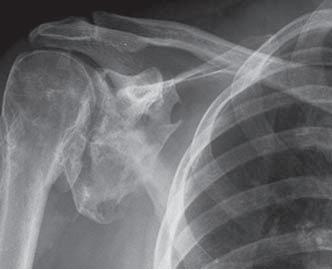 AP x-ray of same shoulder as above (Chao et al.)

Clinical Note: Clinicians must be aware of potential complications (mainly GI related) with patients taking NSAIDS on a routine basis.

The above timetables were established to determine the most optimal timing of surgical intervention. Clinicians must determine if the lesion has reached maturation before surgical excision to decrease the risk of intraoperative complications such as hemorrhage, and the reoccurrence of the ectopic lesion.[9] The use of bone scans to determine metabolic activity of the lesion and serum ALP levels are common aids in this decision making process. 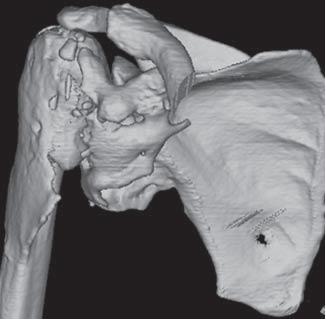 It is recommended that a rehabilitation program should start within the first 24 hours after surgery. The program should last for 3 weeks to prevent adhesion.[7]

Physical therapy has been shown to benefit patients suffering from heterotopic ossification. Pre-operative PT can be used to help preseve the structures around the lesion. ROM exercises (PROM, AAROM, AROM) and strengthening will help prevent muscle atrophy and preserve joint motion.

Clinical note: caution must be taken when working with patients with known heterotopic lesions. Therapy which is too aggressive can aggravate the condition and lead to inflammation, erythema, hemorrhage, and increased pain.

Post-operative rehabilitation has also shown to benefit patients with recent surgical resection of heterotopic ossification. The post-op management of HO is similar to pre-op treatment but much more emphasis is placed on edema control, scar management, and infection prevention. Calandruccio et al. outlined a rehabilitation protocol for patients who underwent surgical excision of heterotopic ossification of the elbow. The phases of rehab and goals for each phase are as follows:[6] 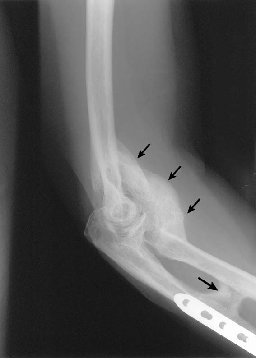 Heterotopic ossification of the elbow

Casavant and Hastings also provide great insight into the evaluation and management of heterotopic ossification in their article titled Heterotopic Ossification about the Elbow: A Therapist’s Guide to Evaluation and Management.[7]

Clinical Note: The two studies used above were primarily focused on rehabiliatation of the elbow secondary to heterotopic ossification. However, the goals and stages of the rehabilitation process can be used as a guide when treating at other sites.

This case details the complications one man experienced due to the development of post-operative Heterotopic Ossification in his lumbar spine.

Patient demonstrates decreased lumbar ROM, with a history of trauma to the lumbar spine due to the lumbar disc arthroplasty. These factors and the positive imaging resulted in the patient being diagnosed with HO.

Patient elected to undergo surgical removal of his lumbar arthroplasty with fusion of L5/S1 and HO decompression. Patient returned to physical therapy post operatively for recovery.

A Case of Psoas Ossification from the use of BMP-2 for Posterolateral Fusion at L4-L5.

Heterotopic Ossification of the Ulnar Collateral Ligament: A Description of a Case in a Top Level Weightlifting Athlete.

The Mystery of Heterotopic Ossification and How it Affected My Life