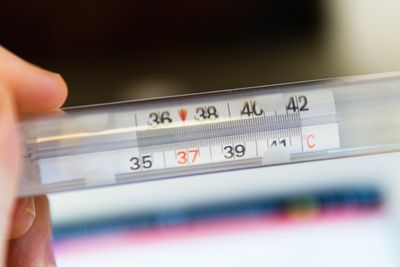 The normal temperature of the human body is considered to be 37 degrees C and varies by about 0.5 degrees C through the course of the day. This minor variation of the core temperature is the result of many normal physiological processes of the human body, including sleep/wake cycles, metabolic changes, hormone variability, and activity levels. In fever, however, the increase in the core body temperature is often greater than 0.5 degrees C and attributed to a fever-inducing substance (pyrogen)[1].

Many disorders can cause fever. They are broadly categorized as

Virtually all infectious illnesses can cause fever. But overall, the most likely causes are

Most acute respiratory tract and gastrointestinal infections are viral.

Body temperature is determined by the balance between heat production by tissues, particularly the liver and muscles, and heat loss from the periphery. Normally, the hypothalamic thermoregulatory centre maintains the internal temperature between 37° and 38° C. Fever results when something raises the hypothalamic set point, triggering vasoconstriction and shunting of blood from the periphery to decrease heat loss; sometimes shivering, which increases heat production, is induced. These processes continue until the temperature of the blood bathing the hypothalamus reaches the new set point.

The hypothalamus (see gif R), which sits at the base of the brain, acts as the body's thermostat. It is triggered by pyrogens, which flow from sites where the immune system has identified potential trouble to the hypothalamus via the bloodstream. Some pyrogens are produced by body tissue (cytokines); many pathogens also produce pyrogens. When the hypothalamus detects them, it tells the body to generate and retain more heat, thus producing a fever. Children typically get higher and quicker fevers, reflecting the effects of the pyrogens upon an inexperienced immune system.[3]

Although many patients worry that fever itself can cause harm, the modest transient core temperature elevations (ie, 38 to 40° C) caused by most acute infections are well tolerated by healthy adults[2].

Human beings live in a very narrow survival zone. Significant deviations from average in this tightly controlled physiological variable can quickly become life-threatening.[4] eg. Internal body temperatures in excess of 105 degrees F expose proteins and body fats to direct temperature stressors. This form of heat distress can threaten the integrity and function of proteins accustomed to the body's usual temperature variations and the occasional less excessive fevers. Cellular stress, infarctions, necrosis, seizures and delirium are among the potential consequences of prolonged, severe fevers. The receptor environment at the hypothalamus maintains limitations on high fevers. In the rare instances in which the hypothalamus itself malfunctions, the result is typically low body temperature, not elevated body temperature[3]. 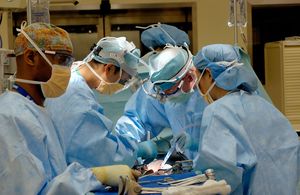 Postoperative fever is a common occurrence of all surgery. Because there are so many causes of fever, the problem is usually managed by an interprofessional team of healthcare professionals. The nurse is probably the first person who monitors the patient and discovers the fever. In order to know the cause: 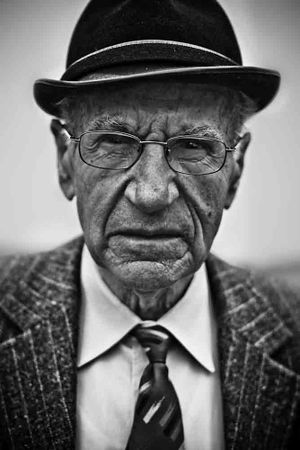 In frail older adults, infection is less likely to cause fever, and if elevated by infection, temperature often it is lower than the standard definition of fever. Also inflammatory symptoms, such as focal pain, may be less prominent. Frequently, alteration of mental status or decline in daily functioning may be the only other initial manifestations of eg pneumonia or urinary tract infection.

Fever management should take into consideration the protection of the brain from secondary insults as well as the capacity to fight against infections. Fever should most likely be treated aggressively in the first days of TBI, SAH, or stroke.

A temperature reading will differ depending where on the body you measure it; some of the common sites include in the mouth, in the ear, under the armpit, on the forehead, or rectally. 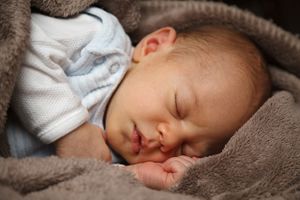 A fever is an attempt to create an environment that is not conducive to viral replication, while the increase in sleep allows the body to devote most of its energy on fighting the virus instead of focusing its energy on wakeful tasks. The hypothalamus induces a need for sleep during a fever.

During sleep, the flow of cerebrospinal fluid in the brain increases dramatically, washing away harmful waste proteins that build up between brain cells during waking hours[7], This process is even more crucial as the body fights an infection and is dealing with a surplus of proteins that need to be removed from the spaces between neurons. Essentially, all of this debris can act to obstruct or slow normal metabolic function and can attribute to the “foggy headed” feeling.

Sleep deprivation is a no-no when it comes fighting the flu. Sleeping lets the body focus its energy on fighting the virus, allowing the body to wash away the waste products lodged in between the brain cells.

Common causes of fever in the different subclasses are discussed below:

In modern medicine, FUO remains one of the most challenging diagnoses as it can be caused by over 200 neoplastic, infectious, inflammatory, and miscellaneous disorders. Diagnosing FUO requires a thorough history, repeated physical examinations, and selective diagnostic testing.[8]