Worldwide, traumatic brain injury (TBI) is a leading cause of death and disability in persons aged <45 years. Per the World Health Organization (WHO), approximately sixty-nine million people experience a TBI annually. TBI is a significant concern to public health and rehabilitation professionals as it is associated with both acute and long-term disabilities.[1]

Acquired brain injuries can also be congenital in origin[2], resulting in potentially lifelong rehabilitation needs from a well-trained and educated interdisciplinary team.

Traumatic Brain Injury (TBI) is “an alteration in brain function, or other evidence of brain pathology, caused by an external force”.[3] It occurs when an external force impacts the brain, and often is caused by a blow, bump, jolt or penetrating wound to the head. However, not all blows or jolts to the head cause traumatic brain injury, some just cause bony damage to the skull, without subsequent injury to the brain. Mild traumatic brain injury is now more commonly referred to as Concussion.

The two most common causes of traumatic brain injury are Falls and road traffic accidents (RTA), which includes vehicle collisions, pedestrians being hit by a vehicle, vehicle-cyclist and car-motorcyclist collisions as well as bicycle and motorbike crashes which do not involve another vehicle. Until recently, road traffic accidents were the primary cause of traumatic brain injury, but an international study published in 2013 reported that "falls have now surpassed road traffic incidents as the leading cause of this injury". [6]

Traumatic brain injury in sport has become more recognised with clearly emerging long-term consequences. Many professionals have become involved in developing evidence related to the complexity of symptoms, the impact of the repetitive nature on brain health and long-term prognosis of sport-related concussion. Evidence for sports-specific assessment and treatment as well as the role of sport in brain degenerative diseases are emerging and this is promoting steps to increase the safety of those participating in sports like rugby, football, boxing, horse riding, and racing, American football, or ice hockey. A systematic review carried to find whether the head guards protect against injuries to boxers indicates that concussions and other head injuries are present in boxing with or without head guards. A headguard is effective at protecting against facial cuts and skull fractures, and a strategy to protect boxers might be to introduce regulations that lower the frequency and force of blows to the head by incorporating technology into head guards will help understand the type and size of force sustained by boxers, however, further studies on boxing, headguards, and head injury prevention are needed.[7]

Global conflicts have exposed the military and civilian participants to new types and severities of injuries, but also led to the development of improved subacute care and life-saving and neurosurgical procedures,[8] which have also benefited civil healthcare services. 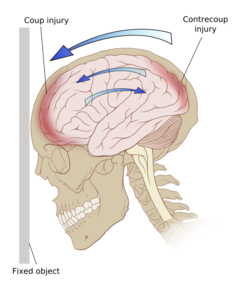 Post-acute traumatic brain injury, all patients are encouraged to undergo an urgent neurological examination in addition to a surgical examination.[12] Magnetic Resonance Imaging (MRI) and Computerised Tomography (CT) scanning are frequently used in order to image the brain. CT scanning is indicated in the very early stages of post-injury. A CT scan can show potential fractures and can detail haemorrhages and haematomas in the brain, as well as contusions and swelling. An MRI is often used once the patient is medically stable to give a more detailed view of their brain tissue. The EFNS (European Federation of Neurological Societies) guidelines provide a basis for the use of CT scans based on clinical signs and symptoms (see below).