The hypothalamus is an organ central to many autonomous functions of the human body, notably the regulation of homeostasis. 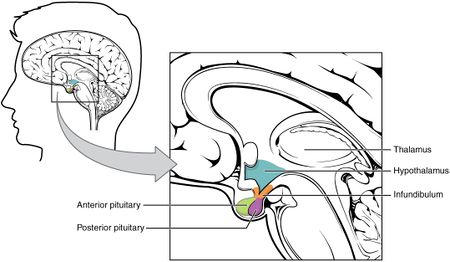 The hypothalamus is found underneath the thalamus and comprises the floor of the third ventricle (one of four open spaces in the brain through which cerebrospinal fluid flows). The hypothalamus extends downward from the brain into a stalk known as the pituitary stalk (or infundibular stalk), which connects it to the pituitary gland.[2]

The hypothalamus has three main regions (anterior, medial and posterior). Each one contains different nuclei. These are clusters of neurons that perform vital functions, such as releasing hormones.

Hormones of the Hypothalamus[edit | edit source]

To maintain homeostasis, the hypothalamus is responsible for creating or controlling many hormones in the body. The hypothalamus works with the pituitary gland, which makes and sends other important hormones around the body.

Together, the hypothalamus and pituitary gland control many of the glands of the endocrine system. This includes the adrenal cortex, gonads, and thyroid.

Hormones secreted by the hypothalamus include:

The hypothalamus also directly influences growth hormones. It commands the pituitary gland to either increase or decrease their presence in the body, which is essential for both growing children and fully developed adults[3]. 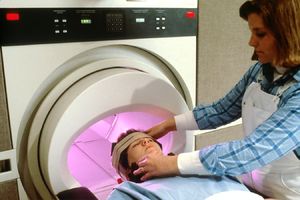 The symptoms that indicate a hypothalamic disorder include:

Overall, the hypothalamus is a small region present in the centre of the brain, which plays a major role in signalling the Pituitary Gland to release hormones to the rest of the endocrine system[4].