A condition during which a person eats a large amount of food in a short amount of time (binges), then uses some method of purging to avoid weight gain. Methods of purging include self-induced vomiting, use of laxatives or diuretics, and excessive exercise. [1]

Criteria for Bulimia Nervosa According To Cleveland Clinic[2]:

3. The binge eating and inappropriate compensatory behavior both occur, on average, at least twice a week for 3 months.

4. Self-evaluation is unduly influenced by body shape and weight.

5. The disturbance does not occur exclusively during episodes of anorexia nervosa.

Types of Bulimia Nervosa According to Cleveland Clinic[2]:

The incidence of people suffering from bulimia has increased over the last 30-40 years. Around 1 to 2% of females in late adolescence and adult women meet the diagnostic criteria for bulimia nervosa. [4] About 80% of people with bulimia nervosa are female [5] and 1.5% of American women suffer from bulimia nervosa in their lifetime.[6]. The Standard mortality ratio (SMR) for Bulimia Nervosa is 1.93.[7]

Bulimia can affect anyone; male, female, young, old, and all races. These patients can present with normal weight or they may be underweight or overweight. The patient may use pills (diet pills, diuretics, or laxitives). They may often take trips to the bathroom after eating (suggested that they use this time to purge after a meal) and may exercise despite weather, injury, or energy levels to control their weight. [1]

Signs of bingeing include[5]:

Signs of purging include[5]:

Signs of self-induced vomiting include[8]:

May also present with other mental health problems such as depression, anxiety, substance abuse, distorted body image (thoughts and verbal expressions of hating body, image of being fat despite thin appearance, and fear of gaining weight), and reports from family and friends on activity not "normal" for the person (i.e. moody, sad, unsocialable)

Physical Signs and Symptoms can include[9]:

Behavioral signs and symptoms can include[9]:

Anti-depressant medications have been found to be effective, especially when combined Cognitive Behavior Therapy, versus the medication only or therapy only. [11]

SSRIs tend to be used initially, as they tend to be both effective and safe. Fluoxetine (Prozac) is the only FDA-approved anti-depressant medication for treatment of bulimia. Bupropion (Wellbutrin) has been proven to be effective, however, contraindicated because of its association with seizures in patients who purge. Anti-depressants are often used because of the accompanying psychological symptoms (i.e. anxiety, depression, etc.); however, studies have found these medications to be effective in patients who do not have anxiety and/or depression co-morbidities. This suggests that anti-depressants can specially treat symptoms of bulimia (i.e. binges, purging, pre-occupation with body image). [12][11]

Other medications that are gaining recognition for effectiveness include topiramate and ondansetron (Zofran). Topiramate is an anti-convulsant that has been found to be effective in decreasing the frequency of bingeing and purging , as well as improving the associated psychological co-morbidities. Mild to moderate adverse side effects have been found with using topiramate in patients with bulimia; however this finding was based on a small study and would need further investigation. Ondansetron is an anti-emetic used in cancer patients to help prevent nausea and vomiting. Findings are based on small studies, further investigation is needed to address all aspects of how this anti-emetic could effectively treat bulimia.

More studies are needed on long-term effectiveness of pharmacological treatment of bulimia; also, few studies have been done on the effects of medications of adolescents, as most studies have looked at effects on adults. One study (a study on adults) performed was flawed by “attrition in both study drug (fluoxetrine) and placebo arms.” The study found “a lower rate of relapse for the fluoxetrine group, but the investigators noted a worsening on all measures of efficacy over time. They concluded that pharmacotherapy alone may not be adequate treatment after acute response for most patients… less than 20% acute phase remission rate” was also found in this study. This finding on remission rates has been found to be consistent with data from other studies, suggesting “that the vast majority of responders (i.e. a 50% or greater decrease in weekly vomiting episodes) were still bingeing and purging at the beginning of maintenance therapy, indicating that the idea of relapse prevention may be dubious in most trial participants.”[12]

In diagnosing bulimia nervosa, patients must meet specific criteria. Patients can NOT simultaneously meet the diagnostic criteria for anorexia nervosa.  To meet the bulimia nervosa criteria, a patient binges and then engages in "inappropriate compensatory behavior at least twice weekly for at least three months." [4]

There have been no specific things proven to cause bulimia. Triggers to bulimia nervosa have been suggested, including dieting, stress, emotions, and the need for control (to ease stress or anxiety in a person's life). Factors that are suggested to contribute to bulimia include culture, family history, stressful life event, personality, and biology. [1]Rarely it is one factor in causing bulimia, often it is found that genetics, psychological factors, family and societal pressures, and/or cultural influences. [13] A recent study by Luther et al[14] reported that glucagon-like peptide 1 (GLP1) levels are low in patients with bulima nervosa.[15][16]

Complications from bulimia can include:

A diagram from womenshealth.gov, showing how bulimia can result in complications throughout your body: 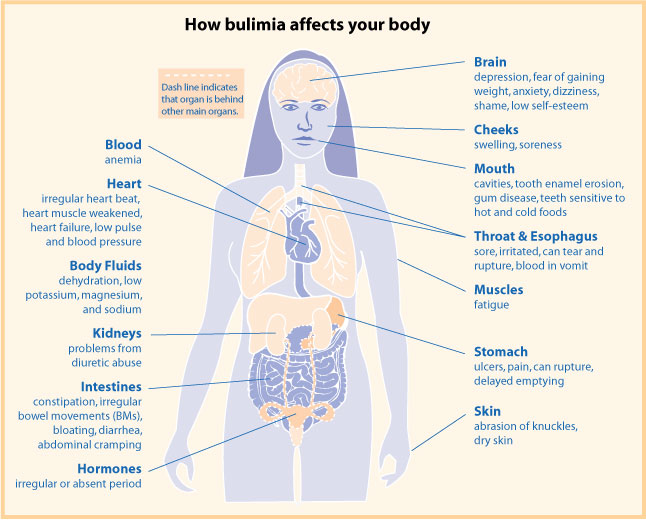 Typical treatment for people with bulimia nervosa includes a multi-disciplinary approach; a treatment team usually involves a primary care physician, a dietitian/nutritionist, a mental health professional, as well as nurses and other supportive medical personnel. [4]

The treatment process: the initial assessment addresses the patient's past medical history, current symptoms, current physical and mental status, the way the patient controls their weight, and any psychiatric issues/disorders (i.e. depression, anxiety, etc.). A physician and dietitian are consulted, developing a diagnosis and place of care for the patient. Most people with bulimia are treated on an outpatient basis; however their treatment is coordinated between their physician, psychotherapist, and dietitian. [4]

Some patients choose to be treated without mental health professionals, while others only receive treatment from mental health professionals. Psychotherapy includes cognitive-behavoiral therapy, behavior therapy, family therapy, and interpersonal psychotherapy. Some patients are successful with short-term treatments such as these, others require long-term.[4]

Some patients are treated with psychopharmacology. Psychiatric medications have been found to be successful in treating patients with bulimia; these medications often include anti-depressants. [4]

Nutritional counselling is also a treatment option and a vital component for patients diagnosed with an eating disorder. Dietitians serves as educators to both the patient and their families. Dietitians help patients with bulimia to normalize their eating behaviors. [4]

Some patients diagnosed with bulimia have complications secondary to their disorder, thus requiring treatment beyond that for their eating disorder. These treatments vary according to the severity of systemic involvement and complications.[4]

"Indications for Hospitalization (according to the Cleveland Clinic's Continuing Education Center):

In severe cases of bulimia, patients require in-patient treatment. This treatment provides the patient with a more structured environment, providing treatment and monitoring twenty-four hours a day, every day of the week. These programs are often arranged in a "step up" and "step down" levels allowing patients to progress (or for some, regress) in their treatment accordingly. For patients that need it, long-term in-patient programs are also available (i.e. residential treatment programs). [4]

Physical therapists can help with early screening and detection of and for eating disorders. The more informed a clinician can be, the more they are able to provide appropriate evaluations and interventions for their patients, helping to decrease the consequences and complications of the eating disorder. Recognizing at risk patient populations can also help with early detection; i.e. young, female athletes are at a higher risk for the female athlete triad. [21]

At risk patient populations can include females, those with a perfectionist personality, Caucasians, personal and/or family history of eating disoders or obesity, athletes, and patients with a history of trauma or sexual abuse. As a physical therapist, recognizing and being aware of patients with a distorted body image or distorted eating habits is also important. Some athletes who compete under-weight classes or must build up their bodies for competition can be at risk for developing eating disorders. [9]

Some questions to consider as physical therapists screening for eating disorders include:

Bulimia impacts a patient's fluid and electrolyte balance, putting them at risk for fluid depletion and ineffective temperature regulation. These, in addition to the use of self-induced vomiting or laxatives, can put the patient at a very high risk for dehydration and loss of potassium. Patients with these complications may initially present with muscle cramping, fatigue, as well as orthostatic hypotension. A physical therapist may have to hold treatment of their patient until fluid and electrolyte imbalances are normalized. It is important that the physical therapist encourage their patient to drink plenty of fluids and reduce their activity until levels are normalized. Patients with severe dehydration and electrolyte imbalances may present with confusion, disorientation, uncoordinated movements. These patients should be sent for immediate medical attention. Another consideration for physical therapists is the effects bulimia can have on bone; patients presenting with an orthopedic problem may also have bulimia. Often times, bone integrity is weakened, which is something as a therapist should be aware of if thrust manipulations are being considered in the treatment plan. [21]

In a study by Carei et al, an individualized yoga treatment program was established for patients with eating disorders (including anorexia nervosa, bulimia nervosa, and other eating disorders). This study, while small, did find success, the patients' preoccupation with food was decreased after their yoga sessions and no negative effect was found on the patients' BMI. The yoga program was used in addition to standard care[24].  An abstract to this study can be accessed from: http://www.ncbi.nlm.nih.gov/pubmed/20307823