Ankle and foot injuries are common musculoskeletal injuries with a high prevalence among professional athletes, but also in recreational sports and as a result of routine daily activities.[1] Typical injuries include sprains, fractures, tears, and inflammation. A good understanding of the foot and ankle anatomy is necessary for the proper diagnosis and treatment of injuries.

The ankle is formed by three bones: the talus, tibia and fibula. The anatomical structure of the foot consists of the hindfoot, midfoot and forefoot, each composed of several bones.

The lower leg and the foot constitute the ankle. The following bony elements of the ankle joint are part of this structure: 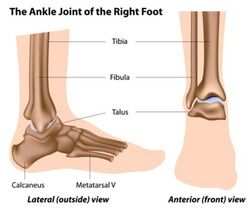 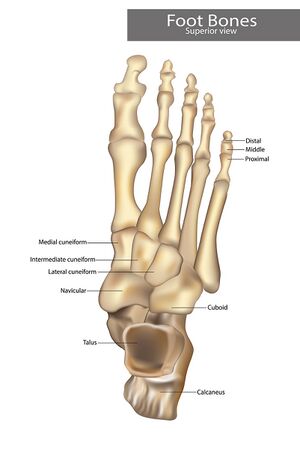 The talus and calcaneus and two tarsal bones form the posterior aspect of the foot, which is called the hindfoot. The midfoot (located between the hindfoot and forefoot) is made up of five tarsal bones: the navicular, cuboid, and medial, intermediate, and lateral cuneiforms. The most anterior aspect of the foot including the metatarsals, phalanges, and sesamoid bones is called the forefoot. Each digit, except for the great toe, consists of a metatarsal and three phalanges. The great toe has only two phalanges.

The foot and ankle provide various important functions which include bodyweight support, balance maintenance, shock absorption, response to ground reaction forces, or substitution for hand function in individuals with upper extremity amputation.[2] The foot and ankle have a crucial role in gait and posture and malalignment can cause other problems such as back pain or mobility limitations.[3][4] 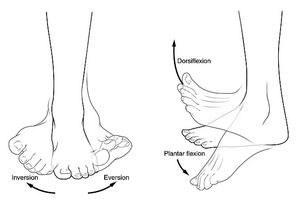 The talocrural joint (TC or sometimes called a tibiotalar joint) is referred to as the ankle joint. The joint is framed laterally and medially by the lateral and the medial malleolus and from the top by the tibia and the talus.[5] Sagittal plane dorsiflexion and plantarflexion are the primary movements in this joint.

The hindfoot has a talus and calcaneus articulation called a subtalar joint (ST, also known as the talocalcaneal joint). Three facets of the talus and of the calcaneus are part of this joint. The main motions are inversion and eversion of the ankle and hindfoot.

The talonavicular and calcaneocuboid joints are known as Chopart's joint (MT, midtarsal or transverse tarsal joint) and is located between the hindfoot and midfoot. This joint allows forefoot rotation. The navicular and all three cuneiform bones compose articulation distally. In addition to the navicular and cuneiforms bones, the cuboid bone has a distal articulation with the base of the fourth and fifth metatarsal bones.

The tarsometatarsal joint (TMT or Lisfranc's joint) connects the midfoot with the forefoot and originates from the lateral, intermediate and medial cuneiforms articulating with the bases of the three metatarsal bone (1st, 2nd, and 3rd). The small movement that occurs in the joint is described as dorsal and plantarflexion.[6] The bases of the remaining metatarsal bones (4th and 5th) connect with the cuboid bone.[5]

The five rays, metatarsal and corresponding phalanges create the forefoot medial and lateral columns where rays 1,2, and 3 belong to the middle column, rays 4 and 5 to the lateral column. The metatarsophalangeal joints (MTP joints) are the main components of the forefoot.[5] Each toe, except for the great toe, has proximal and distal interphalangeal joints (IP joints). The latter has only one IP joint.

Below is a summary of the ankle and foot articulations

Acute and chronic ankle pains are often associated with either ligament injury or ligament laxity.[7] The ligaments of the ankle consist of the medial ligaments (the deltoid ligament), the lateral ligaments, and the ligaments connecting the distal epiphyses of the tibia and fibula called the tibiofibular syndesmosis.[7]

There are 4 main ligaments of the foot: the plantar fascia ligament, the plantar calcaneonavicular ligament (known as a spring ligament), the calcaneocuboid ligament, and the Lisfranc ligaments. 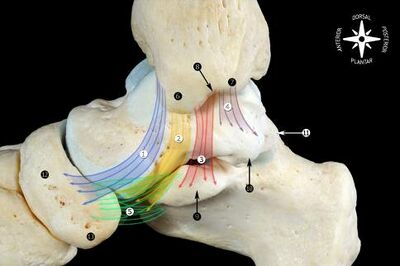 There are various descriptions of the medial collateral ligament(MCL), but the definition provided by Milner and Soames (1998) is the most commonly accepted.[9] The authors divide the MCL into two layers: superficial and deep layers with bands either always present or which presence will vary (bands that are always present are in italic):

It is important to mention that the dissection revealed the continuous nature of these ligaments and individual bands were impossible to distinguish.[7]

The characteristic of the MCL:

Interconnections between the ATFL, CFL, and PTFL via medial connecting fibres lead to the formation of an anatomical and functional lateral fibulotalocalcaneal ligament complex.[10] [11]

A fatty synovial fringe located distal to the ligament insertion is also part of this structure. Its upward and downward movement occurs during ankle movement and alters its placement between the tibia and the fibula. This adipose tissue is considered a cause of a syndesmotic impingement following an ankle sprain.

Ligaments of the Foot[edit | edit source]

The main function of the short and long plantar ligaments and the calcaneonavicular ligament (spring ligament) is to assist in the passive maintenance of the arch.

You can now watch this short video on how to palpate important anatomical structures of the foot and the ankle.

Anatomy of the Ankle Ligaments: A Pictorial Essay[8] - In this pictorial essay, the ligaments around the ankle are grouped, depending on their anatomic orientation, and each of the ankle ligaments is discussed in detail.