The navicular bone is one of the seven bones which make up the tarsus of the Ankle and Foot. It is located on the medial aspect of the foot, next to the cuboid bone, anterior to the head of the talus and posterior to the cuneiform bones. It is one of the five bones of the midfoot[1].

The navicular is a small irregular bone with its shape being described as pyriform[3]. Its posterior surface is concave and there are two faint ridges anteriorly to correspond with the articulation with the three cuneiform bones. There is a large protuberance on the inferomedial aspect of the navicular bone called the navicular tuberosity [1] which is often simple to palpate in the area directly anteroinferior to the medial malleolus. 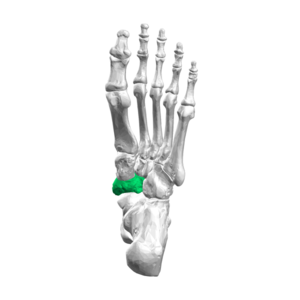 Inferior aspect of the foot with navicular bone highlighted.

The navicular is sometimes referred to as the keystone of the medial longitudinal arch of the foot, corresponding to its location at the peak of the arch and its role in maintaining the arch of the foot.

The acetabulum pedis is the common name for the talocalcaneonavicular joint and forms the subtalar articular complex along with the posterior talocalcaneal joint. It has some of the morphological characteristics of a ball and socket joint which led to its name[4]. The skeletal structures included are the posterior articular surface of the navicular bone, and the anterior and middle articular surface of the calcaneus that articulate with the head and the anteromedial surface of the talus. These bones are stabilized by the plantar calcaneonavicular ligament (spring ligament) on the medial aspect and the lateral calcaneonavicular ligament (a component of the bifurcate ligament) on the lateral aspect.[4] 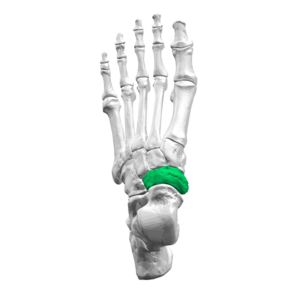 Superior aspect of the foot with navicular bone highlighted

There are many ligamentous attachments to the navicular bone. The plantar calcaneonavicular ligament attaches inferiorly and is otherwise known as the spring ligament. It is a group of ligaments that connect the navicular to the calcaneus, forming a type of socket for the head of the talus, although the extent of its structure and morphology is debated in the literature [5]

The superomedial calcaneonavicular ligament originates from the anteromedial margins of the sustentaculum tali on the talus bone. From there, it extends in an anterodorsolateral direction to the posterior aspect of the navicular and also attaches to the posterior tibial tendon [4]

There are several clinical conditions which involve the navicular directly. The navicular is often subject to developing stress fractures and can lead to Navicular stress syndrome. Müller Weiss syndrome is a spontaneous adult onset osteonecrosis of the navicular bone which may be picked up radiographically. In children, there is also a similar condition, although distinct from Müllers Weiss syndrome called Koehlers syndrome[7].

One common association is the abnormality called Accessory Navicular Bone,

The navicular is also used clinically within the Navicular Drop Test which may be used as a measure of foot pronation.