The human body is made of trillions of cells, which group together to form different tissues and organs. But humans are not entirely humans. The human body is host to many millions of microbes. In fact, microbes are the most numerous and diverse organisms on Earth. They are present everywhere, in the air, soil, plants, animals, under the earth. A human body is an ecosystem, and each of us carries an incredible diversity of microbes[1]. 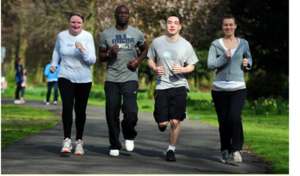 Studies now reveal that exercise can have a very beneficial effect on the gut microflora.

Human microbiota is a community of microbes residing in and on the human body. It consists of the 10-100 trillion symbiotic microbial cells harboured by each person, primarily bacteria in the gut[1]. It refers to the entire population of microorganisms that colonizes a particular location; and includes not just bacteria, but also other microbes such as fungi, archaea, viruses, and protozoans.

The relation between the gut microbiota and human health is being increasingly recognized. It is now well established that a healthy gut flora is largely responsible for the overall health of the host. The normal human gut microbiota comprises of two major phyla, namely Bacteroidetes and Firmicutes.[4] Though the gut microbiota in an infant appears haphazard, it starts resembling the adult flora by the age of 3 years. There exist temporal and spatial variations in the microbial distribution from the oesophagus to the rectum all along the individual’s lifespan. Developments in genome sequencing technologies and bioinformatics have now enabled scientists to study these microorganisms and their function and microbe-host interactions in an elaborate manner both in health and disease states.

Several factors[4] play a role in shaping the normal gut microbiota. They include:

Mode of delivery (vaginal or cesarean) baby's first microbes primarily come from his or her mother's vaginal microbiome (the lactobacillus, which is a genus of bacteria containing many species that are important for human health) and for a newborn delivered by C-section, the baby's first microbes resembles those microbes found on the human skin. It is now seen that Cesarean births are also associated with higher rates of a broad range of diseases, including asthma and food allergies. Some of these issues could be attributed to microbes. but it's an active area of research.

Use of antibiotics[edit | edit source]

The use of antibiotics can destroy the bad as well the good microbes and that it may take a year to recolonize the good microbes in the gut. Reduced variation in microbiota has been associated with these health problems, while increased diversity has been linked to a favourable metabolic profile and immune system response.

A clean, dirt-free environment can destroy the microbiome. Microbiome can be preserved and protected by avoiding harsh laundry products, antibacterial soaps, and hand-wash, shampoo which target the skin and mouth microbiome.

Exercise influences the gut microbiota, stimulating the development of gut bacteria. A major study conducted on elite rugby players demonstrated that exercise enriched the diversity of gut microflora(greater diversity among the Firmicutes phylum that helped to maintain a healthier intestinal environment) and positively correlated with protein intake and creatine kinase levels. These results indicated that both diet and exercise determined the microbial biodiversity of the gut[5]. The study published in Microbiome in 2016 shows that cardio-respiratory fitness is correlated with increased microbial diversity in healthy humans. The microbial profiles of fit individuals favour the production of butyrate. As increased microbiota diversity and butyrate production[6] is associated with overall host health, the findings warrant the use of exercise prescription as adjuvant therapy in combating dysbiosis-associated diseases. Exposure to sunlight also alters the gut microbiome. A study showed that vitamin D deficiency changes intestinal microbiome, reducing the vitamin B production in the intestine, thereby adversely affecting the immune system, causing pro-inflammatory state associated with autoimmunity and atherosclerosis.So exercise and dietary Vitamin B and D supplementation can be used as a therapeutic intervention in the management of inflammatory and autoimmune conditions[7].

As health care professionals promoting exercise and physical fitness we should be educating our clients about this added bonus exercise delivers. Exercise can be used as a treatment to maintain the balance of the microflora or to re-balance eventual dysbiosis (impaired microbiota), thus obtaining an improvement of the health status.

Physiotherapists see a diverse range of health conditions many of which can directly benefit from these findings. These include, but are not limited to,

Further studies are needed to fully understand the mechanisms that determine changes in the composition and functions of the microflora caused by exercise and all their related effects[10]. Movement enriches microflora diversity and overall health.

Just another substantial reason to promote exercise for overall health and well being!