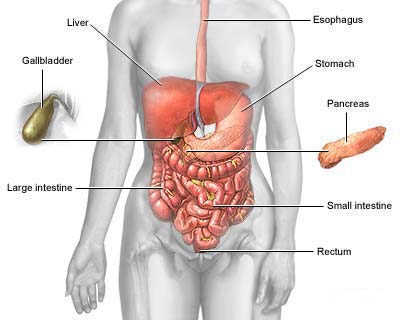 Irritable bowel syndrome (IBS) is the most common disorder of the GI system, with symptoms predominantly including diarrhoea, constipation, or a combination of both. IBS is considered a functional disorder of motility in the small and large intestine, due to no detectable abnormality of the bowel [1]. IBS can also be referred to as nervous indigestion, functional dyspepsia, spastic colon, irritable colon, pylorospasm, spastic colitis, intestinal neuroses, and laxative or cathartic colitis[2].

IBS is one of the most commonly diagnosed GI disorders, with a prevalence of 10% to 20% worldwide, and accounting for 50% of sub-speciality referrals in Western society[2][1]. While the prevalence remains high, it is estimated the 25% of Americans experience symptoms of IBS without ever seeking treatment for the disorder[2].

Many people experience occasional symptoms that can be seen with IBS, however, these are some common characteristics of people with the syndrome:[3]

GI symptoms associated with IBS are highly variable, normally intermittent and can include but are not limited to the following: [1]

Pain characteristics include a dull, deep discomfort with sharp cramps in the lower left quadrant of the abdomen. Abdominal pain normally occurs in the morning or after eating and is relieved by evacuation of the bowels[2]. 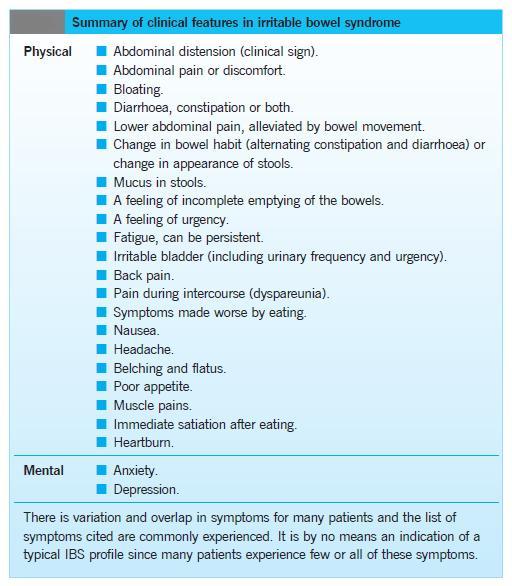 There are variations and overlap in symptoms for many patients and the variety of symptoms cited are commonly experienced. It is by no means an indication of a typical IBS profile since many patients experience few or all of these symptoms[4].

Diarrhoea and constipation, both signs of irritable bowel syndrome, can aggravate haemorrhoids. In addition, if you avoid certain foods, you may not get enough of the nutrients you need, leading to malnourishment.

But the condition's impact on your overall quality of life may be the most significant complication. IBS is likely to limit your ability to:

For further information visit this link for a slideshow on IBS:  http://www.rxlist.com/irritable_bowel_syndrome_slideshow/article.htm

Irritable bowel syndrome is often linked to psychological factors including disturbances in circadian rhythm, history of abuse, anxiety, and depression[2][1]. It has also been seen with many other pain syndromes and functional disorders such as fibromyalgia, chronic fatigue syndrome, temporomandibular joint disorder, chronic pelvic pain, and dysmenorrhea [2][1].

Since people with IBS can have a slower intestinal transit time, resulting in constipation, the use of fibre supplements such as polycarbophil (FiberCon), psyllium seed (Metamucil), and increased intake of water and other fluids is advised. There is also good evidence that antispasmodics and anticholinergics such as dicyclomine, hyoscyamine, and peppermint oil are effective in treating symptoms. Furthermore, antidepressants (specifically selective serotonin reuptake inhibitors and tricyclic antidepressants) have been shown to reduce abdominal pain and other IBS symptoms. Rifaximin, an unabsorbable antibiotic, has also shown marked improvement in the treatment of diarrhoea. Lastly, Loperamide can be taken to improve the frequency and consistency of bowel movements but does not affect other symptoms of the disorder [2].

Aimed at the theory of bacterial overgrowth, continued research on the effectiveness of probiotics on IBS symptoms shows that Bifidobacterium Infantis has some efficacy in symptom reduction, however, it is still unknown whether other probiotics are as effective.

Two medications are currently approved for specific cases of IBS [3]: 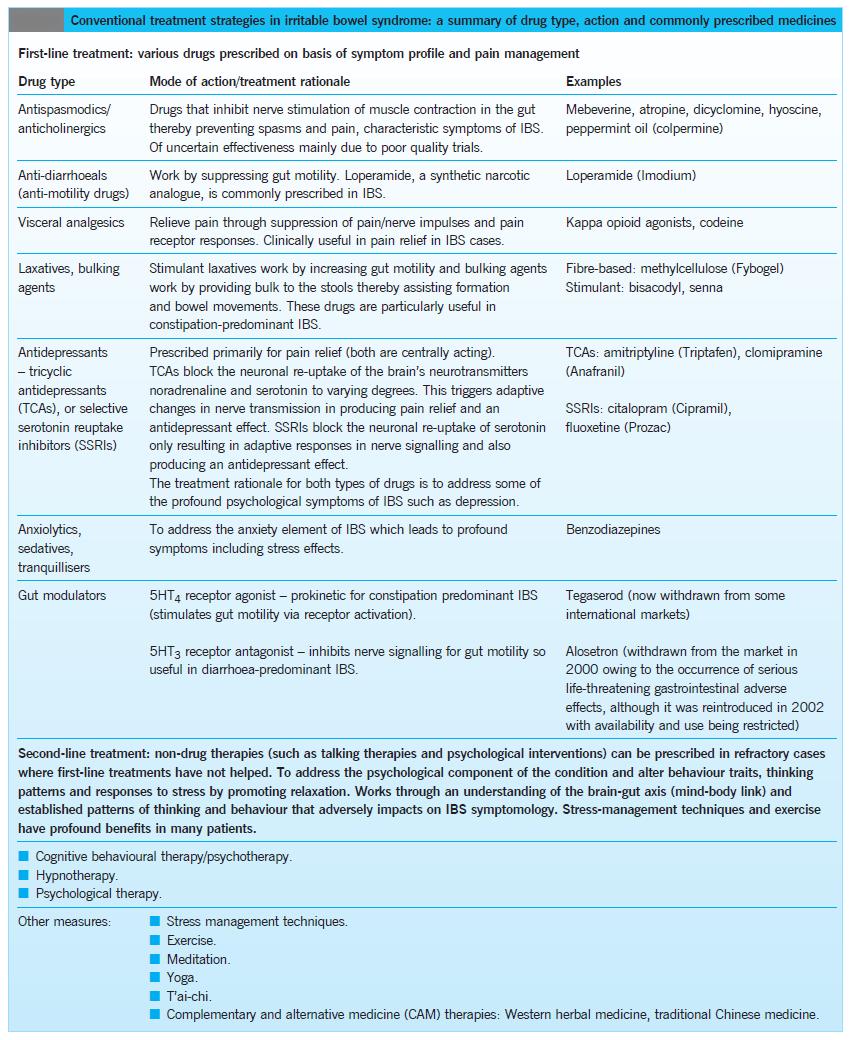 Because there are no physical signs or abnormalities associated with Irritable Bowel Syndrome, there are currently no definitive tests for diagnosis [2][3]. Therefore, diagnosis is usually based on patient history and two sets of symptom-based criteria:

In conjunction with the above criteria, patients will need to be screened for any red flag symptoms that could suggest another, more serious condition. These red flags are classified by the Rome III criteria and include:[2]

Diagnosis made using the Rome III criteria is usually then classified into four different categories of IBS based on the predominant symptoms (Constipation, Diarrhea, and Mixed), as shown in the figure above. [5]

Diagnosis can also be made by ruling out other diseases or disorders. Diagnosis of exclusion may involve one or more tests such as an ultrasound, thyroid function test, endoscopy (rigid/flexible sigmoidoscopy, colonoscopy, barium enema) to examine the colonic lumen for other possible pathology, complete blood count and stool examination to rule out lactose intolerance and the presence of occult blood, parasites and pathogenic bacteria [3].

Your doctor may recommend several tests, including stool studies to check for infection or malabsorption problems. Among the tests that you may undergo to rule out other causes for your symptoms are the following:

Symptom-based (criteria-based) approaches can vary widely in their administration and interpretation from one practitioner to the next and have yet to be standardized over any one health profession [6]." Research is still being done to decide the reliability and validity of different symptom-based criteria as well as their ability in ruling out other pathology and ruling in IBS as the correct diagnosis.

Since the symptoms of Irritable Bowel Syndrome cannot be attributed to any identifiable abnormality of the bowel, it is thought that IBS may involve various abnormalities of gut function:[2]

IBS is characterized by abnormal intestinal contractions theoretically triggered by various causes that differ from person to person. The most common triggers are:

People with IBS have an exaggerated gastrocolic reflex, the signal the stomach sends to the colon to stimulate contractions after food intake. Some cases IBS have no signs of increased GI motility, suggesting an increased internal sensitivity. This enhanced sensation and perception of what is happening in the digestive tract referred to as “enhanced visceral nociception.” In such cases, it may be that the internal pain threshold is lowered for reasons that remain unclear. Individuals with IBS experience pain and bloating at much lower pressures than people without IBS. Serotonin, a neurotransmitter produced in the gut and located inside the enteric nerve cells, may also play a role in the disorder. The GI tract is very sensitive to changes in serotonin levels. It’s possible IBS occurs as a result of abnormalities in serotonin levels responsible for digestive function. Increased levels of serotonin in the gut result in diarrhoea, while decreased levels may account for individuals who have IBS-associated constipation.

It is well documented that individuals with IBS report a greater number of symptoms compatible with a history of psychopathologic disorders, abnormal personality traits, psychologic distress, and sexual abuse. Episodes of emotional or psychologic stress, fatigue, smoking, alcohol intake, or eating (especially a large meal with high-fat content, roughage, or fruit) do not cause but rather trigger symptoms. Intolerance of lactose and other sugars may account for IBS in some people.

Scientists continue to explore the brain-gut connection to better understand IBS and other functional GI disorders. The enteric nervous system is composed of a vast network of neurons located throughout the GI tract. This neuronal network communicates directly with the brain through the spinal cord. There are as many neurons in the small intestine as in the spinal cord, and the same hormones and chemicals that transmit signals in the brain have been found in the gut, including serotonin, norepinephrine, nitric oxide, and acetylcholine. Studies investigating the effects of emotional words on the digestive tract substantiated the close interaction among mind, brain, and gut. Preliminary data demonstrate an increase in intestinal contractions and change in rectal tone during exposure to angry, sad, or anxious words. These changes of intestinal motor function may influence brain perception [2]" 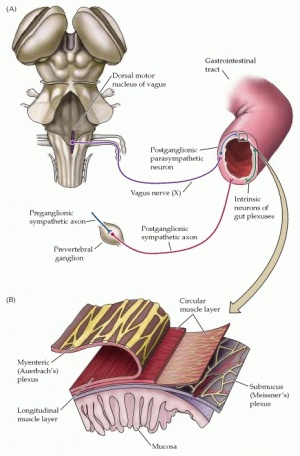 "Organization of the enteric component of the visceral motor system. (A) Sympathetic and parasympathetic innervation of the enteric nervous system, and the intrinsic neurons of the gut. (B) Detailed organization of nerve cell plexuses in the gut wall. The neurons of the submucous plexus (Meissner's plexus) are concerned with the secretory aspects of gut function, and the myenteric plexus (Auerbach's plexus) with the motor aspects of gut function (e.g., peristalsis) [7]." 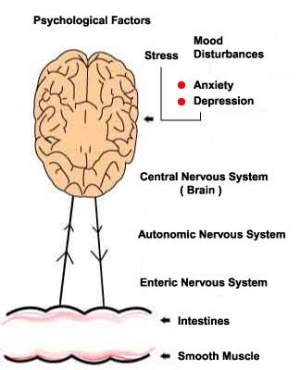 "Psychological factors such as stress, anxiety and depression as well as psychological trauma such as verbal, physical, emotional and sexual abuse have an effect on the intestines by direct connections through the brain-gut axis [8]."

**See medication section above for a list of the recommended medications currently used in treatment of IBS.

A stress reduction program with a regular program of relaxation techniques and exercise in conjunction with psychotherapy and biofeedback training may be effective for some people. Behavioral therapy is focused on identifying and reducing or eliminating triggers and reducing negative self-talk. Hypnotherapy can give some control over the muscle activity of the GI tract and the gut’s sensitivity to stress and other influences [2].

Regular physical activity helps relieve stress and assists in bowel function, particularly in people who experience constipation.  The therapist should encourage anyone with IBS to continue with their prescribed rehabilitation intervention program during symptomatic periods.

Therapists must be alert to the person with IBS who has developed breath-holding patterns or hyperventilation in response to stress.  Teaching proper breathing is important for all daily activities, especially during exercise and relaxation techniques.

It is also important for therapists—specifically in the field of Women’s Health—to be aware of the correlation between abuse and GI disorders. Therapists can provide these patients with information regarding various resources that victims of abuse may find helpful.

Therapists can also treat the various conditions associated with IBS, such as fibromyalgia, chronic fatigue syndrome, temporomandibular joint disorder, and chronic pelvic pain, in attempts to decrease symptoms of IBS. The treatment of these conditions can further relieve stress, an associated trigger for IBS symptoms [2].

Eliminating foods that trigger symptoms is one of the most effective treatments for IBS. Common suggestions made my doctors include eliminating:
• High-gas foods—foods such as carbonated beverages, cabbage, broccoli, cauliflower, and raw fruits can contribute to bothersome bloating or gas.
• Gluten—this is still a controversial topic, however, some research shows that diarrhoea can be reduced by eliminating gluten from the diet.
• FODMAPs—recent research on IBS has focused on FODMAPs (fermentable oligo-, di-, and monosaccharides and polyols) which are a type of carbohydrate that includes fructose, fructans, lactose, and others. FODMAPs are found in certain grains, vegetables, fruits, and dairy products and people with IBS can benefit from a low FODMAP diet, which may be a trigger for their symptoms. [3]

Herbal tea, such as chamomile (Chamaemelumnobile), can be surprisingly effective due to its relaxation and gentle antispasmodic properties. Peppermint (Mentha piperita) and fennel (Foeniculum vulgare) are both antispasmodics as well as anti-inflammatories. Herbalists often recommend combining these three herbs to make a single dose of tea to soothe painful spasms and expel excess wind. Several clinical trials, as well as animal studies, which have shown the potential benefits of peppermint oil in IBS; while further studies illustrate a clear understanding of its mode of action on the gut. However, human studies of peppermint leaf are limited and clinical trials on the actual tea are absent [1].

The presentation of colorectal carcinoma is related to the location of the neoplasm within the colon and the stage of cancer.  Early-stage signs and symptoms include rectal bleeding, haemorrhoids, abdominal/back/pelvic/sacral pain, back pain radiating down the legs and changes in bowel patterns.  Advanced stage signs and symptoms include constipation progressing to obstruction, diarrhoea with copious amounts of mucus, nausea, vomiting, abdominal distention, weight loss, fatigue, dyspnoea, and fever[1]."

Medscape Article: Cash BD. A 32-Year-Old Woman With IBS: Clinical Outcomes and the Use of Antibiotics. Medscape Education Gastroenterology 2011.