Anorexia nervosa is an eating disorder in which the individual exhibits severe weight loss without any indication of underlying systemic causes. Individuals with anorexia nervosa have a distorted view of their own body image and an extreme fear of gaining weight. [1][2][3][4][5]  Anorexia nervosa is diagnosed according to the DSM IV criteria listed below.

Two sub-types of anorexia nervosa have been recognized by the Diagnostic and Statistical Manual of Mental Disorders.  These sub-types include the restricting type and the binge-eating-purging type. Restricting subtype is characterized by an individual with anorexia nervosa who has not regularly taken part in bingeing or purging behaviors during the current episode.  Bingeing and purging behaviors include the use of laxatives, diuretics, enemas, and self-induced vomiting to restrict weight gain.  Binge-eating-purging subtype is characterized by an individual who has regularly taken part in binge-eating or purging behaviors in the current episode of anorexia nervosa.  [4][2]

When a closer look at individuals with anorexia nervosa is taken, a correlation can be seen between the number of diagnosed cases and athletes of specific sports.  Anorexia nervosa is more commonly seen in athletes who partake in sports that exist with the view point that a leaner appearance enhances performance.  Such sports include gymnastics, ballet, running, body building, and wrestling. [4]

Anorexia nervosa typically develops in adolescence around the onset of puberty.  This is believed to develop due to the increased deposition of fat that commonly coincides with puberty.  Adolescents are more likely to succumb to peer pressure and societal pressures to be thin at this age.  An increased awareness of body shape and size is also present at this age period.  Early recognition of anorexia nervosa is very important in order to prevent the devastating physical and emotional symptoms caused by starvation, malnutrition, and purging. [2][1]

The following characteristics can be present in individuals with anorexia nervosa, however not all signs and symptoms may be present at the same time in one individual.

The following physical symptoms may be present in individuals with anorexia nervosa:

Death is the most devastating co-morbidity present with this eating disorder and most commonly occurs due to symptoms of starvation or suicide.  Medical conditions typically causing death consist of abnormal heart rhythms and imbalances of electrolytes.  Mortality rates are as high as 5.9% in anorexia nervosa diagnoses.

For further information on these medications, visit the following website: www.drugs.com/

Listed below are common red flags Mayo Clinic suggests to screen for during the examination. [3] 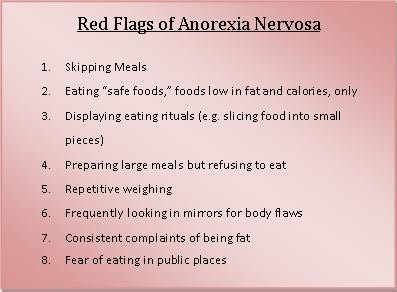 Individuals with anorexia nervosa may exhibit but are not limited to the systemic complications listed below:

Clients with anorexia nervosa can be treated in outpatient or inpatient facilities, however the approach is similar in both instances. Hospitalization may be required for individuals who are not medically stable.  A more restrictive approach may be more beneficial for individuals who continue to refuse to eat orally, decline in weight despite supplementation, electrolyte imbalance, heart arrythmias, or unresponsive to previous treatment. Indications for hospitalization suggested by the Cleveland Clinic are as follows:[4]

The main goals for treatment of anorexia nervosa include patient's recognition of eating disorder, identification of triggers, improvement of delusional thoughts and feelings towards body image and shape, achievement and maintenance of healthy weight, and preventing relapse.  A multi-focal approach is taken for the medical management of anorexia nervosa in order to combat all symptoms manifested within this disorder. Behavioral therapy, psychotherapy, family counselling, dietary and nutritional counseling, and exercise guidance are all recommended in combination to treat anorexia nervosa.  [5][1][2] Pharmacological treatment is another aspect that may be necessary in the treatment of the depressive symptoms found with anorexia nervosa (see medications listed above).

Cognitive behavioral therapy (CBT) is the most commonly used and effective psychotherapy to treat this eating disorder especially when initially supportive and directive.  For younger individuals with anorexia nervosa, family based therapy is recommended. However, family based therapy does not show positive results in individuals whose family shows high levels of expressed emotions.  Family based therapy focuses on resolving any internal conflicts, monitoring the patient's food intake, and preventing relapse.  These individuals, as well as individuals over 18 years old or with a longer duration of anorexia nervosa, benefit more from individual based psychotherapy. [2] Twelve-step programs can also be successful with this population in preventing relapse.

Nutritional therapy guidelines include weight gain of 2-3 lbs per week for inpatient treatment and 0.5-1 lb per week for outpatient treatment.  Initially daily caloric goals should reach 1000-1600 kcal in divided meals and bathroom use should be restricted for two hours following each meal.  Once a healthy weight is maintained stretching can be reintroduced followed by aerobic exercise with supervision and counselling on proper exercise guidelines. [4]

Physical Therapy is an integral part in rehabilitation of patients with anorexia nervosa once stretching and exercise is reintroduced.  A health care provider who has extensive knowledge of proper exercise guidelines and how to monitor physical signs of fatigue and vitals is needed to treat these patients.  These skills are important to help the patient learn to monitor levels of fatigue and heart rate in order to prevent them from over exercising or exercising to the point of exhaustion.  Patients with anorexia nervosa are also more susceptible to orthostatic hypotension, bradycardia, and muscle cramping due to malnutrition and low level caloric diets. A health care provider, such as a physical therapist, is the best trained professional to monitor and respond to these medical conditions.

A physical therapist can also be beneficial during the screening process because they are educated in their professional programs on how to recognize the signs and symptoms of this disorder. A therapist may be the first provider to notice signs and symptoms present with this disorder.  For example, during a cervical exam the therapist may note edema in the face or salivary glands or overuse injuries like stress fractures from excessively exercising.

When creating exercise programs for these individuals, physical therapists must take into account bone density levels, orthostatic hypotension, cardiac status, and lab values.  The program must be adjusted in order to protect the individual from physical harm or becoming medically unstable.  Exercise is not recommended if the patients body mass index is less than 18 kg/m2, and therefore is not introduced until the individual can maintain a healthy weight and is medically stable.   The ideal exercise program should include elements of stretching, light upper body weights, breathing exercises, and aerobic exercise.  It is very important for the physical therapist to set upper limits on repetitions, sets, or minutes in order to prevent the individual from over exercising.  Encouraging the individual to focus on the positive effects of exercise on overall health and not weight is equally important for the physical therapist. [5]