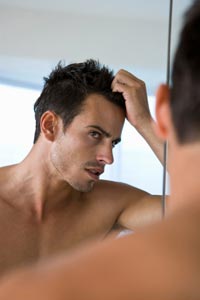 Body dysmorphic disorder (BDD) is a disorder characterized by extreme preoccupation with appearance that causes an individual personal distress in the presence of minimal or no physical defects. BDD is commonly considered to be an obsessive-compulsive spectrum disorder based on distinct similarities it shares with obsessive-compulsive disorder. Often, persons with BDD present first to dermatologists and/or plastic surgeons but necessitate referral to a psychiatrist or psychologist. Currently this disorder is classified as a somatoform disorder (a specific mental illness), but may also fall under the heading of an anxiety disorder. [1][2][3]


BDD is notable in that persons are concerned with a specific body part, rather than their entire body, which may help differentiate them from a person suffering from an eating disorder. [4]

BDD effects approximately 0.7% to 2.4% of general population. Specifically in the United States, 2.2% of men and 2.5% of women suffer from BDD.[6] Typically patients notice symptoms during adolescence, on average at the age of sixteen years. In spite of early onset of disease, most afflicted persons defer seeking treatment until their early thirties. BDD seems to affect men and women equally, however some studies report a slightly higher frequency in women.[1] Increased prevelance of BDD is seen in dermatological and cosmetic surgery practices.[3]

Most common bodily areas of preoccupation include:

People that suffer from BDD frequently have a preoccupation with 5-7 distinct body parts.[11] Men most commonly ascribe defects to their height, hair, body proportion, and genitals. Women are more likely to report concerns with their hips, thighs, buttocks, legs, breasts, and body weight. Obvious outward habits with people with BDD include compulsive behaviors such as:

In extreme cases of BDD, people may resort to:

Social manifestations of BDD may include:

BDD is commonly associated with other co-morbid conditions, such as:

Selective Serotonin Reuptake Inhibitors (SSRI) may help alleviate symptom severity and are the current medication of choice for treating BDD. Considering the proposed etiology by the neurobiological theory that Serotonin and Dopamine are abnormally metabolized, SSRI's help to maximize the effect of the body's own natural hormonal regulation. There is some evidence that SSRI's are more effective than non-SSRI's in terms of pharmacological treatment. Additionally, SSRI's are frequently used in treatment of many of the co-morbid conditions associated with BDD, including depression, social phobia, bulimia, hypochondriasis, and anxiety. In the United States, the most common brand names of SSRI's are Celexa, Lexapro, Prozac, Zoloft, Luvox, Paxil, and Anafranil. Though SSRI's have been well studied for the treatment of BDD, there are currently no FDA approved pharmacologic interventions for this disorder.[2][14]

SSRI's are often used in conjunction with non-pharmacologic therapy (e.g., Cognitive-Behavioral Therapy). Caution must be taken when discontinuing an SSRI abruptly due to the incidence of relapse.[14]

Other pharmacologic treatment options for BDD include anti-psychotics, benzodiazepines, lithium, serotonin-norepinephrine re-uptake inhibitors (SNRI), anti-epileptics, monoamine oxidase inhibitors (MAOI), and tricyclic antidepressants (TCA). These medications have only been studied in small trials, with TCA's and SNRI's demonstrating the greatest potential for therapeutic benefit.[3]

There are currently 3 diagnostic criteria for BDD:[16]

Diagnosis is made difficult because of the embarrassment that accompanies BDD, making a person with BDD reluctant to seek medical attention. More frequently plastic surgeons or dermatologists may suspect such a disorder based on frequent complaints and seeking surgical intervention. If a healthcare provider suspects BDD, then an immediate referral to a psychiatrist or psychologist is recommended.[1][4]

A multifactorial etiology is thought to be primary in the development in BDD. These factors include:[1][8]

Systemic manifestations of the disease are associated primarily with the comorbid conditions, as listed above. In particular, depression has been correlated with many systemic disorders and accompanying symptoms, including:[18]

Additionally, substance abuse may disrupt many organ systems, including:[18]

Eating disorders are known to have deleterious effects on entire body systems, and are unique to each specific case and disorder. 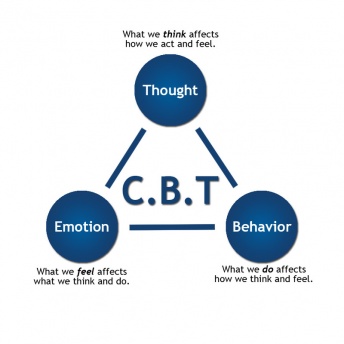 As outlined above, pharmacologic intervention is almost always utilized for the treatment of BDD despite limited studies proving its efficacy[3]. In addition to pharmacological treatment, psychological intervention indicated. Currently Cognitive-Behavioral Therapy (CBT) is considered the gold standard treatment of BDD.[8] CBT treatments may include elimination of excessive body checking, cognitive techniques to modify thoughts, intentional exposure to avoided situations, and coping mechanisms for their preoccupation. Ultimately the goal of CBT is to help the person to change the innacurate perception of their physical self and to place less emphasis on their physical appearance[1]. Metacognitive therapy, which seeks to modify how a person thinks, has recently been used with limited success in the treatment of BDD.[19]


In 2005, the United Kingdom created the National Institute for Health and Clinical Excellence (NICE) guidelines for treatment of BDD and OCD. These guidelines suggest a step-wise approach to treatment of these disorders. [20]

Persons with BDD are primarily treated by physicans and treatment of BDD specifically falls outside the scope of physical therapy practice. It is, however, crucial for physical therapists to be aware of BDD in patients as it relates to patient education, interpersonal interaction, personal wellness, and quality of life. Physical therapists are often the healthcare practitioner with whom patients feel most comfortable confiding in due to the nature of the profession and the personal time spent with the patients. Recognition of potential warning signs of BDD and appropriate referral is essential for physical therapy practice, particularly in direct access settings. The Brown Assessment of Beliefs Scale (BABS) is a reliable and valid psychometric outcome measure that physical therapists may utilize to quickly determine the degree of delusionality present in a patient suspected of having BDD.[22]


Physical activity has been proven to provide positive psychological benefits in addition to physical wellness and thus may be an appropriate adjunct therapy for persons undergoing traditional BDD therapy.[23] It has been shown that persons with body image disorders had improved subjective perception of their body image both immediately after exercise and longitudinally after completing an exercise regimen.[24]

Anxiety and Depression Association of America