Dopamine is a neurotransmitter associated with movement, attention, learning, and the brain’s pleasure and reward system[1]. Dopamine is essential for many of our daily behaviours, playing a role in how we move, what we eat, learn, and even whether we become addicted to drugs.

Two main brain areas produce dopamine. The substantia nigra and the ventral tegmental area. (see illustration), both located in the midbrain. The dopamine neurons are small in number (~0.0006% of the neurons in the human brain), and they are observed in all mammals and even “simple” animals such as turtles.[2] Dopamine produced relay signals travel throughout the brain. 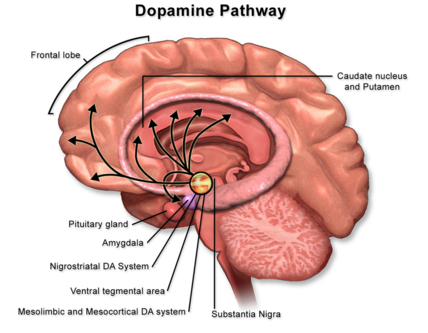 Having low levels of dopamine can make you less motivated and excited about things. It’s linked to some mental illnesses including depression, schizophrenia and psychosis.[3]

A deficiency of dopamine associated with cellular death in the substantia nigra results in Parkinson's disease. Dopamine-receptor agonists, which bind to dopamine receptors on dopamine-producing neurons in the neurotransmitter’s absence, can increase dopaminergic activity in the brain, helping to lessen Parkinson's symptoms[6].

The dopamine system can be activated by a wide range of pleasant experiences, such as eating, having sex, getting revenge, winning video games, listening to music, earning money and reading funny cartoons. The dopamine system also responds robustly to addictive drugs, eg opiates, alcohol and cocaine. These drugs can evoke stronger activation than natural rewards, and, unlike natural rewards, they do not cause satiety[2]. Having too much dopamine is linked to being more competitive, aggressive, and poor impulse control. It can lead to conditions that include ADHD, binge eating, addiction and gambling[3].

Drugs such as cocaine, nicotine and heroin cause huge boosts in dopamine. The “high” people feel when using drugs comes partly from that dopamine spike. And that prompts people to seek out those drugs repeatedly — even though they are harmful. Indeed, the brain “reward” associated with that high can lead to drug abuse and eventually to addiction.[4] 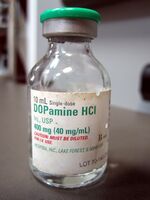 The blood-brain barrier prohibits the crossing of dopamine into the CNS from the systemic circulation, so it is ineffective for central neurological deficits such as Parkinson's disease. However, levodopa successfully crosses the blood-brain barrier and can be administered systemically, including oral pills[7]. 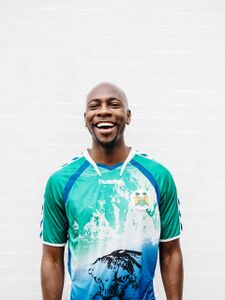 Activities that make you feel good will also raise dopamine. eg exercising, meditating, having a massage and getting enough sleep.

If low dopamine is causing depression or schizophrenia, medicines such as antidepressants or mood stabilisers may help

People with Parkinson’s disease are usually given medicines to boost their dopamine levels.[3]