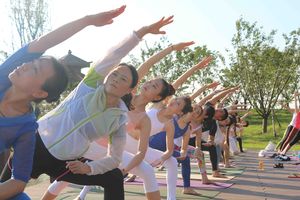 Yoga is defined as a Hindu spiritual and ascetic discipline, a part of which, includes breathing control, simple meditation, and the adoption of specific bodily postures. Yoga is widely practised for health and relaxation [1].

Yoga originated thousands of years ago in India as an integrated physical, mental, and spiritual practice based on ancient Vedic philosophy, and is connected to Ayurveda, the system of traditional Indian medicine[1]. During the 20th century, yoga became increasingly recognised outside India, and over the past decades it has continued to grow in popularity worldwide as a system for promoting health and well-being.

While modern yoga often focuses on physical poses and is sometimes thought of as a type of exercise, the practice usually incorporates one or more of the mental or spiritual elements that are traditionally part of yoga, such as relaxation, concentration, or meditation. For this reason, yoga is considered a mind-body exercise[2].

Physiological effects of yoga include decreased heart rate and blood pressure and physical effects include weight loss and increased muscle strength, A potential underlying mechanisms of these effects are proposed to include the stimulation of pressure receptors leading to enhanced vagal activity and reduced cortisol. The reduction in cortisol, in turn, may contribute to positive effects such as enhanced immune function and a lower prematurity rate.[3]

The field of yoga research has been growing in a number of areas such as chronic pain, autoimmune disease, cardiovascular disease and mental health [3]. Bibliometric reviews of published research studies reveal a three-fold increase in number of publications using yoga as a therapeutic intervention between 2003 to 2013, with more than 200 new yoga-related titles published each year since 2011. [5][6] Research suggests trauma-informed yoga program is beneficial and seeks to create a safer yoga practice for vulnerable individuals with a trauma history and may improve emotional and physical wellbeing in institutionalized and community settings.[7]

Research has looked into the benefits of yoga on:

As a growing area of research, studies in the yoga literature have commonly been criticised due to various limitations, such as lack of randomization, and standardisation of baseline characteristics, self-selection of samples, significant variability in the samples across studies including sample selection and sample size variables and lack of good physical activity/attention control or comparison groups[3].

Evidence suggests that yoga is a safe, effective, holistic and complementary approach for the treatment of chronic low back pain (LBP) in reducing pain and disability [57] [58][59][60][61]. For this reason, yoga has recently been included as a non-pharmacological adjunct in clinical guidelines for LBP in the USA, UK and Canada. [62][63].

Several potential beneﬁts have been proposed in relation to the practice of yoga in persistent pain conditions, including changes in physiological, behavioural and psychological factors [64].

Potential mechanisms for these changes include improved:

Chronic nonspecific low back pain is a multidimensional condition due to the range of psychological and sociological factors that are linked to poor outcomes[67] such as depression, low self-efficacy, pain catastrophizing and fear avoidance[68][69]. As the benefits from yoga also include mood enhancement and stress reduction, it has been proposed that Yoga as a mind-body therapy could address the physical and psychological aspects of chronic nonspecific low back pain.[70] [71][72]

Upon reviewing the current body of research, a 2017 Cochrane review of 12 trials with 1080 participants concluded with moderate-certainty of evidence that participation in yoga led to better outcomes at six months compared to no exercise, however, evidence was limited for effectiveness compared to other back specific exercise. The Cochrane review and a meta-analysis by Beggs et al. commented on low quality of evidence due to methodological concerns [73].

Krishna et al in their RCT study has found that yoga therapy in addition to standard medical therapy:

Wolf et al in a controlled study has found that a short yoga program for the patients diagnosed with hypertension to practice at home seems to have an antihypertensive effect, as well as a positive effect on self-rated quality of life compared to controls. This implies that simple yoga exercises may be useful as a supplementary blood pressure therapy in addition to medical treatment when prescribed by primary care physicians[31].

Results from a systematic review conducted by Sadja and Mills revealed that yoga interventions may be beneficial for reducing cancer-related fatigue in women with breast cancer [42].

Sharma et al in their systematic review has also found positive evidence of yoga as an alternative and complementary treatment [74]. In a recently published systematic review by Agarwal and Adi Maroko-Afek has been found that  yoga improved the physical and psychological symptoms, quality of life, and markers of immunity of the patients, providing a strong support for yoga's integration into conventional cancer care [75].

Posadzki and Parekh believe that both yoga and physiotherapy share underlying concepts, such as a holistic approach towards health and well-being of an individual.

Yoga can be beneficial to physiotherapeutic goals:

With regards to physiotherapeutic processes, yoga as a set of "static dynamic procedures" can be considered as a means to "self-mobilisation" of the nervous system and the joints, spine and limbs.[77]