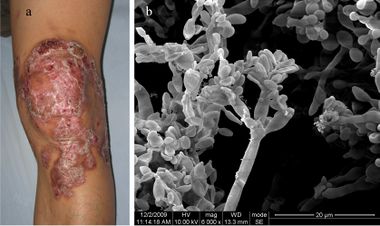 Fungi are unicellular or multi-cellular eukaryotic organisms that exist in all environments worldwide. From fungi visible to the naked eye, such as mushrooms, to microscopic yeasts and molds, they exist in a multitude of forms.

Fungal diseases kill more than 1.5 million and affect over a billion people. However, they are still a neglected topic by public health authorities even though most deaths from fungal diseases are avoidable. Serious fungal infections occur as a consequence of other health problems including asthma, AIDS, cancer, organ transplantation and corticosteroid therapies[1][2]. 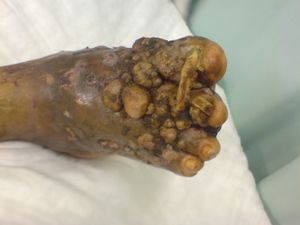 Image 1: A 34-year-old male with chromoblastomycosis, note a red plaque in the left knee. b. Under SEM observation: dematiaceous hyphae with many well-defined septa, conidiophores, and oval brown spores arranged in a clump could be seen. 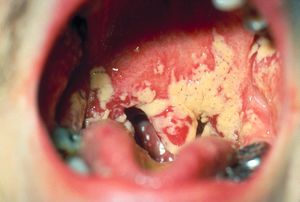 The impact of fungi on human health has been underappreciated, despite the fact that these eukaryotic pathogens infect billions of people worldwide, killing in excess of 1.5 million per year.

Fungal infections are determined by the fungal species and the immune status of the person infected. These invasive fungal diseases impose a major public health burden, with mortality rates of 30% to 90%, depending on the pathogen and patient population.[6]

Include (not limited to) the following: (Image 4 R: Patient’s arm shows the effects of the fungal disease sporotrichosis)