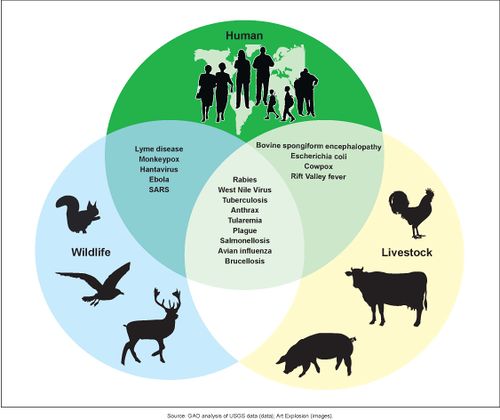 A zoonotic disease is any disease or infection that is transmissible from vertebrate animals to humans. [1],[2] Recently emerged zoonotic diseases include globally devastating diseases such as:

How do Zoonoses spread[edit | edit source]

Because of the close connection between people and animals, it’s important to be aware of the common ways people can get infected with germs that can cause zoonotic diseases. These can include:

These structures must be in place before an outbreak, epidemic, or pandemic occurs to have an effective, coordinated public- and animal-health response. Countries that lack a well-functioning coordination mechanism could fail to rapidly detect and effectively respond to emerging health threats, which could spread to other countries and threaten global health security.[4]

On a personal level

The best way to protect oneself from many of these zoonotic diseases is to practice good hygiene after handling animals or their waste. Washing hands thoroughly with hot, soapy water after any contact will help prevention contraction of zoonotic diseases.[2]   In addition screening newly received animals, conducting a routine sanitization of the contaminated environment, equipment, and caging, wearing gloves and protective clothing will help decrease the possiblity of contracting a zoonotic disease.[7]

The four principal means of preventing spread of zoonoses are[1]

On a world wide level

Including viruses, bacteria, parasites, and fungi.

2. Ehrlichiosis - Ehrlichiosis is the general name used to describe diseases caused by the bacteria Ehrlichia chaffeensis, E. ewingii, or E. muris eauclairensis in the United States. These bacteria are spread to people primarily through the bite of infected ticks including the lone star tick (Amblyomma americanum) and the blacklegged tick (Ixodes scapularis).

People with ehrlichiosis will often have fever, chills, headache, muscle aches, and sometimes upset stomach. Doxycycline is the treatment of choice for adults and children of all ages with ehrlichiosis.[9]

4. Rabies - Rabies is an infectious, zoonotic disease that destroys brain cells and can lead to death if left untreated before symptoms appear.  It is caused by a virus that lives in the saliva of a host or carrier and can be transmitted by being bitten by the carrier or if the infected saliva enters an open wound or mucous membranes.  Rabies has been reported as being transmitted to people after breathing in air from caves that contained millions of bats and through organ transplants from an infected person.  The most common sources of infections for humans are from wild animals and dogs.[10] 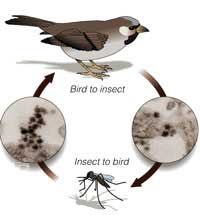 5. West Nile Virus - West Nile virus (WNV) is the leading cause of mosquito-borne disease in the continental United States.

6. Equine Encephalitis - A mosquito borne infection normally maintained in nature by a cycle from an arthropod vector to a vertebrate reservoir host.[1] 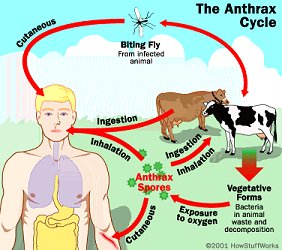 Anthrax is an acute infectious disease caused by the spore-forming bacterium Bacillus anthracis[13], a microbe that lives in the soil.[14]

Brucellosis is a bacterial infection that spreads from animals to people.

Plague is a zoonotic infection that has affected humans for thousands of years. In humans, the primary plague syndromes are bubonic, septicemic, and pneumonic. All of these result from infection with the gram-negative bacillus Yersinia pestis. The typical life-cycle of Y. Pestis starts within an insect vector followed by transmission to a mammalian host, typically rodents or other wild animals. Humans are only affected as incidental hosts. Despite this, Y. pestis is arguably one of the most important microbes in human history.  It has caused three documented pandemics, with the “black death” in 14th century Europe leading to the death of up to 30% of the population. The most recent pandemic began in the late 19th century in Asia and India, and it continues today in Africa. Outside of this, the bacterium remains endemic in the Americas and Asia and also exists as a potential bioterrorism threat, spurring ongoing vaccine development

Methicillin-Resistant Staphylococcus Aureus (MRSA) is defined as a type of bacterial staph infection that is non-responsive to antibiotics normally prescribed to treat such infections.[21]

10. Streptococcus suis is a zoonotic pathogen that infects pigs and can occasionally cause serious infections in humans.

Fungal infections associated with zoonotic transmission are an important public health problem worldwide . A number of these infections are among the group of the most common fungal diseases, such as: dermatophytosis, sporotrichosis , and histoplasmosis.[24]

1.Dermatomycoses - infections of the skin, hair and nails, which are caused in most cases by dermatophytes, and in rarer cases by yeasts and moulds.

Fungal infections of the skin are the most frequently occurring infectious diseases, with a worldwide prevalence of 20% to 25% and high and growing relapse rates. 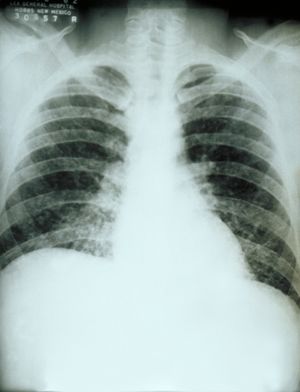 2. Histoplasmosis is a fungal disease associated with bat guano (stool).[15] and is a type of lung infection.

3. Coccidioidomycosis ( is an infection usually caused by inhaling the spores (“seeds”) of either Coccidioides immitis or Coccidioides posadasii fungi).

A parasitic disease associated with cats, dogs and their environment.[15]

2. Hookworm: Ancylostoma caninum is a parasitic disease associated with dogs and their environment.[15] 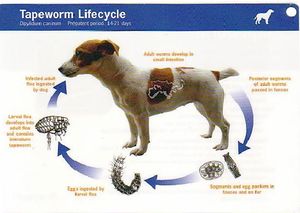 Tapeworms are flat, segmented worms that live in the intestines of some animals. Animals can become infected with these parasites when grazing in pastures or drinking contaminated water.

Eating undercooked meat from infected animals is the main cause of tapeworm infection in people. Although tapeworms in humans usually cause few symptoms and are easily treated, they can sometimes cause serious, life-threatening problems[30]