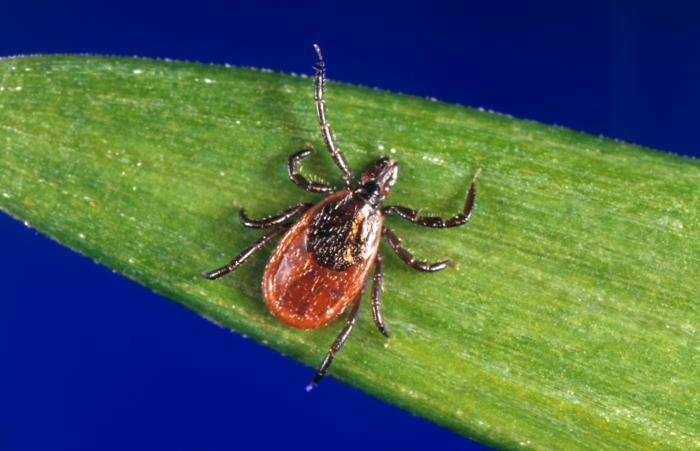 Blacklegged/Deer Tick. Image from the Hardin Library for the Health Sciences, University of Iowa. Available at http://www.lib.uiowa.edu/HARDIN/MD/cdc/1669.html

Lyme disease was initially identified in young children in Lyme, Connecticut in 1976. They first recognized the “bulls-eye” rash and an atypical type of arthritis in these children. In 1982 they recognized the relationship between the children with a history of tick bites and the infection when the Borrelia organism was found from an individual affected with Lyme disease. [2]

The Australian Government Department of health states[3] "the concept of chronic Lyme disease is disputed and not accepted by most conventional medical practitioners, not only in Australia but around the world". Australia recognises the existence of classical Lyme disease which is found in high rates in endemic areas (mainly the northeast of the USA, some areas of Europe including the UK and some parts of Asia). Australians can be infected in these endemic areas and bring the infection to Australia. Because there is no person-to-person transmission of classical Lyme disease, the risk to Australia and Australians is low. 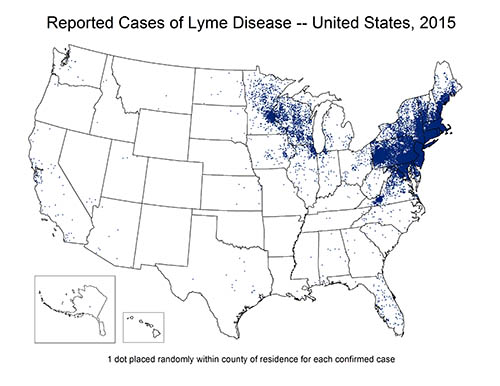 Reported cases of Lyme Disease in the U.S. in 2015. Image from CDC, available at http://www.cdc.gov/lyme/.

Like syphilis, Lyme is classified into 3 stages: localized, disseminated and persistent. The first two stages are part of early infection and the third stage is part of persistent or chronic disease. Stage 3 usually occurs within 12 months of the infection.[1]

Localized Lyme disease is characterized by erythema migrans occurring 1 to 2 weeks after tick exposure in an endemic area. The differential diagnosis for early Lyme disease with erythema migrans includes other skin conditions such as tinea and nummular eczema. If not treated in the localized stage, patients may go on to develop early disseminated or late disease manifestations. Early neurologic Lyme disease manifestations include facial nerve (CN-VII) palsy, lymphocytic meningitis, or radiculopathy. Cardiac involvement includes myopericarditis and typically presents with heart block. Lyme arthritis is mono- or pauciarticular, generally involving large joints, most commonly the knee, and occurring months removed from the initial tick bite.

Stage 2: Usually develops 3-12 weeks after the initial infection and may last 12-20 weeks, but recurrence is rare. Features may include

Borrelia lymphocytoma is a rare presentation of early Lyme disease that has been reported in Europe. It presents as a nodular red-bluish swelling that usually occurs on the ear lobe or areola of the nipple. The lesions can be painful to touch.

Stage 3: Late Lyme disease may occur many months or years after the initial infection. Features include

Babesia microti is a parasite that enters the bloodstream along with Borrelia at the time of the tick bite and attacks and destroys the host’s red blood cells. It can be potentially life-threatening, especially in individuals who are elderly, immuno-compromised, do not have a spleen, or have other diseases involving the kidney or liver. If not treated, complications can include hemodynamic instability, anemia, thrombocytopenia, organ failure, or death.[6]

Similar studies have found temporal links between Borrelia infection and the development of clinically diagnosable Fibromyalgia, the etiology of which is generally multifactorial and can be triggered by environmental factors, trauma, stress, infection, and possibly vaccination.[8]

Cardiac problems arising as a result of Lyme disease may occur in 4 to 10% of affected individuals. Potential problems include <a href="http://www.nlm.nih.gov/medlineplus/ency/article/000149.htm">myocarditis</a>, heart conduction block, and arrhythmia. Symptoms of cardiac involvement include bradycardia, tachycardia, irregular heartbeat, dizziness, syncope, and shortness of air.[9]

Neurological and mental health co-morbidities develop in approximately 5% of Lyme disease patients, especially if the disease is not successfully treated initially.[9]  Neurological sequelae include radiculopathy and paresthesias in the extremities. Associated mental health changes include mild cognitive impairments, mood disorders, depression, and anxiety. [10]

Although controversy exists over whether or not autism is truly a co-morbidity of Lyme disease, recent research shows a correlation between the two. Chronic infectious diseases including the Borrelia organism that causes Lyme have been associated with other co-infections that may weaken the fetal or infant immune system, putting affected individuals at increased risk for developing autism spectrum disorders.[11]

Acute cases of Lyme disease are initially treated with a 14 to 21-day course of oral antibiotics such as doxycycline, amoxicillin, or cefuroxime which are all safe and highly effective for the early stages of Lyme disease. A single 200-mg dose of doxycycline reduces the risk of Lyme disease in individuals bitten by ticks; however, these are not to be taken routinely (There's a low risk of transmission from a tick bite even in areas where the disease is most prevalent) and is contraindicated for pregnant women and children younger than 8 years of age.[12] If an affected individual presents with neurological impairments or a third-degree heart block, IV antibiotics such as ceftriaxone are administered for 14 to 28 days. Lyme-related joint and muscle pain (Lyme arthritis) is also generally treated with oral antibiotics. If Lyme arthritis persists after the first course of antibiotics, an additional four-week course of oral antibiotics is recommended. . There is no evidence that patients treated for Lyme disease with persistent, nonspecific symptoms (e.g., arthralgia and fatigue) have persistent infection; the risks of prolonged treatment is substantial, and far outweighs the benefits if any. [12] Arthritic symptoms that persist beyond both courses of antibiotic treatment are generally treated with antirheumatic and nonsteroidal anti-inflammatory (NSAID) medications.[9] Immunology is not developed with the exposure to Lyme disease, meaning that patients can be re-infected after the previous infection. It is important to note that Lyme disease is rarely fatal, but can have an impact on the cardiovascular system that could potentially cause life-threatening cardiac arrhythmias. [2]

Lyme disease is diagnosed based on symptoms, physical findings (such as a characteristic rash called erythema migrans), and the possibility of exposure to infected ticks. Laboratory testing is helpful in the later stages of disease.

Diagnosis of any infectious disease requires a combination of clinical experience and assessment by the doctor and understanding of the lab tests and their limitations. Laboratory tests are rarely definitive and all tests have a proportion of results which are false-positive (test indicates disease in someone without the disease) and false negative (test indicates that there is no disease in someone with the disease). When tests are done in places where the disease is rare or absent (for example, Lyme disease in Australia), many positive tests will be falsely positive.

The tests to diagnose Lyme disease are technically complex and require specialist expertise. It is important for people who want to be tested to make sure the laboratory that performs the test is reliable.

Lyme disease is most commonly diagnosed by a screening test called ELISA and this is then confirmed using a western blot test. Both of these tests detect antibodies that are produced by the immune system of someone with Lyme disease.

Lyme disease can also be diagnosed by testing a sample of the skin lesion by nucleic acid testing (eg PCR) or culture.[13]

Lyme disease is caused by spirochete microorganisms in the family Borrelia (in the United States, the specific species involved is Borrelia burgdorferi) which are transmitted primarily by black-legged or deer ticks. Deer ticks generally feed on the blood of deer, small birds, and mice, but are opportunistic and will also feed on the blood of other hosts such as cats, dogs, horses, and humans. Infected deer ticks transmit the bacteria to their host during the process of feeding.

Risks for being bitten by a tick capable of transmitting Borrelia bacteria include spending time outdoors in wooded or grassy areas especially in the Northeast and Midwest (see Prevalence section above). Walking in wooded or grassy areas in shorts and/or short sleeves increases the risk because of the higher surface area of exposed skin. The risk of acquiring an infection also increases if a tick is allowed to remain attached to the body for more than 48 hours, allowing it to take in a full “blood meal.” If a tick is identified and removed prior to that time, the risk of infection is low.[14]

Lyme disease, especially if left untreated, may involve multiple systems as detailed in the Characteristics/Clinical Presentation section above.  If the infection is allowed to progress from a localized one at the site of the tick bite to a systemic one, it may affect the central nervous, cardiac, and musculoskeletal systems. 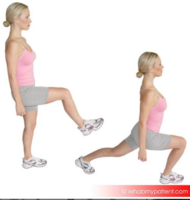 In addition, many patients with specific neurological complications such as Facial Palsy may also be referred for physical therapy.  Electrical stimulation of paralyzed or weak facial muscles following Lyme-related neurological insult is considered a fairly common practice, though the research does not fully support its use.  There are few randomized controlled trials investigating its effectiveness and those that do exist indicate that it may be neither harmful nor beneficial with many therapists taking a conservative approach and waiting several months between symptom onset and initiation of an e-stim program to allow natural neurological recovery to occur. [16] Neuromuscular retraining has been demonstrated to be beneficial in facial palsy[17], as has EMG biofeedback[18].

Physical Therapists should be aware of the signs of Lyme Arthritis which typically manifests approximately four months after Erythema Migrans.  It is most common in the knee but can be found in multiple joints.[19] Below is a short video about Lyme Disease and physical therapy management:

Other problems include the following:

The prognosis for patients who are treated for Lyme disease is excellent with no residual deficits.