“Ebola virus disease (EVD) is a severe, often fatal, zoonotic infection caused by a virus of the Filoviridae family (genus Ebolavirus)”[1]. EVD is one type of hemorrhagic fever that is commonly found in west, central, and east Africa. The disease is caused by a single-stranded RNA Flavovirus which tends to replicate on dendritic cells, macrophages, and monocytes. The virus then uses multiple mechanisms to invade its host including migration to the spleen, liver, and lymph nodes which leads to widespread infection.[1] There are five known strains of EVD: Ebola virus (formerly known as Zaire Ebola virus), Bundibugyo virus, Sudan virus, Taï Forest virus, and Reston virus. Of the five strains, only the Reston virus has not affected humans. The other strains have fatality rates ranging from 30-90% depending on the specific outbreak.[2]

EVD originates in animals and is spread to humans through hunting and eating of bushmeat or contact with bat feces. Once a human has EVD, the virus is spread through contact with bodily fluids or reuse of needles that have not been properly decontaminated.[1] “Classification by the Centers for Disease Control as a category A agent also designates EBOV as a bioterrorism threat, making this virus a biodefense research priority”[3].

The Ebola virus has been through 25 outbreaks since the first cases were discovered in humans in 1976[4]. The epidemics have centered mainly in west African countries with some occurring in the eastern and central areas as well. There have been more than 26,000 high-fatality cases of the virus documented in western Africa[5]. “The West African outbreak of Ebola virus disease (EVD) has been described as one of the most devastating health crises of the 21st century. It has resulted in over 11,000 deaths”[6]. The three largest outbreaks have occurred in Sierra Leone, Guinea, and Liberia[5][7]. The statistics available from each outbreak are variable and likely underrepresenting the disease prevalence due to a lack of healthcare reporting. Also contributing to this problem are a lack of education, recovery from civil war, a failing economy, mobile populations leading to urban overcrowding or movement to isolated, rural communities, and a lack of transportation to healthcare facilities.[6] 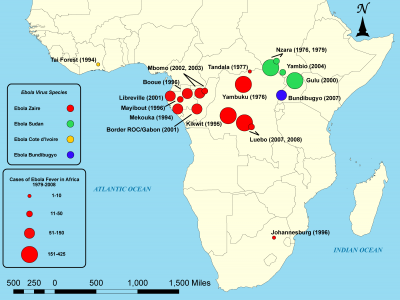 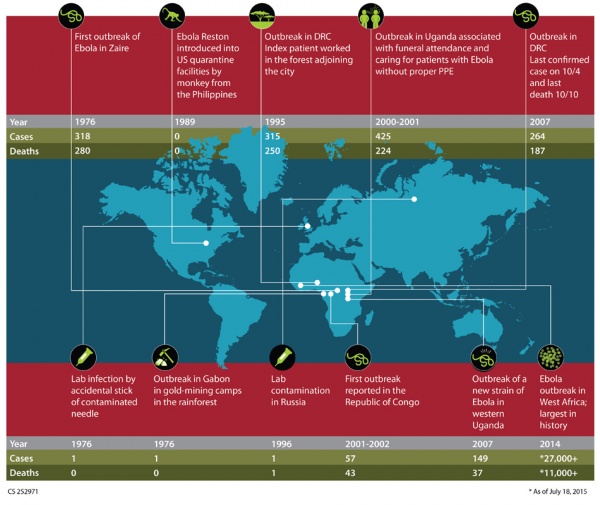 The Ebola virus is characterized by the following signs and symptoms:

Other symptoms of EVD, although rare, include encephalopathy, hepatomegaly, lymphadenopathy, and seizures.[1][2][4][8] 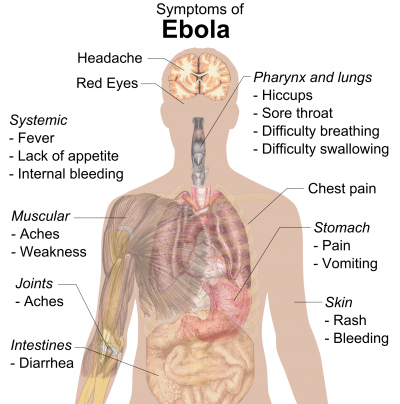 1. Antibiotics for the prevention and treatment of bacterial infections:[4][5]

6. Supportive care and analgesics for treatment of general symptoms:[1][4][5]

The following are experimental drugs and treatments that researchers are currently testing for the therapeutic benefits towards Ebola:

The diagnostic gold standard for the confirmation of Ebola is reverse transcription polymerase chain reaction (RT-PCR)[4]. It is able to detect the virus in patients in the early and late stages of the disease. Another useful diagnostic test that has a high specificity but is not universally available is the antigen capture enzyme linked immunosorbent assay (ELISA)[1]. Laboratory tests that have been used for the molecular detection of Ebola in conjunction with RT-PCR are the QIAGEN QIAamp Viral RNA Mini Kit and the MagMAX Pathogen RNA/DNA Kit (Life Technologies). Both of these methods are used to purify RNA from whole blood specimens. Assays for Ebola virus-specific antibodies (IgM and IgG) can also be performed to indicate the presence or absence of the disease.[5]

Ebola virus disease (EVD) is seen primarily in Africa and originates in certain species of bats along with primates such as gorillas and apes. Both hosts are known “reservoirs” of EVD and can be affected by the illness. Transmission to humans occurs through two ways: hunting and eating bush meat or eating food contaminated by bat feces. Once a human has been infected, EVD can be spread through contact of body fluids (blood, sweat, vomit, diarrhea, saliva, feces, urine, genital secretions, and breast milk). Even after the disease has run its course, due to viral shedding there is still risk of transmission through contact with semen, breast milk, saliva, stool, tears, and possibly urine. Other mechanisms of transmission include reuse of improperly sterilized needles and lack of clean water for handwashing.[1]

While this is the scientific explanation for the Ebola Virus there are myths that have surrounded this illness and led to distrust among people in Africa. The first myth is that a plane full of witches crashed and led to the first outbreak. The second myth is that a snake was released from a covered box by an unknowing husband, and the snake went on a killing spree.[6] Therefore, there is a stigma surrounding this disease.

The Ebola virus has the ability to affect most systems throughout the body including, but certainly not limited to: [1][4][11]

Medical management is a carefully guarded process of isolation, symptom management, and experimental medications and treatments. The incubation period for Ebola is up to 21 days, during which time a patient may be asymptomatic. There are three phases of Ebola characterized by different symptoms. The first phase typically has less prominent symptoms and may include headache, myalgia, and fever >37.5℃. The second phase includes various gastrointestinal symptoms such as nausea, vomiting, diarrhea, and dehydration. The final phase is either recovery or deterioration including neurological changes, collapse, and internal or external bleeding leading to death.[1]

Once a patient is suspected of having Ebola, he/she is placed in medical isolation in order to prevent the spread of the virus. The patient then undergoes testing in order to determine if Ebola is present (see Diagnostic Tests for further details). At the same time, anyone the patient came into contact with in the last 21 days is tracked down and required to perform temperature reading BID in order to detect the presence of a fever, which could indicate that the virus has spread. Typically the virus does not spread until symptoms occur but with a lack of access to medical facilities and early symptoms that are not significant, EVD may not be caught until symptoms have occurred for several days.[1] “The most common symptoms reported between symptom onset and case detection in the 2014 outbreak were fever (87.1%), fatigue (76.4%), loss of appetite (64.5%), vomiting (67.6%), diarrhoea (65.6%), headache (53.4%), abdominal pain (44.3%), and unexplained bleeding (18%)”[1].

After the patient is in isolation, a full medical screening is performed in order to rule out other illnesses and confirm the presence of the Ebola virus. The screening includes, but is not limited to, temperature, blood pressure, pulse, respiratory rate, and a physical examination. After the patient is diagnosed, symptom management begins. Fluid and electrolyte replacement is begun in order to counteract dehydration caused by vomiting and diarrhea. Medications such as paracetamol and opioid pain reliever are given in order to counteract the initial side effects of fever and myalgia. Antiemetics are given either orally or intravenously in an effort to reduce the amount of vomiting. In addition to these, other medications may be given as the virus progresses depending on what symptoms the patient develops. Currently there are no vaccines proven to prevent Ebola, but there are two vaccines in the testing phase which may be accessible to the public in the future. There are several emerging treatments that have been developed in order to fight the Ebola virus. Most were created during the most recent outbreak of Ebola. As it was an emergency situation, many of the treatments have not been tested in order to determine if they are useful or if there are any long term side effects.[1] (For more information, see Diagnositc Tests and Medications)

A very important aspect of physical therapy management in relation to Ebola is the ability to recognize signs and symptoms of the disease early and refer the patient to a physician for treatment[1]. A crucial part of this is taking an in-depth patient history, paying particular attention to information pertaining to recent travel to areas where Ebola is prevalent or if the patient has been in contact with individuals who have been diagnosed with Ebola. Another factor that contributes to early recognition is to be aware of the possible signs and symptoms of the virus (especially since these can be vague and nonspecific in the early stages of the disease) and to perform a thorough examination of the patient[1]. It may also be necessary for physical therapists to educate patients who plan on traveling to regions in Africa where Ebola is present about information concerning risk of exposure and prevention. The best resource for individuals to obtain this information is the Centers for Disease Control and Prevention website: www.cdc.gov/vhf/ebola/

Another way in which physical therapy management could be relevant to cases of Ebola is in regards to treating patients who have survived the virus and are in recovery. Post-Ebola syndrome is present in almost all survivors of the disease who report symptoms that remain or develop after their acute illness and after being discharged from the hospital.[4] 70% of patients experience musculoskeletal pain, consisting of myalgia and arthralgia, which become major health problems for these individuals[4][8]. Difficulty walking, pain felt in specific areas such as knees, thighs and back, and unspecified and generalized musculoskeletal and joint pain have been reported as problems experienced by these patients, which affect their functional ability. Currently, most musculoskeletal symptoms are treated with analgesics.[8] However, since physical therapists specialize in treating musculoskeletal conditions and restoring and improving the functional ability of individuals, it comes to reason that survivors of the Ebola virus suffering from post-Ebola syndrome would greatly benefit from physical therapy.

Ebola initially has many nonspecific symptoms, and once symptoms do begin to emerge, they may resemble many different diseases. Some of these symptoms include fever, fatigue, nausea, vomiting, abdominal pain, diarrhea, rash, headache, muscle pain, and generalized weakness. Diseases that present with symptoms similar to these that Ebola may be mistaken for are: 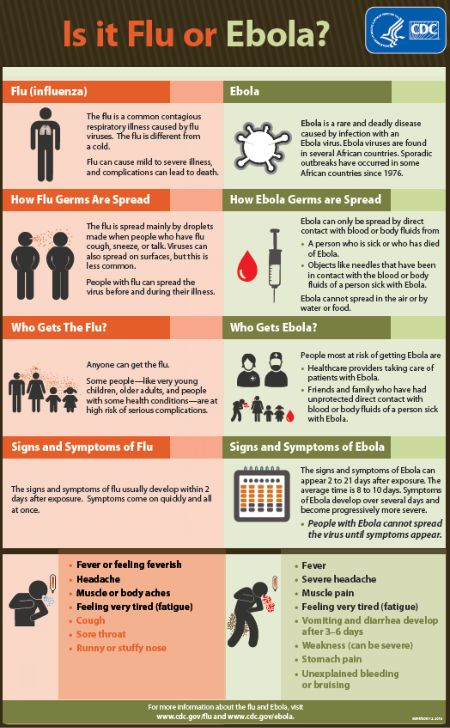