Atrial fibrillation is a common disease that affects many individuals. The prevalence of this disease increases with age with the most severe complication being acute CVA. Due to the irregularly of the atria, blood blow through this chamber becomes turbulent leading to a blood clot (thrombus). This thrombus is commonly found in the atrial appendage. The thrombus can dislodge and embolize to the brain and other parts of the body. It is important for the patient to seek medical care immediately if they are experiencing chest pain, palpitations, shortness of breath, severe sweating, or extreme dizziness.[1] 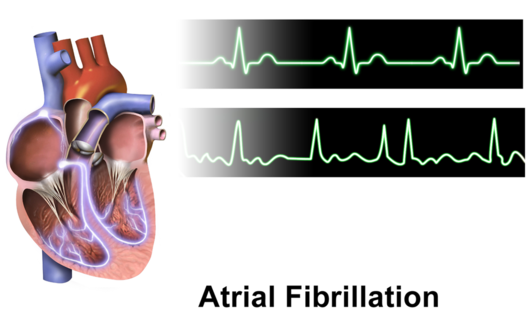 Atrial fibrillation (AF) is the most common type of heart arrhythmia. During atrial fibrilation the heart can beat too fast, too slow, or with an irregular rhythm.
AF occurs when rapid, disorganised electrical signals cause the heart's two upper chambers known as the atria to fibrillate.  The term "fibrillate" means that a muscle is not performing full contractions. Instead, the cardiac muscle in the atria is quivering at a rapid and irregular pace.  This ultimately leads to blood pooling in the atria as it is not completely pumped out of the atria into the two lower chambers known as the ventricles.[2]

Atrial Fibrillation is a common early postoperative complication of cardiac and thoracic surgery.

The 3 patterns of atrial fibrillation include:

AF may occur due to:

Atrial Fibrillation (AF) symptoms vary on the functional state of the heart, the location of the fibrillation, and may exist without symptoms.[2],6 Individuals are usually aware of the irregular heart action and may report feeling palpitations or sensations of fluttering, skipping and pounding. Other symptoms experienced can be inadequate blood flow which can cause feelings of dizziness, chest pain, fainting, dyspnea, pallor, fatigue, nervousness, and cyanosis. More than six palpitations occurring in a minute or prolonged repeated palpitations should be reported to the physician.[4]  Over time, palpitations may disappear as the arrhythmia becomes permanent; it may become asymptomatic. This is common in the elderly. Some patients experience symptoms only during paroxysmal AF, or only intermittently during sustained AF. An initial appearance of AF may be caused by an embolic complication or an exacerbation of heart failure. Most patients complain of palpitations, chest pain, dyspnea, fatigue, lightheadedness, or syncope. Further, frequent urination (Polyuria) may be associated with the release of atrial natriuretic peptide, particularly as episodes of AF begin or terminate.[3]

An irregular pulse should raise the suspicion of AF. Patients may present initially with a transient ischemic attack (TIA) or ischemic stroke. Most patients experience asymptomatic episodes of arrhythmias before being diagnosed. Patients with mitral valve disease and heart failure often have a higher incidence of AF. Intermittent episodes of AF may progress in duration and frequency.  Over time many patients may develop sustained AF. For a newly diagnosed patient of AF, reversible causes such as pulmonary embolism, hyperthyroidism, pericarditis and MI should be investigated.[5]

Meds such as anticoagulants (commonly used along side these medications due to AF causing stroke) can cause brain hemorrhage. Benefits must be closely monitored.[5]

High concentrations of CRP in the blood test, which confirm the presence of systemic inflammation are present in people with Atrial Fibrillation (AF).[3]

Changes in an individual's health such as a newly diagnosed complication may have a psychological impact. Patients may experience depression and other psycho-social challenges as a result of changes in their health status, treatment, frequent visits to the physician's office, and fear of the unknown that may accompany a diagnosis of atrial fibrillation.

There is limited research on the effect of traditional physical therapy and Atrial Fibrillation.
There is also conflicting information on the use of exercise to reduce the risk of AF.  Since obesity is an important risk factor, management of weight through exercise and education is a crucial, proactive measure that may reduce the incidence of AF. However, there is conflicting evidence in regard to the optimal prescription of exercise.