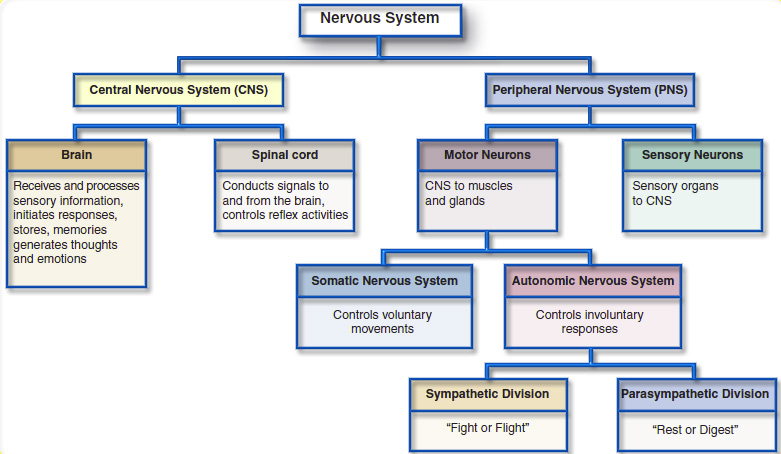 The spine or vertebral column bears the weight of the head, neck, trunk and upper extremities. The adult vertebral column typically consists of 33 vertebrae arranged in five regions, which provide support and protection for the spinal cord.  It consists of seven Cervical Vertebrae, twelve Thoracic Vertebrae, five Lumbar Vertebrae, five Sacral and four Coccygeal Vertebrae, The five sacral vertebrae are fused in adults to form the sacrum, and the four coccygeal vertebrae are fused to form the coccyx. Its uppermost vertebrae incorporating the atlas and axis articulate with the head, and the lowermost portion, the sacrum articulates with the pelvis. Each pair of adjacent vertebrae is separated by a semi-rigid intervertebral disk, which provides a level of flexibility to the vertebral column. Its flexibility is greatest in the cervical region and lowest in the thoracic region. [4]

The spinal cord in an adult is approximately a 45 cm long, cylindrical structure that is slightly flattened anteriorly and posteriorly. [2] The spinal cord lies within the vertebral canal, extending from the foramen magnum to the lowest border of the first lumbar vertebra. It is enlarged at two sites, the cervical and lumbar region. Its upper end is continuous with the medulla, the transition is defined to occur just above the level of exit of the first pair of cervical nerves. Its tapering lower end, the conus medullaris, terminates at the level of the L3 vertebra in neonates, and at the level of the L1-2 intervertebral disk in adults. The conus medullaris is continuous at its lower end with the threadlike filum terminale, composed mainly of glial and connective tissue, which, in turn, runs through the lumbar sac amidst the posterior and anterior roots of the spinal nerves, collectively called the Cauda Equina (“horse’s tail”), and then attaches to the dorsal surface of the coccyx. [4]

Sensory Nerve Fibres enter the Spinal Cord via the Posterior (Dorsal) Root. The cell bodies for these neurons are situated in the Dorsal Root Ganglia. Motor and Preganglionic Autonomic Fibres exit via the Anterior (Ventral) Root. 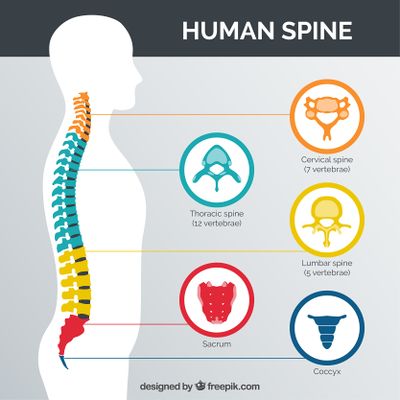 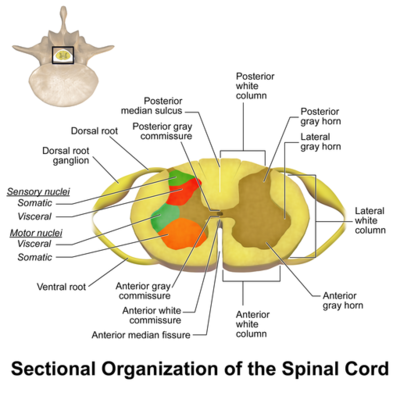 Emerging from the spinal cord are 31 pairs of anterior and posterior nerve roots. The cervical, thoracic, lumbar, and sacral portions of the spinal cord are defined according to the segmental division of the vertebral column and spinal nerves. There are eight cervical*, twelve thoracic, five lumbar, five sacral and one coccygeal. At each level an anterior pair of nerve roots carries motor nerves, while a posterior pair of nerve roots carries only sensory nerves. The anterior and posterior roots join to form two spinal nerves, one on either side of the spine, which then exit the vertebral canal through the intervertebral foramina. Once outside the intervertebral foramina they form peripheral nerves. [4]

The segmental arteries give off radicular branches, cervical and thoracolumbar, which enter the intervertebral foramen and supply the anterior and posterior roots and spinal ganglion of the corresponding level. The spinal cord itself is supplied by unpaired medullary arteries that originate from segmental arteries. [2][4]

Blood from within the spinal cord travels through the intramedullary veins, to the anterior and posterior spinal veins, which form a reticulated network in the pia mater around the circumference of the cord throughout its length. The anterior two-thirds of the gray matter drain via the anterior spinal vein, while the posterior and lateral spinal veins drain the rest of the spinal cord. These vessels empty by way of the radicular veins into the external and internal vertebral venous plexuses, groups of valveless veins that extend from the coccyx to the base of the skull. The vertebral and deep cervical veins drain venous blood from the cervical spine into the superior vena cava; the posterior intercostal and lumbar veins drain venous supply from the thoracic and lumbar spine into the azygos and hemiazygos veins; and the median and lateral sacral veins drain venous supply from the sacrum into the common iliac vein. [2][4]

Information detected by sensory receptors in the periphery is transmitted along ascending neural tracts in the spinal cord. Located in the white matter of the spinal cord, the ascending sensory tracts arise from either the the cells of the spinal ganglia or the intrinsic neurons within the grey matter that receive primary sensory input. There are many sensory tracts and pathways carrying different types of sensory information from the periphery to the cerebral cortex. In humans the major sensory pathways include:

The descending pathways, convey the motor commands and are involved in the control of movement. In humans, the major motor pathways include:

Carries information from the cerebral cortex to the spinal cord. Also called the pyramidal tract as it is the only point where all the fibres are collected together without contamination by other fibre tracts in the medullary pyramids of the brain stem. Primary motor cortex is the main source of input to this tract, but the premotor and supplementary motor cortex also contribute fibres. Its projections are primarily contralateral and have a strong influence on the activity of groups of spinal motoneurones, which innervate distal muscles of the hands and feet. Most of the fibers, approximately 85%, cross the midline in the decussation of the pyramids in the brain stem and then descend through the spinal cord in the lateral corticospinal tract, while the other 15% cross within the spinal cord at the level they terminate and are carried within the medial corticospinal tract. According to Harvey (2008), the cervical upper motor neurons are centrally located within the corticospinal tract while the lumbar and sacral neurons are peripherally located, which explains neurological patterns of loss seen with certain types of incomplete spinal cord injuries where the peripheral rim of the spinal cord is undamaged. [7]

This tract begins in the caudal reticular formation in the pons and medulla. The fibres from the medullary portion descend in the dorsolateral funiculus of the cord near the corticospinal fibres, whereas the fibres from the pontine region travel in the ventromedial portion of the spinal cord. These pathways are predominantly bilateral and have the largest density of projections to axial and proximal muscles. Provides both excitable and inhibitory effects on the interneurons in the spinal cord, and to a lesser extent, it also acts on the motor neurons. Its main action is to dampen down activity in the spinal cord. without this pathway, there is increased extensor tone observed. [7]

Originates from Deiters nucleus in the medulla and innervates the extensor and axial muscles. The vestibulospinal tracts receive limited input from the cortical motor areas as they arise in the vestibular nuclei, which receive main input from the balance organs of the ear. Their projections to the spinal cord are mostly bilateral and to proximal and axial muscles. It is involved in balance control and posture. [7]

Originates from the magnocellular part of the red nucleus in the brain. It projects towards common structures with the CoST, particularly those involved with distal motor control. There is debate as to how significant this tract is in humans, is quite prominent in the cat. [7]