Almost every muscle contains muscle spindles. These delicate sensory receptors inform the central nervous system (CNS) about changes in the length of individual muscles and the speed of stretching. With this information, the CNS computes the position and movement of our extremities in space, which is a requirement for motor control, for maintaining posture and for a stable gait. The responses of muscle spindles to changes in length also play an important role in regulating the contraction of muscles, by activating motor neurons via the stretch reflex to resist muscle stretch[1][2]. 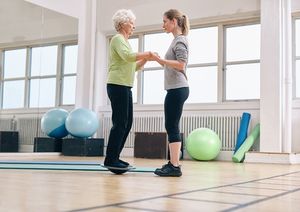 Although Golgi tendon organs, joint receptors and other sensory systems also contribute to proprioception, muscle spindles are the most important proprioceptors.

Two important proprioceptors that play a role in flexibility are the muscle spindle and the golgi tendon organ (GTO), together reflexively work to regulate muscle stiffness.

The function of the GTO can be considered opposite of the muscle spindle, which serves to produce muscle contraction. When a GTO is stimulated, it causes its associated muscle to relax by interrupting its contraction.[4] 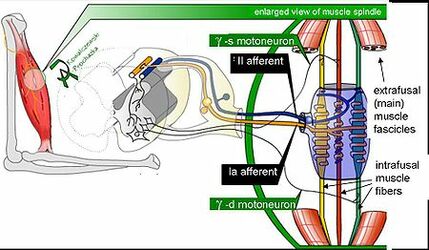 Muscle spindles are small sensory organs with an elongated shape, involved in proprioception.

Image 2: Mammalian muscle spindle showing typical position in a muscle (left), neuronal connections in spinal cord (middle) and expanded schematic (right). The spindle is a stretch receptor with its own motor supply consisting of several intrafusal muscle fibres. The sensory endings of a primary (group Ia) afferent and a secondary (group II) afferent coil around the non-contractile central portions of the intrafusal fibres. Gamma motor neurons activate the intrafusal muscle fibres, changing the resting firing rate and stretch-sensitivity of the afferents. 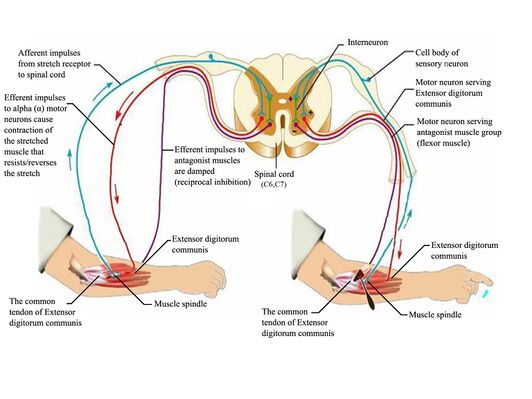 Imagine a muscle spindle as if it were a thread spiraled (or wrapped around) muscle fibers near the muscle belly; as the muscle lengthens or stretches, it pulls on the spindle causing it to lose its spiral shape and also stretch. This signals the muscle to contract (after which, the spiral regains its shape), in turn protecting the muscle from being overstretched. This process is called the stretch reflex.

When a muscle spindle’s associated muscle is rapidly stretched, the spindle can cause two things to happen:

Ultimately, the muscle spindle functions to alert the brain that nearby joints and soft tissues are in danger of being stretched too far. These are important concepts in understanding body awareness (also known as proprioception and kinesthetic awareness)[4].

Spindles thus indicate the degree to which the muscle must be activated in order to overcome a given resistance. As a load increases, the muscle is stretched to a greater extent, and engagement of muscle spindles results in greater activation of the muscle. Muscles that perform precise movements have many spindles per unit of mass to help ensure exact control of their contractile activity[5].

A simple example of muscle spindle activity is the knee jerk reflex (Patellar reflex), sudden kicking movement of the lower leg in response to a sharp tap on the patellar tendon, which lies just below the kneecap[5]. Tapping on the tendon of the knee extensor muscle group below the patella stretches the muscle spindle fibers. This causes activation of extrafusal muscle fibers in the same muscle. A knee jerk occurs as these fibers actively shorten. This, in turn, shortens the intrafusal fibers and causes their discharge to cease[5].

Problems may arise in the functioning of the muscle spindle. An upper motor neuron lesion can lead to a loss of supraspinal inhibition. A basal ganglia disorder can cause excessive supraspinal activation[7]. If there is a problem with the muscles spindle it may present as abnormal muscle tone such as spasticity (a velocity dependent increase in resistance to passive stretch which causes exaggerated tendon reflexes called hypereflexia)[8]. There are several causes of spasticity associated with the muscle spindle:

It is often believed that dysfunction caused by strokes and movement disorders, such as muscular dystrophy, also affect the function of muscle spindles. For example, strokes are known to cause weakness, loss of dexterity, and exaggerated reflex response to proprioceptive and cutaneous stimuli due to problems with the gamma motor system. However, current research shows that the gamma motor system is not responsible for the deficits of the skeletal-motor system. The discharge rate of muscle spindles in stroke patients was found to be similar to normal subjects. There was no difference in the reflex response to peripheral afferent inputs or in the response to supraspinal drive[11].

On the structural level, muscle spindles in aged humans possess fewer intrafusal fibers, an increased capsular thickness and some spindles which show signs of denervation. Together with the proprioceptive system in general and with ageing, significant structural and functional changes occur and the changes are consistent with a gradual decline in proprioceptive function in elderly individuals and animals. These changes might contribute to the frequent falls and motor control problems observed in older adults [3].