Note: This article is about skeletal myocytes. 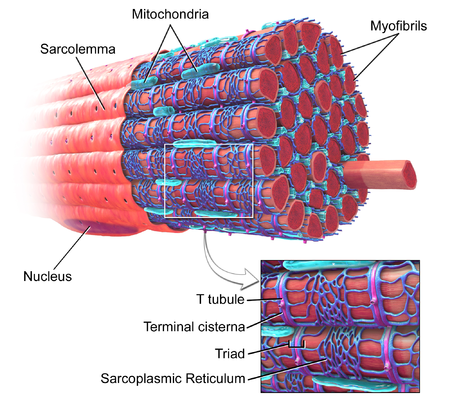 Myocytes, sometimes called muscle fibers, form the bulk of muscle tissue. They are bound together by perimysium, a sheath of connective tissue, into bundles called fascicles, which are in turn bundled together to form muscle tissue. Myocytes contain numerous specialized cellular structures which facilitate their contraction and therefore that of the muscle as a whole. 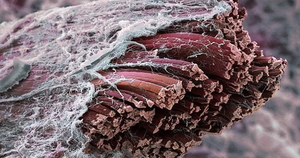 Myocytes can be incredibly large

The Sarcolemma of Myocytes

Most of the muscle cell is filled with myofibrils.[2]

Myofibrils are contractile units (within the muscle cell) that consist of an ordered arrangement of longitudinal myofilaments (thin actin filaments and thick myosin filaments).

The characteristic 'striations' of skeletal muscle readily observable by light microscopy are the thin filaments (light) the thick filaments (dark).

The Z-line defines the lateral boundary of each sarcomere.[3]

Shortening or contraction of skeletal muscle fibers is a result of sarcomere shortening.

These sarcomere structures give skeletal muscle its striated appearance and are readily visible on electron microscopy[5].

Image R:  The Actin-Tropomyosin-Troponin complex. In the resting state, tropomyosin, held in place by troponin, blocks the site on actin to which myosin binds. However, in the presence of Ca++, it binds to troponin, and when troponin binds Ca++ it changes conformation, moving tropomyosin away from the myosin binding site on actin. 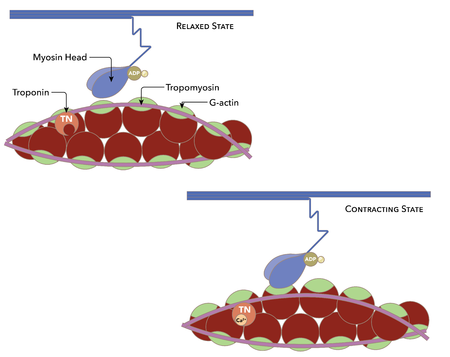 The sliding filament model describes the process used by muscles to contract. It is a cycle of repetitive events that causes actin and myosin myofilaments to slide over each other, contracting the sarcomere and generating tension in the muscle. 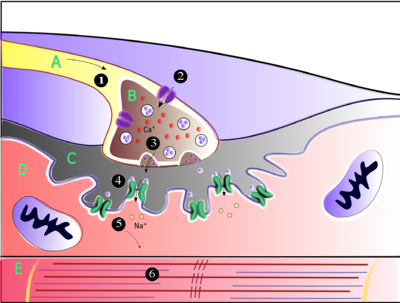 Muscles will contract or relax when they receive signals from the nervous system. The neuromuscular junction is the site of the signal exchange. The steps of this process in vertebrates occur as follows:

(1) The action potential reaches the axon terminal. (2) Voltage-dependent calcium gates open, allowing calcium to enter the axon terminal. (3) Neurotransmitter vesicles fuse with the presynaptic membrane and acetylcholine (ACh) is released into the synaptic cleft via exocytosis. (4) ACh binds to postsynaptic receptors on the sarcolemma. (5) This binding causes ion channels to open and allows sodium ions to flow across the membrane into the muscle cell. (6) The flow of sodium ions across the membrane into the muscle cell generates an action potential which travels to the myofibril and results in muscle contraction[6]. 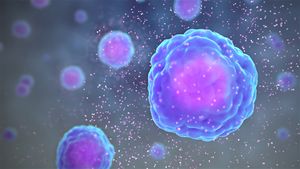 The secretome is the rich, complex set of molecules secreted from living cells.

Skeletal muscle is an active endocrine organ containing cells that may communicate in an auto-, para- or endocrine manner thanks to the secretion of mediators like myokines.

Myokines are defined as: cytokines and other peptides that are produced, expressed, and released by muscle fibers and exert either paracrine or endocrine effects”