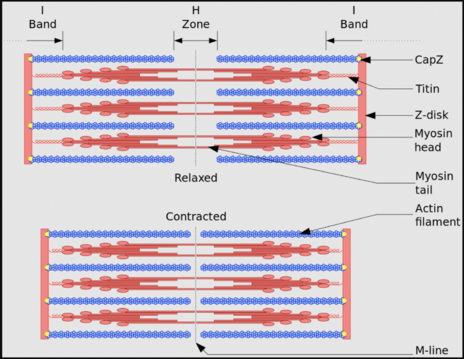 The sliding theory, proposed by scientists, who through the use of high-resolution microscopes visualised the actin and myosin filaments within a sarcomere. They could see length of the sarcomere when relaxed and its shortening as it contracted, and were able to give names to particular zones.

This video explains the structure of a Sarcomere-sarcomere bands and actin and myosin arrangement.

In essence, during contraction a sarcomere shortens like a collapsing telescope, as the actin filaments at each end of a central myosin filament slide toward the myosin's centre, as described below.

The movements of myosin appears like a molecular dance, with the myosin reaching forward to binds to the actin, contracting, then releasing actin, before it reaches forward again to bind actin in a new cycle. This is the so called myosin-actin cycling. As the myosin S1 segment binds and releases actin, it forms what are called cross bridges, which extend from the thick myosin filaments to the thin actin filaments. The contraction of myosin's S1 region is called the power stroke, which requires the hydrolysis of ATP, which breaks a high-energy phosphate bond to release energy, resulting in force generation and shortening of an individual sarcomere. Because sarcomeres are joined end to end throughout an entire muscle fiber, their simultaneous contraction shortens the entire muscle[4].[1]

The mitochondria that are present in large numbers in skeletal muscle produce the much needed ATP.

In sarcomeres, the contractile actin and myosin filaments are integrated in paracrystalline order by the action of accessory cytoskeleton proteins, forming what is often termed the sarcomeric cytoskeleton[5]. 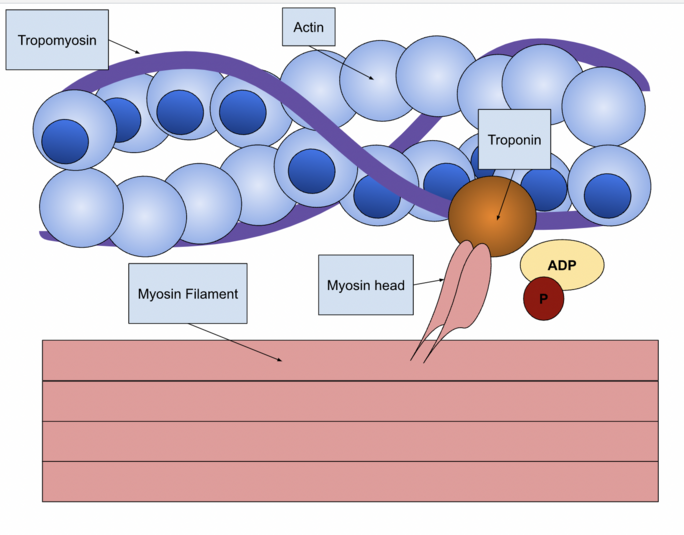 Myosin is one of three major classes of molecular motor proteins: myosin, dynein, and kinesin.

Actin is the most abundant protein in most eukaryotic cells and has a pivotal role in muscle contraction as well as in cell movements. It is the essential building block of the microfilament system.[6]