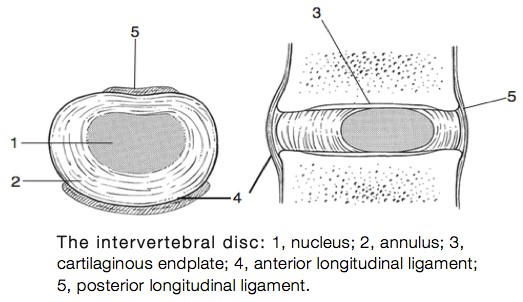 The intervertebral disc (IVD) is important in the normal functioning of the spine. It is a cushion of fibrocartilage and the principal joint between two vertebrae in the spinal column. There are 23 discs in the human spine: 6 in the cervical region (neck), 12 in the thoracic region (middle back), and 5 in the lumbar region (lower back).

IVDs allow the spine to be flexible without sacrificing a great deal of strength. They also provide a shock-absorbing effect within the spine and prevent the vertebrae from grinding together. They consist of three major components: the inner, nucleus pulposus (NP), the outer, annulus (AF) and the cartilaginous endplates that anchor the discs to adjacent vertebrae.[1] 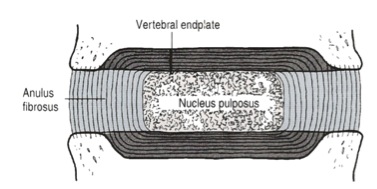 Figure 2: Detailed structure of the IVD (adapted from Bogduk 2005)

A gel-like structure that sits at the center of the intervertebral disc and accounts for much of the strength and flexibility of the spine. It is made of 66% to 86% water with the remainder consisting of primarily type II collagen (it may also contain type VI, IX, and XI) and proteoglycans. The proteoglycans include the larger aggrecan and versican that bind to hyaluronic acid, as well as several small leucine-rich proteoglycans. Aggrecan is largely responsible for retaining water within the NP. This structure also contains a low density of cells. While sparse, these cells produce the extracellular matrix (ECM) products (aggrecan, type II collagen, etc.) and maintain the integrity of the NP.[1]

Consists of “lamellae” or concentric layers of collagen fibres [2]. The fibre orientation of each layer of lamellae alternate and therefore allow effective resistance of multidirectional movements. The AF contains an inner and an outer portion. They differ primarily in their collagen composition. While both are primarily collagen, the outer annulus contains mostly type I collagen, while the inner has predominantly type II. The inner annulus also contains more proteoglycans than the inner.[1] NB collagen Type I: skin, tendon, vasculature, organs, bone (the main component of the organic part of bone) Type II: cartilage (the main collagenous component of cartilage and is more flexible)[3]

An upper and a lower cartilaginous endplate (each about 0.6– 1 mm thick) cover the superior and inferior aspects of the disc. The endplate permits diffusion and provides the main source of nutrition for the disc. The hyaline endplate is also the last part of the disc to wear through during severe disc degeneration.

The disc is innervated in the outer few millimetres of the annulus fibrosus [5].

Only the outer third of the AF is vascular and innervated in a non-pathologic state. In ageing and states of inflammation, both nerve growth and granulation tissue growth are stimulated. Additionally, the granulation tissue secretes inflammatory cytokines, which further increases sensitivity to pain sensations[1].

The IVD is largely avascular, with no major arterial branches to the disc [6]. The outer annular layers are supplied by small branches from metaphysical arteries. Only the outer annulus is vascularized. Blood vessels near the disc-bone junction of the vertebral body as well as those in the outer annulus supply the NP and inner annulus. Glucose, oxygen and other nutrients reach the avascular regions by diffusion. The same process removes metabolites.[1]

Weight bearing: The disc is subjected to various loads, including compressive, tensile and shear stresses [8] [9]. During compressive loading, hydrostatic pressure develops within the NP, which thereby disperses the forces towards the endplates as well as the AF [10] [11] [10]. This mechanism slows the rate applied loads are transmitted to the adjacent vertebra, giving the disc its shock-absorbing abilities [12].

Movement: The disc is also involved in permitting movements between vertebral bodies, which include:

Nuclear migration: Asymmetric compressive loading disc can cause the NP to migrate in a direction opposite to the compression [13] [12] [14] [15]. For example, during forward bending (or flexion) of the lumbar spine, the NP migrates posteriorly or backwards (Figure 4). Conversely, during backwards bending (or extension), the nucleus is squeezed anteriorly or forwards. This concept is known as the dynamic disc model [16]. Although NP migration has been shown to behave predictably in asymptomatic discs, a variable pattern of migration occurs in people with symptomatic and/or degenerative IVDs [16].

Figure 4: Direction of nuclear migration within the IVD during spinal movements (adapted from McKenzie 1981)

Disc thickness generally increases from rostral to caudal. The thickness of the discs relative to the size of the vertebral bodies is highest in the cervical and lumbar regions. This reflects the increased range of motion found in those regions.

NB: Significant research has been put into means of replacing/re-growing the intervertebral discs. The various methods include the replacement of discs with synthetic materials, stem cell therapy, and gene therapy.[1]

There is no intervertebral disc between C1 and C2, which is unique in the spine.