The sacrum is a large bone located at the terminal part of the vertebral canal, where it forms the posterior aspect of the pelvis. It is remarkably thick, which aids in supporting and transmitting the weight of the body.[1]

Surfaces of the Sacrum[edit | edit source]

The posterior aspect of the sacrum exhibits numerous bony landmarks.

The fusion of the vertebrae and the large size of the sacrum forms an ideal base that allows it to support the weight of the entire body.[2] 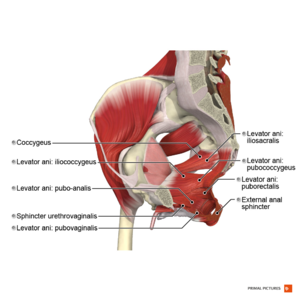