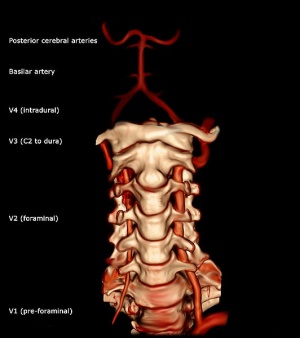 It ascends though the foramina of the transverse processes of the cervical vertebrae, usually starting at C6 but entering as high as C4[2]. It winds behind the superior articular process of the atlas. It enters the cranium through the foramen magnum where it unites with the opposite vertebral artery to form the basilar artery (at the lower border of the pons)[3].

The vertebral artery can be divided into four divisions:

It supplies 20% of blood to the brain (mainly hindbrain) along with the internal carotid artery (80%).

It lies close to the vertebral bodies and facet joints where it may be compressed by osteophyte formation or injury to the facet joint.

The vertebral and carotid artieries are stressed primarily by rotation, extension and traction, but other movements may also stretch the artery. As little as 20% of rotation and extension have been shown to significantly decrease vertebral artery blood flow[2].

The greatest stresses are placed on the verterbal arteries in 4 places:

The most common mechanism for non-penetrating injury to the vertebral artery is extension with or without side flexion or rotation[2].

Symptoms, which may be delayed include: