Knowing the theory of the anatomy and the physiology of the male pelvis is the first step in becoming clinically competent. -Pierre Roscher PT[1]

It is essential to have some sort of pelvis model when treating men’s health patients to aid in understanding and comfort with treatment concepts and interventions.[1] It is a powerful teaching aid. A 2018 study by Meyer et al.[2] found that the use of a virtual 3D pelvis model during the training of medical professions was effective and valid in learning needed anatomy. These findings suggest that a virtual 3D pelvis model, such as on a smart phone or computer app, could be used in the clinic as part of patient education when a physical model is not available.

Follow this link to PhysioSkills for a free printable model of the pelvic floor muscles.

The pelvis does not function alone. It is highly interconnected with the musculoskeletal features of the hips and the gluteal musculature. Together, these areas support the internal organs and core muscles. The physiology of the male pelvic floor involves pelvic organ support, bowel and bladder control and sexual functioning.[3] This article will focus on the male pelvis as associated with the pelvic floor. For more information on the greater pelvic girdle, please read here. 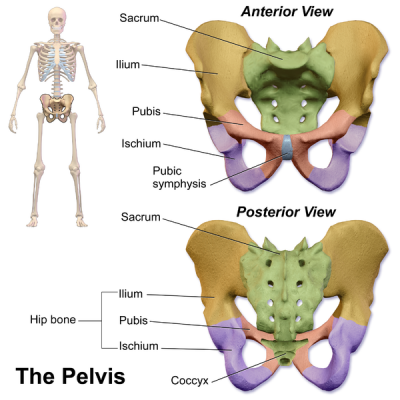 The human pelvis is a bony ring formed by two bilateral innominate bones, made from the ilium, ischium, and pubis, and the sacrum.  The innominates articulate with each other anteriorly at the pubic symphysis and posteriorly with the sacrum at the sacroiliac joints.  The coccyx extends from the distal sacrum and functions as an attachment to ligaments and tendons.[3] 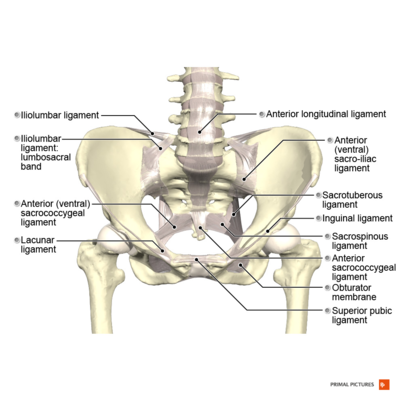 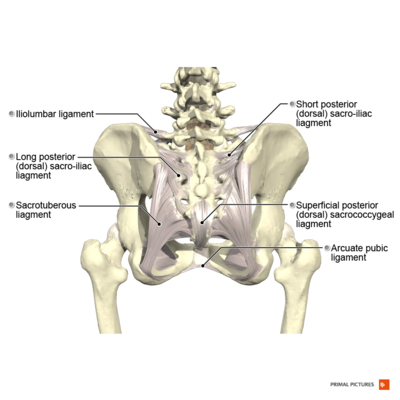 The male pelvic floor muscles make up a dome-shaped structure in the pelvis, similar to a hammock. The male pelvic floor is made up of three layers: deep, middle, and superficial, and has a complex relationship with the surrounding bony pelvis, fascia, ligaments and nerves.[3][5] 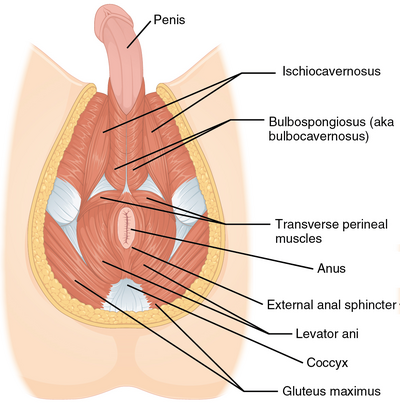 The middle layer is comprised of the perineal membrane, the deep transverse perineals, the sphincter urethrae and the compressor urethrae.[3] This layer is particularly responsible for urinary continence when there is increased intraabdominal pressure (eg coughing or sneezing).[6] 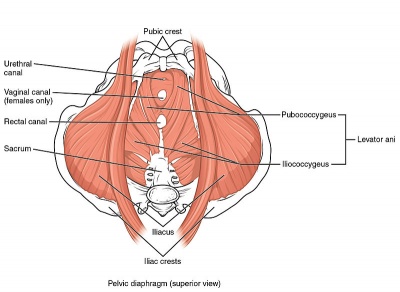 The muscles of the deep layer include: the levator ani, iliococcygeus, pubourethralis, and ischiococcygeus.[3] These muscles are particularly responsible for the support of pelvic organs and maintenance of continence. The deep layer is also known as the pelvic diaphragm.[6]

The levator ani is composed of three muscles: puborectalis, pubococcygeus, and iliococcygeus. The puborectalis forms a U-shaped sling around the rectum and, through a sphincter-like action on the anorectal junction, contributes to faecal continence.[3] Of clinical relevance for activities of daily living: sitting with a forward lean and legs supported in a squat-like position is the ideal positioning for defecation due to this anatomical sling.[7]

Not technically part of the pelvic floor, the piriformis is also present in the deep layer originating on the anterior sacrum. The piriformis can influence movement control around the pelvis: with a fixed sacrum, the piriformis laterally rotates an extended thigh, or abducts a flexed thigh. If the legs are fixed, it retroverts the pelvis.[3] It is a possible source of pelvic pain.[1]

The following short video shows a basic overview of the male pelvic floor muscles and a demonstration of their muscle contractions to control continence. 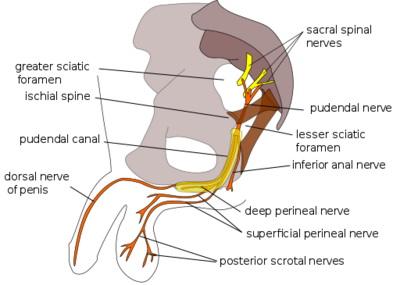 The pelvic floor has parasympathetic, sympathetic and somatic nerve supply. This means there is both voluntary and involuntary control of the area.[3][9]

Peter Dornan PT published a map of the pudendal nerve which outlines different dysfunctions of each of the three branches and how it influences pelvic pain. This can be very useful in differential diagnosis for pelvic pain.[1]

The Pelvic Pain Foundation of Australia shares information on pudendal neuralgia (PN) as well as a useful diagram adapted from Peter Dornan's work.

The urogenital system in males has a common passage for both the urinary and reproductive systems. The urinary system includes: the kidneys, ureters, bladder and urethra. This system is responsible for removing waste from the body in the form of urine. 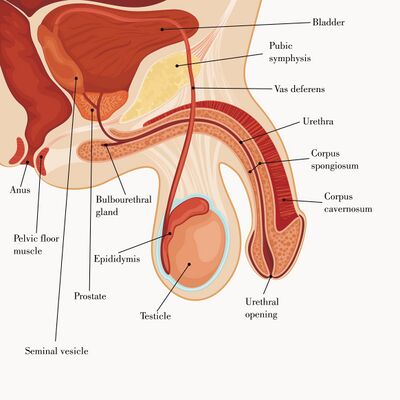 The bladder is a storage organ for urine. The average bladder capacity for an adult is 800-1000mL. The need for bladder voiding is controlled by a stretch reflex of the detrusor muscle which is located in the walls of the bladder.[1][10]

Normal continence is maintained when the closure pressure of the urethra is greater than the pressure from the bladder above it. It requires the complex interaction between the autonomic nervous system that controls the more proximal smooth muscles in the urethra (internal sphincters) as well as the somatic nervous system that controls the striated muscles surrounding the urethra (external sphincter).[10][11]

The average urethra is 15 to 17 cm long, measured from the base of the bladder to the exit of the penis. The urethra can be divided into three sections: prostatic, membranous, and penile urethra.[10] Urethral length dictates full penile length possibilities in many men.[1] 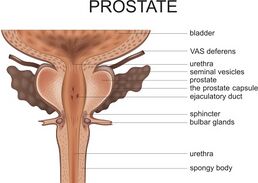 The prostate is a gland which produces seminal fluid. This fluid nourishes and transports sperm. The prostate is directly inferior to the bladder and anterior to the rectum.  It is surrounded by a capsule that contains the cavernous nerves, which play a direct role in erection production.[1] 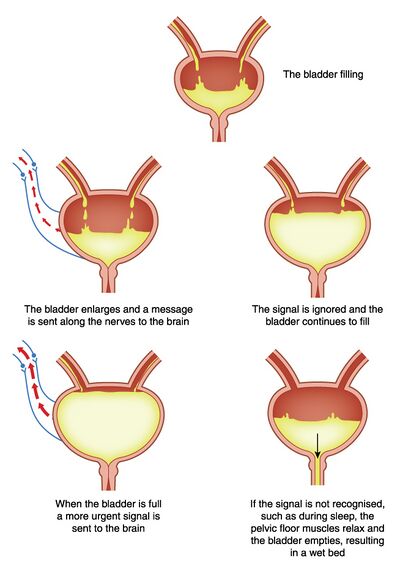 A sphincter is a cylindrical muscles that closes around a structure.  The two sphincters of the male pelvic floor which control urinary continence are made up of the pelvic floor muscles where they encircle the urethra as it travels through the prostate.[1]

Micturition occurs when the bladder detrusor contracts and the internal sphincter relaxes through involuntary autonomic nervous control. The muscles of the pelvic floor voluntarily relax to open the external sphincter and allow urine to flow out of the body. The coordination of these muscular actions for sphincter control is essential for urinary continence.[3] 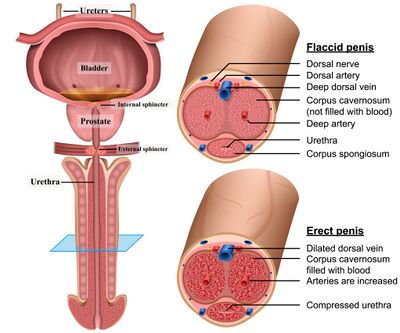 The penis is the external organ of the male reproductive system and has two functions:

The penis can be divided into three anatomical sections:

The penis itself is surrounded by connective tissue layers, some of which extend into the abdominal wall. The most superficial fascial layer is called Colles Fascia or the External Fascia of Colles. The deeper fascia is known as Buck’s Fascia or the Deeper Fascia of the Penis. This deep layer contains the corpora cavernosa and a corpus spongiosum of the penis.[12]

Normal sexual function is a coordinated effort of the pelvic floor muscles, genitalia, and autonomic nervous system. The male sexual response is controlled by the autonomic nervous system, with the parasympathetic division responsible for the excitement phase and the sympathetic division responsible for the orgasm phase. Penile erection is under parasympathetic control, allowing the smooth muscle of the corpus cavernosa to relax and fill with blood, while the perineal striated pelvic floor muscles contract to promote rigidity. Seminal emission is under sympathetic control. Ejaculation is primarily a spinal cord reflex.[3] 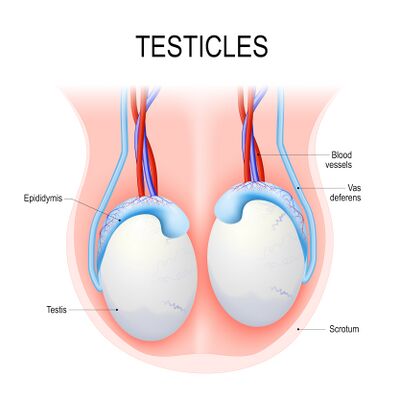 The scrotum is a fibro-muscular cutaneous sack located between the penis and the anus. It is a dual chambered structure forming an expansion of the perineum and has a midline separation of connective tissue called the scrotal raphe. The scrotum contain a set of testes which produce sperm. Located on the head of each testicle is the epididymis which stores sperm. The testicles are suspended from the abdomen by the spermatic cord. During ejaculation, sperm travel along two tubes called the vas deferens and the seminal vesicles.  The seminal vesicles are attached to the prostate. Where the vas deferens meet the seminal vesicles is called the ejaculatory duct.[1]

Smooth muscle fibres of the dartos muscle located within the scrotum help regulate testes temperature by wrinkling of the skin of the scrotum to manage heat exchange.[1]

The blood supply and the lymphatic drainage of the scrotum and the testes differ due to their locations during embryonic development. The testes are originally located on the posterior abdominal wall but during embryonic development they descend down the abdomen through the inguinal canal to reach the scrotum. Therefore, they keep their neuro-vascular and lymphatic supply from the abdomen.[1] 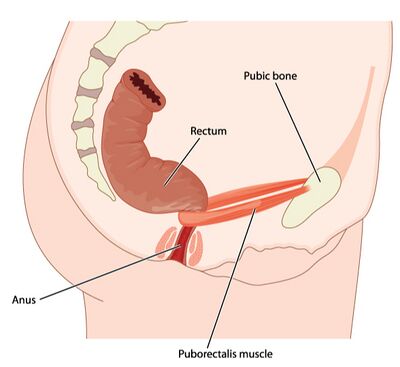