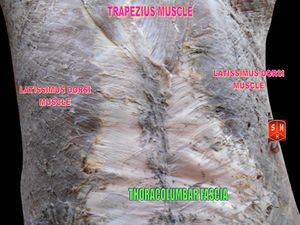 A fascia is a layer of fibrous tissue. A fascia is a structure of connective tissue that surrounds muscles, groups of muscles, blood vessels, and nerves, binding some structures together, while permitting others to slide smoothly over each other. Various kinds of fascia may be distinguished.  [1]

Like ligaments, aponeuroses, and tendons, fasciae are dense regular connective tissues, containing closely packed bundles of collagen fibres oriented in a wavy pattern parallel to the direction of pull. Fasciae are consequently flexible structures able to resist great unidirectional tension forces until the wavy pattern of fibres has been straightened out by the pulling force. These collagen fibres are produced by the fibroblasts located within the fascia. [1]

Fasciae are similar to ligaments and tendons as they are all made of collagen except that ligaments join one bone to another bone, tendons join muscle to bone and fasciae surround muscles or other structures. [1]

The video below gives a fascinating introduction to fascia.

There exists some controversy about what structures are considered "fascia", and how fascia should be classified. The two most common systems are:[3]

Fascia like other soft tissues has variable degree of elasticity that allow it to withstand deformation when forces and pressure are applied as it can recover and return to its starting shape and size. It response to load , compression and force, as at the beginning of loading, fascia has an elastic response in which a degree of slack is taken up .Over time, if loading persists in a slow and sustained manner, creep develops, which is a slow, delayed yet continuous deformation. After that , an actual volume change occurs as water is forced from the tissue .When loading ceases fascia return to its original shape .The restoration of shape occurs through elastic recoil via hysteresis, (which is the process of energy use and loss in which tissues are loaded and unloaded). The time needed for tissue to return to normal via elastic recoil depends on the uptake of water by the tissue and whether its elastic potential has been exceeded. When loaded for any length of time, tissues lengthen and distort until they reach a point of balance. If loading is sustained, over time, chronic deformation will result. [4]

Fascia is one of the richest sensory organs in our body, embedded in nerve endings and mechanoreceptors ( muscles spindles, Ruffini and Pacini corpuscles, Golgi endings and free nerve endings). Fascia plays a major role in the perception of posture and movement affecting our proprioception and coordination. Whenever we change our posture or move in any way fascial tissues’ mechanoreceptors deform and activate, sending afferent information into the spinal cord and brain. These messages are interpreted by our CNS then efferent information is relayed to our muscles. [5]

Fascial dysfunction can occur for a variety of reasons.  Lack of movement variations, sub-optimal nutrition, habitual postures and  trauma  can impact on the fascia’s ability to glide and slide, which normally helps the distribution and transmission of tension across the body.  Compensatory patterns of movement can then occur resulting in more stress on the fascial system.  Fascial dysfunction is associated with pain, stiffness, tissue fatigue and reduced performance and function.[6] Fascia can shorten, solidifies and thicken in response to:

This called a binding down of fascia .[7]

Fascial treatment is a manual therapy method focusing on releasing specific localized areas of fascia, which have been assessed and diagnosed as being involved in the pain and movement/functional limitations.  Through the appropriate manipulation of this precise part of the fascia, movement can be restored allowing optimal force transmission within the body so that you can move and function better.

Fascial treatment  should be supplemented with exercises and additional modalities e.g. joint mobilisation and strengthening designed to correct biomechanical deficiencies by addressing musculoskeletal strength and imbalances throughout the entire kinetic chain.