Jump to:navigation, search
Welcome to PT 635 Pathophysiology of Complex Patient Problems This is a wiki created by and for the students in the School of Physical Therapy at Bellarmine University in Louisville KY. Please do not edit unless you are involved in this project, but please come back in the near future to check out new information!!

Kwashiorkor is a form of protein-energy malnutrition (PEM) that occurs when there is not enough protein in the diet.1,2

The World Health Organization (WHO) defines malnutrition as "a cellular imbalance between supply of nutrients and energy and the body's demand for them to ensure growth, maintenance, and specific functions".1

It is most often encountered in children of overpopulated developing or underdeveloped countries, where their diet consist mostly of grains and starchy vegetables, with low to minimal amounts of protein included in their diet.  Common in areas of famine, limited food supply, and low levels of education.3  This diet is adequate in calories, but deficient in certain amino acids, which are constituents of proteins for vital growth.  During nursing, the mother is able to supply the essential amino acids and proteins needed via breastfeeding.  After the child is weaned from breastfeeding, their protein needs are neither met by milk or meat.4,5

The condition of kwashiorkor in children was first described in 1932.  Kwashiorkor, in African dialect, means "desposed child" ("deposed" from the mother's breast by a newborn sibling) and "red boy" due to the reddish orange discoloration of the hair that is a characteristic of the disease.5 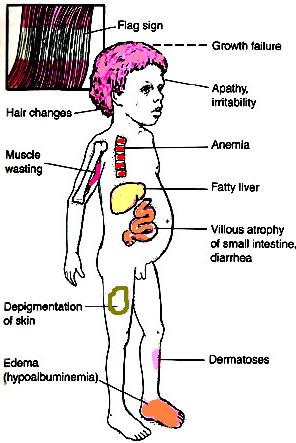 Kwashiorkor is most prevalent in overpopulated areas of the world in underdeveloped and developing countries, particularly in sections of Africa, Central and South America, and South Asia.5  Kwashiorkor is very rare in the United States, but does occur and is usually a sign of child abuse and neglect.2  PEM has been observed in United States in children with frequent hospitalization from chronic illnesses, and in the older population living in nursing homes.1

Protein malnutrition during childhood can lead to predisposed complications in later life, such as cirrhosis of the liver and underdevolped mentally.4  Protein-energy malnutrition is an umbrella term for deficiencies caused by diets lacking proteins and/or calories.  When there is a deficiency in both calories and protein, young children between ages 1-4 may suffer from marasmus (a condition characterized by general wasting of body tissues. Children with marasmus may become acutely emaciated and fail to grow.  Adequate calories and protein can alleviate symptoms associated with both marasmus and kwashiorkor.4,6

There are relatively few pharmacokinetic studies dealing with the use drugs as an intervention for children with kwashiorkor and PEM.  More studies are needed to establish the appropriate dose, safety, and to understand the effects of these drugs.11

Common MRI findings associated with children suffering from kwashiorkor included widening of Sylvian fissures and sulci, prominence of basal cisterns, and ventricular dilation resulting in cerebral atrophy, as well as periventricular white matter (PVWM).  No significant delay in the myelination process suggesting normal brain myelination which is not affected by the nutritional status.13

Causes of kwashiorkor other than protein-deficient diet include poor intestinal absorption, chronic alcoholism, kidney disease, infections, and trauma (burns) that lead to an increase need of protein and caloric intake and results in loss of protein due to the body's demand to repair.

Kwashiorkor and all forms of malnutrition can affect organs and the function of those organs.  Dietary protein is required for synthesis of amino acids producing proteins needed for tissue repair.  Energy is needed for basal metabolic rate essential for biochemical and physiologic functions.  Micronutrients are essential in metabolic functions as components and cofactors in enzymatic processes.1

Other systemic involvement includes fatty degeneration of the liver and heart, atrophy of small bowel, and decreased intravascular volume leading to secondary hyperaldosteronism.1,14

Treatment is dependent on severity of disease.  Supplementing the child with an adequate diet is the preferred medical treatment that has shown to reverse affects of Kwashiorkor.  If the individual is in shock, immediate medical intervention is needed to restore blood volume and maintain blood pressure to prevent any life-threatening conditions that could eventually result in death.2,3

The increase in caloric intake is first administered in the form of carbohydrates, simple sugars, and fats to provide the child with the adequate calories to provide energy for cellular function and metabolism.  Once energy demands are met, proteins are incorporated into the diet, along with essential vitamin and mineral supplements.2,3  The consumption of dried milk formula has been proven most efficient and effective for treatment of kwashiorkor, but many malnourished children have developed a lactose intolerance. Administration of enzyme lactase assists in milk tolerance.4,2,3  There are current and past studies evaluating the use of plant proteins to provide the adequate amounts needed.  Concentrated milk has provided best results, but mixtures of plant proteins have also been shown to be effective.  Cooking bananas were found to be excellent vehicles for the proteins and providing a source of carbohydrates.  This allowed for altering the diet by decreasing sugar intake, while providing nutrition and a sweet tasting alternative to products that are sweetened with sugar.15  Milk does have some disadvantages when used for medical treatment.  An excessive amount of milk can lead to severe diarrhea, resulting in dehydration and loss of nutrients.  A diet controlled by supplementing calcium caseinate, a source of protein, allows medical staff to differentiate if the the diarrhea is caused by excess carbohydrates (from lactose in the milk) or due to an infection.  This allows for an appropriate treatment of antibiotics to be administered for diarrhea due to an infection.  British Medical Research Council's Infantile Malnutrition Group at Mulago Hospital, Kampala have been looking at alternative substitutes for animal protein, which is not cost efficient.  The Group has viewed options using soya oil and cotton-seed oil, both of which provide nutrients and calories from fat that are essential for protein synthesis, and are cost efficient and native to areas where Kwashiorkor is prevelant.  The use of oil based substitutes allows for an increase in the intake of calories, which is important due to associated anorexia with the disease.16  There are other alternative options for adequate protein in diet with available resources, by utilizing complementary proteins in the diet. Examples include rice and beans and peanut butter and bread, which must be consumed at same time for the benefits.

The child's diet must be introduced slowly to limit potential problems associated with the change in cellular and organ function due to inadequate diet.  Problems are associated with excessive amounts of fat in the diet leading to bowel and intestinal dysfunction.2,3  The main component for medical management, and ensuring that the diet is both cost and resource efficient, is utilizing locally grown products that are cheap, tasteful, easily preserved, and can be incorporated into a variety of food options to provide adequate, additional, and essential nutrients.16

The primary medical intervention is to treat kwashiorkors with an adequate diet.  It is more likely for Physical Therapy to play a crucial role in the nursing home setting.  Once the patient's diet has been balanced and they are receiving the adequate amount of calories and nutrients, then physical therapy intervention can be applied.  If the patient's diet is not adequately met, then the physical therapy intervention will add an increase in energy demands that is not being met, and the intervention will be detrimential instead of beneficial.  Physical Therapy intervention should include a general strength and aerobic conditioning program to minimize signs and symptoms associated with kwashiorkor (muscle atrophy and fatigue).

Protein-energy malnutrition describes a spectrum of diseases that are a result of inadequate nutrients that often affect children living in poor communities of developing countries.17  Marasmus is the differential diagnosis of kwashiorkor.  Marasmus involves inadequate intake of protein and calories, without the presences of edema.1  The crucial diagnostic features include the percentage of weight loss based on aged norms, and if there is a presence of edema.  Using Harvard weight standards, children 60-80% of expected weight for their age are diagnosed with kwashiorkor is edema is present.  Children below 60% of expected weight for their age are classified with a diagnosis of marasmic kwashiorkor is edema is present or marasmus if edema is absent.17