A Bursitis is an inflamed bursa. The inflammation can be a result of friction from the overlying tendons. A bursa is mostly flattened and is filled with a thin layer of synovial fluid. It appears for example at a junction of a tendon on the bone. The iliopsoas bursa separates the muscle or tendon from bone and facilitates movement by reducing friction between the anterior hip capsule and the iliopsoas.[1] The iliopsoas bursitis is one of the affections related to anterior hip pain.

The iliopsoas bursa is the largest bursa of the human body and is bilaterally present in 98% of adults. This bursa is bounded by the musculotendinous junction of the M. iliopsoas (anteriorly) and by the fibrous capsule of the hip (posteriorly). It extends from the inguinal ligament superiorly to the lesser trochanter inferiorly and is flanked by the femoral vessels (medially) and the femoral nerve (laterally). [2]The bursa is always collapsed, when in healthy condition. In some situations the bursa is enlarged and contains fluid. When enlarged, it may cause a variety of symptoms such as pain, and immobility.[3][1] 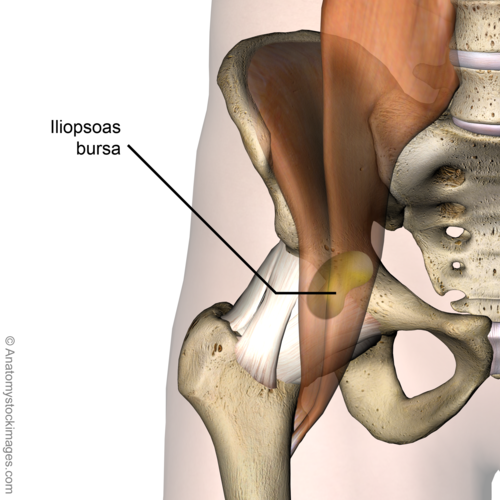 Iliopsoas bursitis is mainly caused by certain types of arthritis such as rheumatoid arthritis and psoriatic arthritis[4], acute trauma and overuse injury. When an acute or chronic occupational trauma incurred during sport activities, a bursitis is likely the result of multiple mini-traumas caused by vigorous hip flexion and extension. Iliopsoas bursitis is commonly seen in individuals participating in strength training, rowing, uphill running and competitive track and field.
There are a few theories concerning the origin of symptoms of iliopsoas bursitis. One of them points that when the hip is in flexion, both the iliopsoas muscle and the anterior part of the bursa move away from the hip joint.[1] If the hip is to be hyperextended suddenly, there is a great tension that stretches the muscle and the bursa. This stretching traumatizes the bursa. Another theory hypothesizes that when a flexed, abducted and externally rotated hip, with iliopsoas bursitis, is brought in an extension, it causes an interruption of the lateral to medial movement of the iliopsoas tendon. This results in a painful snapping of the tendon over the femoral head, and over the anterior hip capsule.
Inevitably, iliopsoas bursitis and tendinitis are interrelated, where inflammation of the one will result in inflammation of the other because of their close proximity. In their presentation, etiology and treatment, the two conditions are almost identical. Together it is called the iliopsoas syndrome.[1]
Patients with rheumatoid arthritis can also suffer from iliopsoas bursitis. Joint synovium is the main target of rheumatoid arthritis, but sometimes, synovial tissues of tenosynovium and bursae, are also involved. This results from the inflammatory process in the hip joint, extending in the iliopsoas bursitis. This kind of bursitis mainly affects young adults. It occurs slightly more often in women than in men.[1] (Level of evidence: A1)

Iliopsoas bursitis is often under-diagnosed due to its unspecific symptomatology. Careful and deep palpation in the femoral triangle medial or lateral to the femoral artery, with pressure applied on the bursa will result in pain. To elicit a patient’s hip pain, a clinical maneuver is commonly used. It involves the extension of their flexed, abducted and externally rotated hip where a tangible or audible ‘snap’ in the hip is almost always noted.[1] It is also possible that the inguinal region is painful when palpating it. A known or suspected osteoarthritis, snapping hip syndrome and a palpable inguinal or pelvic mass could raise the suspicion of an inflamed iliopsoas bursa and lead to further imaging examinations.[6]
To exclude other possible hip problems, and to get a more realistic idea about the size of the bursa, a 3D image is recommended, preferably an MRI-scan. The MRI-scan can distinguish the iliopsoas bursitis from other possible problems such as a tumor, a hernia, a hematoma and an aneurysm. However, a musculoskeletal ultrasound is the most cost-efficient way. Other frequently used options are to exclude problems of the bone are an X-ray and a bone scan. The computed tomography or CT-scan is also a commonly used instrument.[5][6]
An arthrography can determine instability and intra-articular pathology. A radiograph can also indicate an underlying problem of the hip, such as osteoarthritis and rheumatoid arthritis.[5] [6]

The patient can take anti-inflammatory medications as it is traditionally indicated.[1] (Level of evidence: 1A) The treatment of iliopsoas bursitis is individualized for each patient according to the cause, pain severity and associated symptoms. [9] If the symptoms are severe ultrasound-guided aspiration could be performed. Ultrasound can be used to show the iliopsoas muscle flipping over the iliacus muscle to confirm the diagnosis of snapping iliopsoas, and in many cases an associated iliopsoas bursitis will also be visualized. A combination of local anesthetic and corticosteroid injection performed into the iliopsoas bursa can often provide symptomatic relief and avoid the need for surgery.[10] (Level of evidence: 1B)
A surgical intervention may be necessary with refractory iliopsoas bursitis, such as bursectomy to remove the bursa, capsulectomy to gain access to the iliopsoas bursitis, or synovectomy – the surgical removal of a part of the synovial membrane, possibly with iliopsoas tendon release.[1] [9]

Traditionally the initial treatment of iliopsoas bursitis includes rest, stretching of the hip flexor muscles, strengthening exercises of the hip rotators and physical therapy. Generally successful stretching exercises to alleviate or ease the symptoms are the ones involving a hip extension, done for 6 to 8 weeks. The stretching program has to continue at least as long as the pain is present. The patients also have to avoid the aggravating activity of sports as much as possible during the initial treatment. [1][11](Level of Evidence: 1A).

The majority of the patients with iliopsoas bursitis have a considerable hip rotation muscle weakness. This has been shown with manual muscle testing as well as isokinetic evaluation. A reduction in symptoms can be achieved with an improvement in hip rotation strength.[1] Strengthening exercises for the hip rotators (both internal and external), hip flexors, buttocks, quadriceps and hamstrings are included in the treatment protocol and performed daily for as long as the symptoms persist.[1] [11]
During gait, the weakened gluteal muscles can cause for a decrease in hip stability. That is why the retraining of the gait is also very important and forms a final critical component of the treatment regime. During these exercises the patients have to maintain an appropriate hip stability by voluntarily contracting the deep gluteal muscles of the stance leg during the mid to late portion of the stance phase of the gait cycle.[1] [11] Before being able to reach the automaticity of contracting the gluteal muscles during gait, the patient has to do strengthening exercises. A good exercise for example is the pelvic drop you can find here.[12](Level of Evidence: 2C)]
The clinical practice of exercise therapy as a major component of rehabilitation for groin pain in athletes continues to be supported by the available evidence to date. Exercise, particularly strengthening exercises of the hip and abdominal muscles, could be an effective intervention for patients suffering from groin pain, thus iliopsoas bursitis or iliopsoas syndrome. Although literature provides foundational evidence that the exercises should be performed as static to functional, regarding the most effective intensity and frequency of exercise, there is no clear evidence due to lack of reporting.

See more exercises on Therapy exercises for the hip