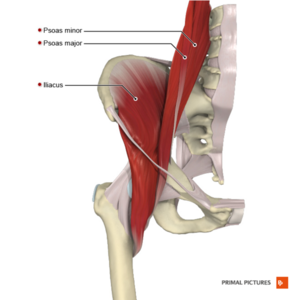 A compound muscle composed of the iliac and psoas muscles

The iliopsoas muscle complex is made up of three muscles that include the iliacus, psoas major and psoas minor. This complex muscle system can function as a unit or intervene as separate muscles.[1]

The iliopsoas muscle is the strongest hip flexor and assists in external rotation of the femur, playing an important role in maintaining the strength and integrity of the hip joint. It is essential for correct standing or sitting lumbar posture, and during walking and running.

The iliopsoas musculotendinous unit is part of the inner muscles of the hip and forms part of the posterior abdominal wall, lying posteriorly at the retroperitoneum level.[1]

Origin: The iliopsoas muscle has its origin at the fusion of the psoas major and iliacus muscles. This fusion occurs at the level of L5-S2, and the combined muscles pass from the pelvis to the thigh under the inguinal ligament.

Insertion: The iliopsoas muscle inserts into the lesser trochanter of the femur via the psoas tendon. .

Function: Flexor of the thigh and trunk; Assists in external rotation of the femur; Lateral flexor of the lower vertebral column[2]

Injury to the iliopsoas may cause hip pain and limited mobility.

Iliopsoas tendinopathy refers to a condition that affects the insertion of the muscle on the femur, and can occur with repetitive hip flexion and other deficits of the biomechanical system resulting in chronic degenerative changes of the tendon.

Impingement of the Iliopsoas Tendon: Following an operation to replace the femoral head, movement of the artificial head may during a hip extension press against the surrounding soft tissues, including the tendon of the iliopsoas complex. The surgeon decides the course of action.

Iliopsoas Bursitis: Bursitis that involves the tendon of the iliopsoas complex is an inflammation that enlarges the volume of the bursa and produces pain on movement.

In pediatrics, in the presence of spasticity eg cerebral palsy and the presence of important contractures, surgery is performed with distal tenotomy. This reduces the difficulty of walking and enables a posture that makes the child independent when possible.

The iliopsoas muscle can cause compression of the femoral nerve and cause knee pain. Before deciding on surgical treatment and releasing of the femoral nerve, the patient should learn stretching exercises to reduce the tension generated by the muscle. Generally, if the patient can follow the physiotherapy indications, the use of surgery can be avoided.

Hypertrophy of the muscle may be responsible for the compression of the femoral nerve and cause knee pain. Before deciding on surgical treatment to release the femoral nerve, the patient should learn stretching exercises to reduce the tension generated by the muscle. Generally, if the patient can follow the physiotherapy indications, the use of surgery can be avoided. [1]