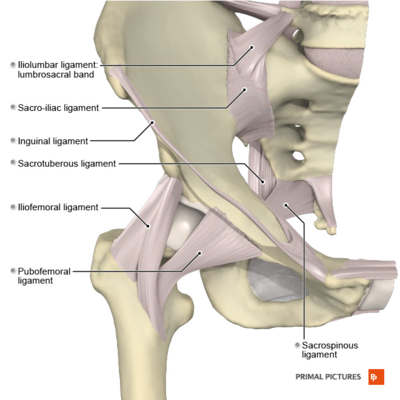 The hip joint is a ball and socket joint that is the point of articulation between the head of the femur and the acetabulum of the pelvis.

The hip joint connects the lower extremities with the axial skeleton. The hip joint allows for movement in three major axes, all of which are perpendicular to one another.

In general, the hip joint capsule is tight in extension and more relaxed in flexion. 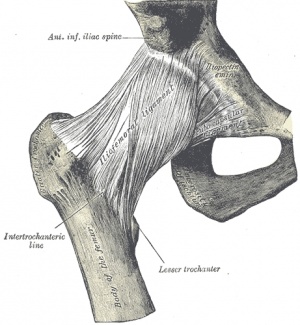 The capsular ligaments include

The ligamentum teres (ligament of the head of the femur) 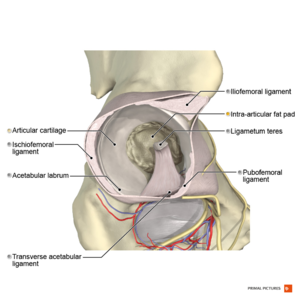 The labrum forms a fibrocartilagenous extension of the bony acetabulum, mostly composed of type 1 collagen that is typically between 2-3mm thick. It lines the acetabular socket and attaches to the bony rim of the acetabulum. It has an irregular shape, being wider and thinner anteriorly and thicker posteriorly.[3][4] On the anterior aspect, the labrum is triangular in the radial section. On the posterior aspect, the labrum is dimensionally square but with a rounded distal surface.[5][6]

The labrum has three surfaces:

The transverse ligaments surround the hip and help hold it in place while moving.

It is thought that the majority of the labrum is avascular with only the outer third being supplied by the obturator, superior gluteal and inferior gluteal arteries. There is controversy as to whether there is a potential for healing with the limited blood supply and this is an important clinical consideration. The superior and inferior portions are believed to be innervated, containing both free nerve endings and nerve sensory end organs (giving the senses of pain, pressure and deep sensation).[3][4]

The functions of the acetabular labrum are:[3]

Numerous variations in the blood supply to the hip. 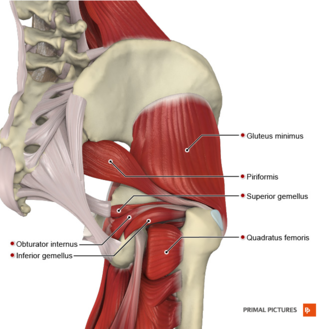 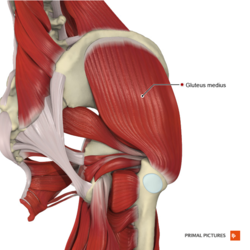 Full extension of the hip joint is the closed packed postion because this position draws the strong ligaments of the joint tight, resulting in stability.

The hip joint is one of the only joints where the position of optimal articular contact (combined flexion, abduction, and external rotation) is the open-packed, rather than closed packed position, since flexion and external rotation tend to uncoil the ligaments and make them slack.[2] 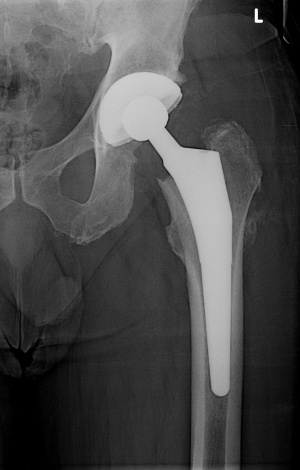 When any of the features of lateral balance control fails, the supporting is upset. The pelvis tends to fall on the unsupported side when the individual stands on the affected limb. This is called Trendelenburg sign. The person walks with a characteristic lurching or waddling gait.

In A: Negative Trendlenburg's sign. The hip abductors are acting normally tilting the pelvis upwards when the opposite leg is raised from the ground. 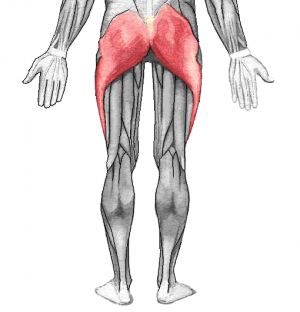 In B: Positive Trendlenburg's sign. The hip abductors are unable to control the dropping of the pelvis when the opposite leg is raised.
2. Sciatic nerve