The iliopsoas muscle is the strongest flexor of the hip and assists in external rotation of the femur, playing an important role in maintaining the strength and integrity of the hip joint[1]. It also acts as a stabilizer of the lumbar spine and pelvis[2]. Pathologic conditions of the iliopsoas have been shown to be a significant cause of hip pain and/or dysfunction and include asymptomatic snapping hip syndrome, tendonitis, bursitis and impingement[2]. Additionally, conditions related to the iliopsoas muscle have been implicated in lumbopelvic disorders, such as low back and gluteal pain, intense groin pain particularly in the athletic population, and even anterior thigh and knee pain[3].

It is worth noting that Iliopsoas tendonitis implies inflammation of the tendon or area surrounding the tendon. Studies have revealed the presence of inflammation in the acute phase of this condition, however, it is well established that chronic tendon pathologies lack an inflammatory process. Rather, they are characterized by a failed healing response and tendon degeneration[4]. For this reason, it is arguably more accurate to classify this condition as a tendinopathy, as opposed to tendonitis, when referring to it in general terms. Overall, an iliopsoas tendinopathy refers to a condition that affects the insertion of the muscle on the femur, and can occur with repetitive hip flexion and other deficits of the biomechanical system resulting in chronic degenerative changes of the tendon[1].

Furthermore, due to the close proximity of the Iliopsoas tendon and the related bursa, inflammation of one of these structures inevitably causes inflammation of the other. Therefore, iliopsoas tendinitis and iliopsoas bursitis are commonly described synonymously, as the clinical presentation, evaluation, and management are nearly identical[5].

The iliopsoas muscle complex is made up of three muscles that include the iliacus, psoas major and psoas minor. The iliacus originates on the iliac fossa and attaches into the psoas tendon and lesser trochanter of the femur. The psoas major also inserts into the lesser trochanter of the femur via the psoas tendon and arises from numerous structures including the transverse processes of the lumber vertebrae, the intervertebral discs and vetebral body margins of T12 to L5 and the tendinous arches. Lastly, the psoas minor originates from the vertebral bodies of T12 and L1 and has an attachment onto the iliopectineal eminence and the iliac fascia. The psoas minor is present in only 60% of individuals[6].

The psoas major and illiacus muscles merge around the level of L5-S2. Before attaching onto the lesser trochanter, the iliopsoas travels from the pelvis, into the thigh region, under the inguinal ligament where it crosses anterior to the acetabulum, between the anterior inferior iliac spine (laterally) and the iliopectineal eminenence (medially). The largest bursa of the hip joint is the iliopsoas bursa which is located deep to the iliopsoas musculotendionous junction and anterior to the hip joint capsule. The bursa has been reported to communicate with the hip joint in ~15% of patients[7]. 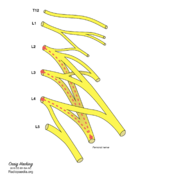 A tendinopathy is a structural change of the normal fibrillar tendon architecture and is proposed to be a result of the microtrauma that occurs from chronic overuse of the tendon[1]. Although the exact etiology is not fully established, the two most commonly described causes of irritation to the iliopsoas tendon include either acute injury or overuse injury from repetitive microtrauma[5].

Some examples of activities that may predispose individuals to an iliopsoas injury include ballet, cycling, rowing, inclined running, track and field, soccer and gymnastics[5].

Adolescents during growth spurts have relatively decreased flexibility of the hip flexors, potentially putting them at greater risk[5].

Rheumatoid arthritis has been reported to be one of the main causes of Iliopsoas bursitis[12].

In general, iliopsoas pathologic conditions, such as tendinitis, bursitis, snapping and impingement, have been deemed to be the main cause of chronic groin pain in roughly 12-36% of athletes and in 25-30% of athletes with acute injury to the groin region[2].

The clinical presentation of an iliopsoas tendinopathy is variable, depending on various factors. An Iliopsoas tendionopathy that is not symptomatic is often characterized by a palpable and audible snap that occurs from flexion and extension of the hip[11]. Persistent irritation of the tendon may lead to inflammation of the tendon, underlying bursa or both. Chronic irritation will likely not be associated with inflammation but is instead characterized by painful degeneration and fibrosis of the tendon[9].

A history of insidious deep groin or anterior hip pain is common[5]. Initially, pain is provoked with onset of activity, decreasing shortly after. Symptoms may progress to constant pain during activity that diminishes only with rest and lastly, to the presence of pain with both activity and rest[5]. Diagnosis is usually delayed and the average estimated time between initial symptoms and diagnosis is between 32-41 months[13].

Laboratory studies, only indicated if the diagnosis is unclear, may include a CBC count, erythrocyte sedimentation rate or C-reactive protein, rheumatoid factor, anticyclic citrullinated peptide antibody, antinuclear antibody, and urinalysis. These tests are useful when considering pathology to the abdomen and pelvis that may present as groin pain such as colon cancer, diverticulitis, prostatitis, salpingitis, renal calculi, appendicitis and psoas abscess[5].