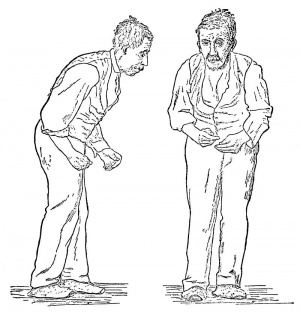 Causes of walking/gait disorders can range from arthritis to a neurological condition to something as simple as ill-fitting footwear. The variety of gait disorders call for different treatments.

Some common causes are:

For normal gait many all of the following functions and systems are required to be intact: locomotor function (for initiating and sustaining rhythmic gait), balance, postural reflexes, sensory function and sensorimotor integration, motor control, the musculoskeletal apparatus and cardiopulmonary functions. Afferent nerves from the visual, vestibular and proprioceptive systems provide essential information on the position of the body and its parts. Efferent system comprises descending pathways including the pyramidal tract, peripheral nerves, neuromuscular end plate and muscles.

The gait cycle is divided into a stance and swing phase. The stance phase constitutes approximately 60 % of the gait cycle and is subdivided into initial contact, loading response, mid-stance, terminal stance and pre-swing. The swing phase constitutes 40% and is subdivided into initial swing (toe-off), mid-swing (tibia vertical) and terminal swing, terminated by the heel striking the ground. Both feet are on the ground at the beginning and end of the stance phase, these two double support periods lasts for approximately 10–12 % of the gait cycle.[2]

What are some types of gait disorders?[edit | edit source]

Gait disorders can be classified into musculoskeletal and neurological.

Antalgic gait.  This type of gait is seen in patients with leg pain, as the patient weight bears on the painful leg for as short time as possible, resulting in short stance phase on the affected side. The patient appears to be limping.[1]

Vaulting gait. This type of gait is common in children with leg length discrepancy. It is defined by plantarflexion, decreased hip and knee flexion of the short leg during stance phase, to ensure toe clearance of the swing limb.  [1][3]

Spastic hemiparetic gait. It is characterized by unilateral leg extension and circumduction, in which the paretic leg performs a lateral motion (circumduction ) during the swing phase.

Spastic diplegic gait (scissors gait). It is characterized by bilateral leg extension and adduction, the legs appear to be stiff. When spasticity in the adductors is marked it results in scissoring gait where the legs cross in scissors-like pattern.

Steppage gait. In this gait the patient must lift the leg higher than usual and the patient is unable to stand or walk on their heel. It is cause by weakness in the ankle dosriflexors.

Waddling gait (myopathic gait). In waddling gait weakness in the gluteus medius muscles leads the hip on the swinging side to drop during gait, in an attempt to counteract, the patient bends the trunk towards the other side, resulting in the gait to appear waddling.

Parkinsonism gait. The gait is slow with a short step length and a narrow base. The feet are lifted less high than normally resulting in shuffling. Patients with parkinsonism can develop a Freezing gait in which there is blockage of movement during turning or when approaching obstacles or narrow passages such as doors

Cerebellar ataxic gait. The gait is broad based, insecure and lacks coordination. Leg movements and step length are irregular and variable.

Senosroy Ataxic gait. In this gait the patient’s proprioception is disturbed resulting the gait to appear broad based and insecure. The patient uses visual control to compensate for the disturbed proprioception.

Hyperkinetic gait. this gait is seen in basal ganglia disorders including chorea, dystonia and Wilson's disease.[1][2]

The gait should be observed from all sides, while the patient walks a distance of at least several meters without obstacles and preferably without shoes. Normal walking appears to be rhythmical, flowing and effortless, with freely swinging legs and with an upright body posture. Normal walking is accompanied by movements of the head, the trunk and the arms.

The parameters that should be clinically examined include step length, stride length, step width, rhythm, speed, posture, swinging of arms and legs and the duration and type of contact with the floor.

A general neurological examination should follow evaluation of gait.

The examination is advised to be done most of the patient’s clothes removed to detect any orthopedic abnormalities such as asymmetries or postural abnormalities. [2]

It depends on the cause. Assistive devices such as canes and walkers may help in some cases in which balance is a problem.

There are numerous etiologies that could lead to gait disturbances. The following potential causes should be ruled out and to come up with a final diagnosis.

The prognosis depends on the etiology. Metabolic etiologies of gait disturbances have a relatively good prognosis. If the metabolic disorder is addressed the patient mostly recovers without lasting symptoms. While neurologic conditions often have poor prognosis, as some neurologic conditions have no cure and must be treated symptomatically.  [1]