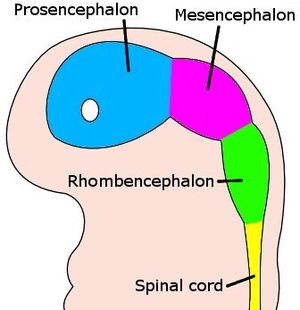 The three main parts of the brain are split amongst three regions developed during the embryonic period: the forebrain, midbrain and hindbrain also known as the prosencephalon (telencephalon and diencepalon), mesencephalon, and rhombencephalon respectively.

The forebrain is the large and complicated structure that distinguishes the human brain from other vertebrate brains. The forebrain is responsible for a variety of functions including receiving and processing sensory information, thinking, perceiving, producing and understanding language, and controlling motor function It has two major divisions: the diencephalon and the telencephalon. 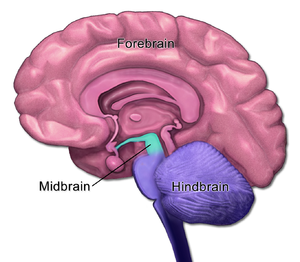 The midbrain or mesencephalon, is the portion of the brainstem that connects the hindbrain and the forebrain. All sensory and motor information that travels between the forebrain and the spinal cord passes through the midbrain, making it a relay station for the central nervous system.

The hindbrain extends from the spinal cord and is composed of the metencephalon and myelencephalon. It includes the cerebellum, reticular formation, and brain stem, which are responsible for some of the most basic autonomic functions of life, such as breathing, heart rate, digestion and movement. The brain stem contains the pons and medulla oblongata. 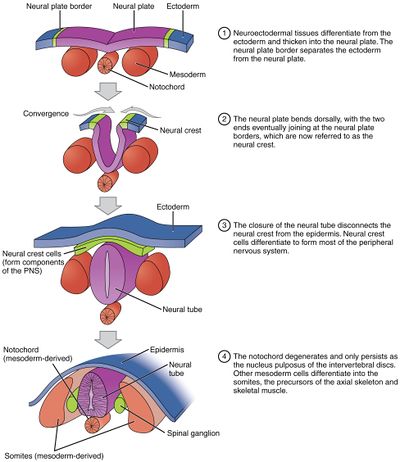 The brain is a complex organ composed of gray parts and white matter, which can be hard to distinguish. The embryonic nervous system begins as a very simple structure, essentially just a straight line, which then gets increasingly complex.

To begin life, a sperm cell and an egg cell fuse to become a fertilized egg. The fertilized egg cell (zygote) starts dividing to generate the cells that make up an entire organism. Sixteen days after fertilization, the developing embryo’s cells belong to one of three germ layers that give rise to the different tissues in the body.

As the embryo develops, a portion of the ectoderm differentiates into a specialized region of neuroectoderm, which is the precursor for the tissue of the nervous system[3].