The cerebellum is a vital component in the human brain as it plays a role in motor movement regulation and balance control. The cerebellum [1] (see image on R, horizontal fissure marked red)

Damage to this area in humans results in a loss in the ability to control fine movements, maintain posture, and motor learning

The cerebellum is neuron-rich, containing 80% of the brain’s neurones organized in a dense cellular layer, and it's surface area when unfolded is nearly 75% of the surface area of the cerebrum.[1]

The cerebellum is located at the back of the brain, immediately inferior to the occipital and temporal lobes, and within the posterior cranial fossa. It is separated from these lobes by the tentorium cerebelli, a tough layer of dura mater.

It lies at the same level of and posterior to the pons, from which it is separated by the fourth ventricle.

There are three ways that the cerebellum can be subdivided – anatomical lobes, zones and functional division[2]

The cerebellum attaches to the brainstem by three groups of nerve fibers called the superior, middle and inferior cerebellar peduncles, through which efferent and afferent fibers pass to connect with the rest of the nervous system. 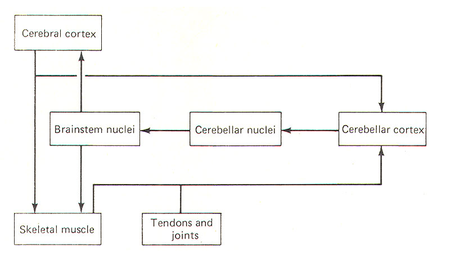 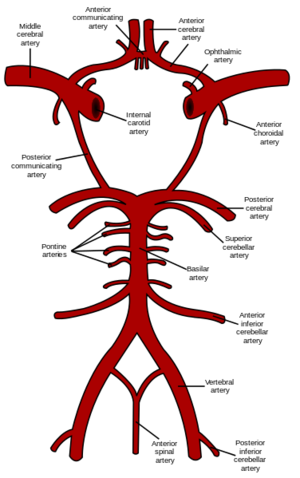 The SCA and AICA are branches of the basilar artery, which wraps around the anterior aspect of the pons before reaching the cerebellum. The PICA is a branch of the vertebral artery.

Venous drainage of the cerebellum is by the superior and inferior cerebellar veins. They drain into the superior petrosal, transverse and straight dural venous sinuses.

The cerebellum receives afferent information about voluntary muscle movements from the cerebral cortex and from the muscles, tendons, and joints. It also receives information concerning balance from the vestibular nuclei. Each cerebellar hemisphere controls the same side of the body, thus if damaged the symptoms will occur ipsilaterally.[1]

Dysfunction of the cerebellum can produce a wide range of symptoms and signs.

The most common cause of cerebellar dysfunction is alcohol poisoning, but also trauma, multiple sclerosis, tumors, thrombosis of the cerebellar arteries and stroke.[1]

The clinical picture depends on the functional area of the cerebellum that is affected[3].

Occlusion of PICA cause Wallenberg syndrome

The cerebellum appears to play a role in many types of behaviours. Cerebellar damage not only affects movement coordination but also disrupts some perceptual abilities such as visual motion discrimination. The cerebellum acts to make predictions for different cerebral areas of the brain to optimize their abilities-- helping to predict optimal motor commands for movement control and upcoming sensory events for sensory perception possibly explaining how cerebellar damage affects other behaviours.[5]

Physical therapy intervention is the primary treatment for gait ataxia and imbalance in individuals with cerebellar damage. Physical therapy aims to restore movement and function following cerebellum injury using movement, exercise and manual therapy, as well as education and advice.

Physical therapy may include exercises such as

An important finding of a recent study[7] was that the level of challenge to balance was more important than the duration of exercise in producing Neurorehabilitation and neural repair. Cerebellar patients with ataxia can benefit from a home exercise program focused on balance training (with significant improvements after just six weeks). Highlighted was the importance of the 1. level of challenge to balance being of upmost importance 2. individualizing the program and offering continued training and progression if necessary to see effect retention.

Current research is going on into the search for neurogenesis of the central nervous system. An exciting prospect. Some of the news is reported below.

The below 4-minute video gives a great 3D view of the cerebellum and highlights it's similar structure to that of the cerebrum.