The vestibular system is located within the inner ear. Laterally, it is bordered by the middle ear and medially, lies adjacent to the temporal bone.[1] The components of the system can be divided into three parts:

In conjunction with other sensory inputs, such as vision and proprioception, information from the vestibular system coordinates movement between the eyes and head and provides important information about postural orientation.[2]

The vestibular system monitors the motion and position of the head in space by detecting angular and linear acceleration. The 3 semicircular canals in the inner ear detect angular acceleration and are positioned at near right angles to each other. Each canal is filled with endolymph and has a swelling at the base termed the ampulla. The ampulla contains the cupula, a gelatinous mass with the same density as endolymph, which in turn is attached to polarized hair cells. Movement of the cupula by endolymph can cause either a stimulatory or an inhibitory response, depending on the direction of motion and the particular semicircular canal[3]. There is a vestibular apparatus within each ear so under normal circumstances, the signals being sent from each vestibular system to the brain should match, confirming that the head is indeed rotating to the right, for example. 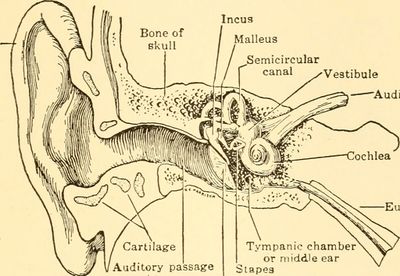 The peripheral vestibular system consists of a bony and membranous labyrinth.[2] The bony labyrinth forms 3 semicircular canals, the cochlea, and an ovaluar chamber called the vestibule. This bony shell is filled with perilymphatic fluid that suspends a membranous labyrinth within it.

The membranous labyrinth contains 5 sensory organs: 3 semicircular ducts and 2 otolith organs known as the saccule and utricle. All are filled with endolymph, a liquid whose composition is similar to intracellular fluid.

The semicircular ducts are three, orthogonal rings encased within the semicircular canals.[2] They are responsible for detecting head rotation. The ducts are named in accordance with their location and the direction in which they are optimized to register rotary movement: anterior (also: superior), posterior (also: inferior), and lateral (also: horizontal).

The anterior and posterior canals are oriented 45 degrees lateral to the sagittal plane, such that the posterior and anterior canals on opposite sides of the body are aligned in the same direction.[2] The lateral canal is pitched 30 degrees up from the horizontal plane. Each ring has two ends that terminate at the utricle located centrally. Within each set of endpoints, the base of one has a widening known as the ampulla.

The otolith organs are located in the vestibule.[2] They take the form of two sacs that detect linear acceleration of the head. The utricle is responsible for sensing horizontal movement (i.e. forward-backwards and left-right movement), while the saccule serves to detect movement in the sagittal plane (i.e. up-down movement). 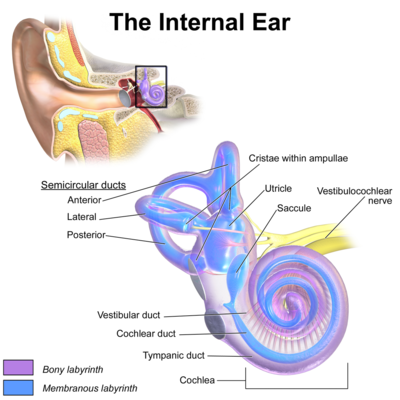 The semicircular ducts and otolith organs contain a unique set of sensory epithelium and hair cells. These cells function to convert information about head acceleration into neurologic signals that are later processed by the central vestibular system.[2]

The sensory epithelium of the semicircular ducts is known as the crista ampullaris and is located within the ampullae.[2] The corresponding tissue within the utricle and saccule is known as the macula and is located on the floor and medial wall of each organ, respectively.[1] In both cases, sensory epithelium supports a set of hair cells that function as mechanoreceptors. 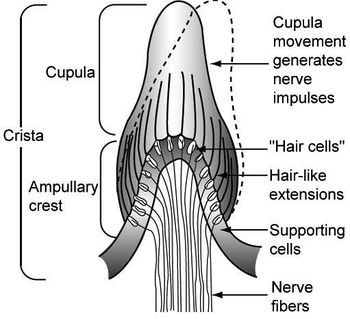 Within the ampullae, a thick gelatinous substance called the cupula overlies the crista.[1] The processes from hair cell receptors project into the cupula, bending in response to pressure differentials across the weighted membrane. The macula of the utricle and saccule is also covered in a gelatinous membrane, but, unlike the cupula, contains calcium carbonate crystals called otoconia.[2] These crystals play an important role in bending hair cells (and therefore, detecting linear acceleration) sthrough inertial drag and shearing.

The vestibular nuclei are the main processors of vestibular input.[2] In addition to vestibular afferents, they receive and integrate information about vision, hearing, proprioception, and touch. In total, there are four nuclei which are named based on their location within the pons: superior, inferior, medial, and lateral. 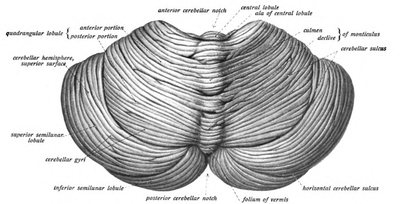 Vestibular pathways primarily act on muscles of the eye and those that maintain posture and balance. For example, the vestibuloocular reflex (VOR) is responsible for gaze stabilization during short and fast rotational head movements. When the head turns, vestibular output to the extraocular muscles signals conjugate eye movement in the equal and opposite direction.[1] The result is a stable visual image, despite changes in head orientation.

The following video provides an overview of vestibular system

Vestibular dysfunction can occur through a variety of mechanisms, including infection, direct trauma, and neoplasm.[5] Below is a list of conditions that affect the peripheral vestibular system:

Other disorders are due to pathology of the central vestibular system:

Vestibular dysfunction is often accompanied by symptoms such as vertigo, dizziness, tinnitus, nausea/vomiting, and hearing loss.[6] These symptoms, and associated losses in vestibular function, can result in impaired balance, falls, depression, anxiety, disruption of work/daily activities of living, and disability. Vestibular rehabilitation therapy has been shown effective for treating a variety of vestibular conditions that can be implemented by physical therapist professionals.[7] Therefore, it is important for physical therapists to be trained in how to identify, treat, and when necessary, refer patients with known or suspected vestibular dysfunction.