The main function of the external genitalia is to protect the internal genital tract from infection, to act as sensory tissues during sexual intercourse, and assist in micturition. The vulva receives parasympathetic and sensory supply from two different innervation roots. The anterior part of the vulva is subserved by the ilioinguinal nerve (L1) and the genital branch of the genitofemoral nerve (L1,2). The posterior part of the vulva is subserved by the pudendal nerve (S2,3,4) and the posterior cutaneous nerve of the thigh. For the clitoris and vestibule, the parasympathetic innervation comes from the cavernous nerves a branch from the uterovaginal plexus[1].

The mons pubis is a bed of fat covering the symphysis pubis underlying the skin. With the onset of puberty, pubic hair growth is initiated on both the mons pubis and the labia majora.This occurs at the around the seccond stage of the Tanner's staging of breast development with accompanying hair growth under the armpits.

The labia majora consist of two fleshy folds of skin, which extend from the mons pubis to the posterior commissure. The outer skin of this very sensitive area is covered by hair, the inner surface is smooth, hairless and contain sweat and sebaceous glands that produce lubricant secretion. 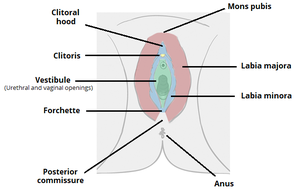 Two hairless skin folds, which are called the labia minora, lie within and medial to the labia majora. They form the inner protective layer of the female genitalia by surrounding the openings to the vagina and urethra. Posteriorly, they join by forming skin folds called the fourchette. The labia minora are even more sensitive than the labia majora and are very heavily supplied with blood. During sexual stimulation they tumesce and become more sensitive to stimulation.

The clitoris is the most sensitive part of the female body and can be found between the upper end of the labia minora. It is formed of erectile corpora cavernosa tissue and consists of a bundle of nervous endings. It is highly sensitive and can become erect during sexual stimulation. It is considered homologous to the penis in the male anatomy.

The area between the two labia minora where the vagina and urethra opening are located is called the vestibule.

The hymen is a thin membrane of soft tissue covered by stratified squamous epithelium that lies deep within the vaginal orifice. Shapes of the hymen are variant which allows menstrual blood flow. It is usually torn during the first sexual intercourse but can also tear through sportive activities or worn out gradually with constant activity.

The bilateral racemes glands are located at the sides of the vaginal orifice. These glands secret mucous that helps maintain the acidic pH balance of the vagina (pH 4.5 or lower)[4] and acts as a lubricant during sexual intercourse.

The Skene's gland is a para urethral gland which opens adjacent to the distal urethra. At times, the Skene's duct may be obstructed because the gland is infected causing skene's duct cyst. If the duct is infected it causes recurrent urinary tract infection and if the cyst is larger than 1 cm it cause dyspareunia.[5] 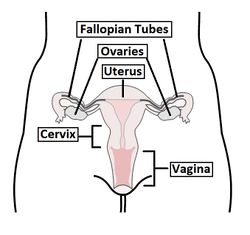 The vagina is a fibromuscular tube which extends from the vulva to the uterus in an oblique direction forming an angle of about 60° with the horizontal line, directed upwards and backwards. The size of the vagina ranges from 6-8 cm in length. Due to its obliquity, its posterior wall is larger than the anterior wall. It is more like the H shape than a round tunnel. Internally within the pelvical floor, it is located anterior to the rectum and posterior to the urethra and bladder. 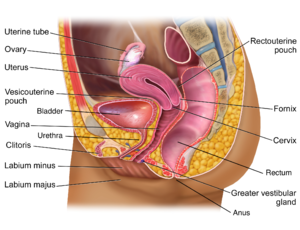 Between the connection of the upper end of the vagina and the cervix, it forms two fornixi, the anterior fornix, and the posterior fornix.

The vagina acts as a birth canal, the outlet for the menstrual blood flow and a cavity for sexual intercourse.

The uterus is a pear-shaped, hollow central landmark organ of the pelvic anatomy and internal genitalia. Its lower end is located at the level of the ischial spine, and supported by pelvic floor muscles and cervical ligaments. It is highly muscular and relatively mobile. The cavity lining is covered with endometrium which can be affected by a disease called endometriosis. 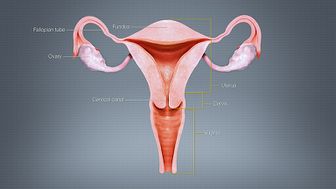 The cervix: The lowest part of the uterus connecting it to the vagina.

The body: The largest part of the uterus in which the unborn baby is growing.

The fundus: The tip of the uterus which extends all the way to the anterior stomach wall. In post-partum women the fundus can be palpated just below the navel. Physiologically, the fundal height should depress around one finger-width a day during puerperium until it can no longer be palpated.

The uterus is located anatomically in anteversion anteflexion position anterior to the rectum and posterior and superior to the bladder. 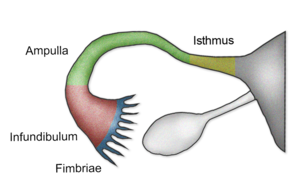 Fimbriae: Finger-like projections, entry point of the ovum into the fallopian tube when it is ejected from the ovary.

Infundibulum: A funnel shaped opening to the tube, the fimbriae attaches to it.

Ampulla: The widest section of the tube, this is where the fertilisation of the ovum with the sperm happens.

Isthmus: The narrowest part of the fallopian tube which connects the tube with the uterine wall. 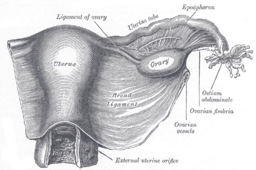 The ovaries are two almond-shaped organs which main functions are the production of ova and sex hormones. They attach to the uterus by ovarian ligaments, and to the broad ligament via the mesovarium, which is a peritoneal ligament[6].

Bartholiniti: Disease in which the Bartholin's glands can be infected or inflamed. When the infection is due to a bacterial contamination it can easily be treated with antibiotics. In case of obstruction it can cause the vulva to swell by forming a cyst or abscess. In this case, surgical intervention will be the necessary treatment.

Vaginal Fistula: An abnormal connection between the vagina and adjacent pelvic organs that can happen as a result of prolonged labour. The fetus exerts pressure during delivery causing obstruction of the blood supply and necrosis. In most cases the baby does not survive the birth due to the complication. Three types of vaginal fistula are distinguished:

Patients with vaginal filstula (also called obstetric fistula) often suffer tremendously if the fistula is not closed surgically due to leaking of urine or faeces. These patients may be ostracised by their families or social environment.

Endometriosis. Chronic inflammation of the lining layer of the cavity of the uterus.

Salpingitis: An acute or chronic inflammation of the fallopian tube caused by bacterial infection. The infection causes adhesion formation that may result in infertility or ectopic pregnancy[9]. This condition can also be one of the causes of pelvic inflammatory disease. It is diagnosed by using a diagnostic abdominal or vaginal ultrasound.