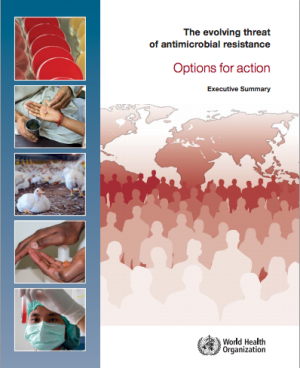 "The evolving threat of antimicrobial resistance - Options for action". Policy document from WHO

Antimicrobial resistance (AMR) is not a recent phenomenon, but it is a critical health issue today.  Over several decades, to varying degrees, bacteria causing common infections have developed resistance to each new antibiotic, and AMR has evolved to become a worldwide health threat. With a dearth of new antibiotics coming to market, the need for action to avert a developing global crisis in health care is increasingly urgent.

When microorganisms such as viruses, bacteria, parasites, fungi changed in some way and become have resistant to the medical drug that used to treat their infections and change it to be ineffective. AMR is a general term for many types of resistance such as antiviral, antibacterial, antiparasitic and antifungal drugs.

Some of the most common bacterial infections resistant to antibiotics are:

It isn’t an isolated responsibility and needs combined efforts. We can classify it into individual level, governmental or national level even global levels.[2]

We are in need of stricter laws and supervision to control irrational and illegal use of medicines.

WHO stated that we not only develop AMR from medications we have it also developed by the widespread use of antibiotics for livestock with the aim of preventing their illness and increase their productivity. So the illness and AMR transmit in for us in food-borne illness.

As the population is in a continuous state of movement and world travel is more readily available, the spread of drug resistance is easily moved from one location to another and sometimes between continents.[3]

AMR is widely spread all over the world in a way that creating new antibiotic drugs can't go with it; so need more effort to control these issues and to speed up process of creating new antibiotics. AMR is life-threatening and one of the major causes of morbidity and mortality; it makes it difficult for a patient who has AMR to receive suitable treatment when they are in need of it. The cost of treatment increases for the patients who develop antimicrobial resistance for many antibiotics. In addition, the prognosis of many important surgeries becomes complicated.

In addition to a substantial financial burden that national health-care budgets can ill afford, AMR has economic consequences far beyond the health sector, such as damaging repercussions on international travel and trade resulting from the cross-border spread of resistant infections. The cost of not acting against AMR needs to be considered when deciding resource allocation and assessing interventions.

What is antimicrobial resistance WHO