Sexual desire relies on a variety of factors both physical and psychological. Testosterone levels play an important role in physiological libido.[2]

Erectile function forms an important part of a man’s sexual function, but it is only a part of the picture.

1.Erectile dysfunction (ED) is a component of male sexual dysfunction and can be defined as the persistent inability to achieve or maintain an erection firm enough or lasting long enough to participate in sexual activities.[3]

Early Prostate Cancer (PCa) treatment (surgery or any form of radiotherapy whether external beam radiotherapy or brachytherapy), has side effects including:

While most men recover from pain and incontinence after PCa surgery, they often live with long-lasting and debilitating sexual dysfunction that remains untreated and unresolved.[6]

Male sexual dysfunction may present as one or a combination of the following conditions: [7] 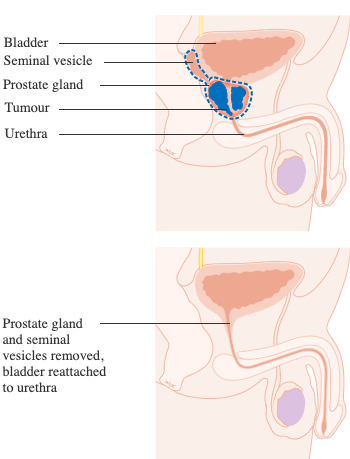 Prostate Cancer Surgery, specifically a radical prostatectomy is commonly used as a curative measure to treat prostate cancer, and surgeons aim to retain urinary continence and sexual function during the procedure of removing the prostate[9].

A radical prostatectomy (see R image) - challenging urologic procedure because the prostate is in close proximity to the bladder, rectum, and neurovascular supply to the penis.

A 2017 study found that erectile dysfunction (ED) was common regardless of the treatment modality (surgical or non-surgical) used for PCa.

With a research field full of data on general sexual dysfunction, there still remains a host of sexual dysfunction side effects after early stage prostate treatment that are being neglected and left untreated by medical professionals.

Erectile functioning but this is one component of male sexual function

Other problems related to sexual desire, ejaculation and orgasm, include

These conditions are collectively referred to as the “neglected sexual side effects”. Frey et al 2014 reported in their systematic review of post prostatectomy patients that OAI and UISS are experienced by 20–93% of RP patients, orgasmic function was altered in 80% of patients, OAP was experienced by 3-19% of patients and PS occurred in 15–68% of patients.[6]