The clinical definitions of Transient Ischaemic Attack (TIA) and ischemic stroke are based on focal neurologic signs or symptoms referable to known cerebral arterial distributions without direct measurement of blood flow or cerebral infarction. It is important to note that TIA and stroke represent different ends of an ischemic continuum from the physiologic perspective, but clinical management is similar[1].

The definition of a TIA has moved from time-based to tissue-based. A TIA

Evaluation of TIA should be done urgently with imaging and laboratory studies to decrease the risk of subsequent strokes. The subsequent risk of TIA or ischemic stroke can be stratified with a simple clinical measure. Immediate multimodality therapeutic interventions should be initiated.[2] 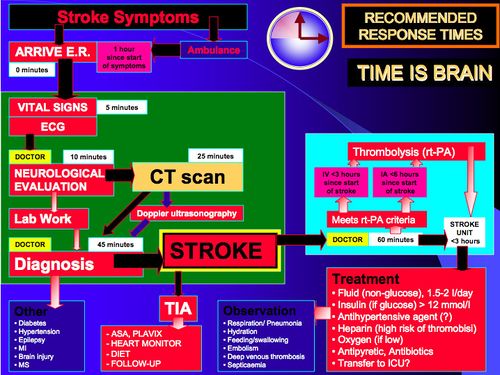 The concept of TIA emerged in the 1950s, with the observation by C Miller Fisher, and others, that ischaemic stroke often followed transient neurological symptoms in the same arterial territory[3].

In the 1960s, transient ischaemic attacks were considered to be sudden, focal neurological deficits of vascular origin lasting less than 24 h (an arbitrarily assigned endpoint). A stroke was considered to have occurred if a neurological deficit remained for more than seven days. Those neurological events that lasted between 24 h and the seven-day stroke threshold were classified as a reversible ischaemic neurological deficit – a term now rendered obsolete. Its removal definitions arose when it was proven that most events lasting 24 h to seven days were associated with cerebral infarction and thus should carry the diagnosis of stroke. This led to a divergence in the North American and World Health Organization’s view of stroke, one emphasising the evidence of infarction and the other clinical symptoms[4].

Like ischaemic strokes, TIAs are due to locally decreased blood flow to the brain, causing focal neurological symptoms. Decreased blood flow results from either embolism into a cerebral supply artery (from the heart, or the great proximal vessels, extracranial or intracranial arteries, usually affected by atherosclerosis), or in situ occlusion of small perforating arteries.

Resolution of symptoms probably occurs by spontaneous lysis or distal passage of the occluding thrombus or embolus, or by compensation through collateral circulation restoring perfusion into the ischaemic brain area.

TIA subtypes, classified according to the pathophysiological mechanisms are similar to ischemic stroke subtypes. They include [2]

The common risk factors for all TIA include diabetes, hypertension, age, smoking, obesity, alcoholism, unhealthy diet, psychosocial stress, and lack of regular physical activity. A previous history of stroke or TIA will increase substantially the subsequent risk of recurrent stroke or TIA. Among all risk factors, hypertension is the most important one for an individual as well as in a population.

Clinical manifestations will vary, depending on the vessel involved and the cerebral territory it supplies.


The key rule here is that symptoms of TIA should mimic known stroke syndromes, and so depend on the arterial territory involved; see the Stroke page for details

A TIA may last only minutes, therefore symptoms have often resolved before the patient presents to a clinician. Thus, historical questions should be addressed not just to the patient but also to family members or friends who were present at the time of TIA. Witnesses often perceive abnormalities that the patient cannot, such as changes in behaviour, speech, gait, memory, and movement.

The main diagnostic challenge of TIA is that the symptoms and signs have usually resolved by the time of assessment[9].

National Stroke Association has established guidelines for TIA evaluation as follows in 2006:[2]

Most stroke centers will admit patients with TIA to the hospital for expedited management and observation if the score is 4 or 5 or higher.

For those patients who have a lower score, expedited evaluation and management is still warranted. This expedited approach has been proven to improve the outcome

Differential diagnosis of TIA includes but is not limited to[2]

Physiotherapists have a role in this population and when treating patients with chronic conditions of bringing awareness/discussing lifestyle behavior changes[10]. The patient should be educated about the importance of blood pressure control, discontinuing smoking and eating a healthy diet and educated about the symptoms of a stroke and when to seek immediate medical assistance.[2]

A TIA can mimic a stroke and up to 10 percent of first-time sufferers often experience full-blown strokes within as little as 90 days. Despite the well-known statistics, no post-TIA regimen exists to help prevent future strokes -- but this might be changing. The most common risk factors for stroke -- hypertension, physical inactivity, elevated lipids, and diabetes -- also are leading risk factors for heart disease.

Researchers found that a modified version of cardiac rehabilitation was effective at reducing some symptoms of stroke in just six weeks following a transient ischemic attack (TIA) often referred to as "mini strokes." No post-TIA regimen exists to help prevent future strokes but researchers say that needs to change. The study showed that participating in a modified version of the second phase of cardiac rehabilitation, which is a well-established program nationwide. This involved 1.5 hour sessions 3 times a week for six weeks. They concluded that all people following TIA should be offered such rehabilitation (and to see their GPs before commencing an exercise program)[12].