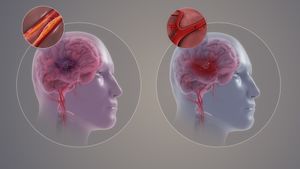 According to the 2010 Global Burden of Disease Study, Stroke categorised under Cardiovascular and Circulatory Diseases, is the second leading cause of death globally and the third leading cause of premature death and disability as measured in Disability Adjusted Life Years (DALY). Cerebrovascular disease is the largest neurologic contributor and accounts for 4.1% of total global DALY.

Almost half of stroke-related mortality may be attributable to modifiable risk factors (i.e. hypertension, diabetes, dietary risks, impaired glucose intolerance, obesity, smoking, air pollution, alcohol use, hypercholesterolemia, and physical inactivity). This is mainly due to the outcome of poor clinical management, limited access to health care, and late detection of underlying risk factors. This occurs often as a result of the societal barriers in lower socioeconomic groups, were the burden is the greatest. Social and economic policies to reduce inequalities in stroke care should become a health priority, particularly in less wealthy countries. The policies should focus on treating early predisposing factors and on educational programmes from childhood, which have long-lasting impacts on adulthood health. Similarly improving worldwide primary healthcare services may have an important impact on post-stroke outcomes. Improving stroke awareness among socioeconomically deprived individuals and societies and providing equitable post-stroke medical care is essential.[1]

The global burden of Stroke is increasing globally[3][4].  Feigin et alanalysed the Global and Regional Burden of Stroke between 1990-2013 and provided an update on the incidence, prevalence, mortality, disability-adjusted life years (DALYs) and years lived with disability (YLDs)[3][4][5].

Although age-standardised rates of stroke mortality have decreased worldwide, the absolute number of people who have a stroke every year, stroke survivors, related deaths, and the overall global burden of stroke (DALYs lost) are great and increasing. Further study is needed to improve understanding of stroke determinants and burden worldwide, and to establish causes of disparities and changes in trends in stroke burden between countries of different income levels[6].

You can explore country specific visual and statistical data in relation to Stroke at a "Causes of death visualisation" tool on The Lancet. 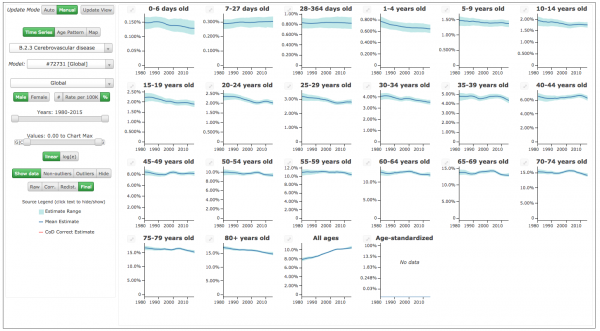 The worldwide burden of haemorrhagic stroke (HS) has increased over the last 2 decades[7] in terms of absolute numbers of HS incident events. The majority of the burden of HS is borne by LMIC. Rates for HS incidence, mortality, and DALY lost, as well as MIR decreased in the past 2 decades in HIC, but increased significantly in LMIC countries, particularly in those patients 75 years. HS affected people at a younger age in LMIC than in HIC. The lowest incidence and mortality rates in 2010 were in High Income North America, Australasia, and Western Europe, whereas the highest rates were in Central Asia, Southeast Asia, and sub-Saharan Africa[8]. 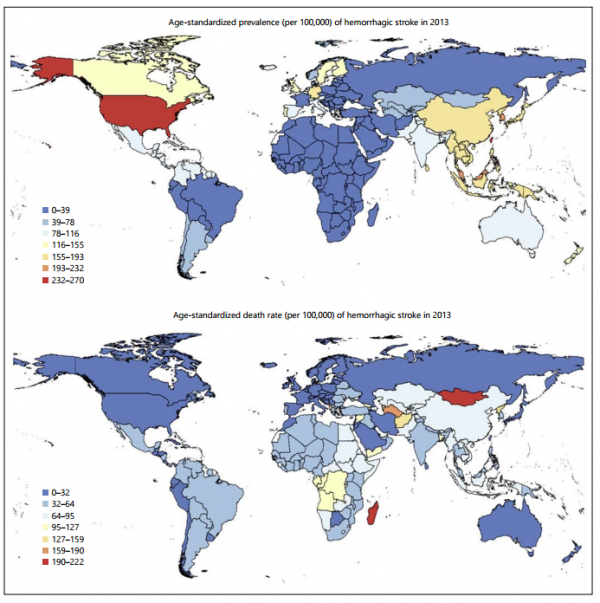 Although age-standardized ischaemic stroke (IS) mortality rates have declined over the last 2 decades, the absolute global burden of IS is increasing, with the bulk of DALY lost in LMIC. Tobacco consumption is an important modifiable risk factor for IS, and in both 1990 and 2010, the top ranked countries for IS deaths that could be attributed to tobacco consumption were China, Russia, and India. Tobacco control policies that target both smoking initiation and smoking cessation can play an important role in the prevention of IS. In China, Russia, and India, even modest reductions in the number of current smokers could see millions of lives saved due to prevention of IS alone[9].

The major risk factors for stroke include:

Other risk factors for stroke, many of which of you can control, include:

Many factors are relevant in prioritising strategies to reduce risks to health. These include the extent of the threat posed by different risk factors, the availability of cost-effective interventions, societal values, culture and preferences. Risk assessment and estimates of the burden of disease resulting from different risk factors may be altered by many different strategies.

Ovbiagele & Nguyen-Huynh[10] highlight the role of epidemiological studies in identifying groups of individuals or regions at higher risk for stroke, which they believe can also help us better understand the natural history of stroke and therefore push the direction of therapeutic investigations.

In many countries and regions, Stroke Registers, are now being used to gain a greater understanding of the prevalence of Stroke and assist with research and service planning. These registers are databases of clinical information, with the primary aim being collection of key data items to provide information on the quality of care for individual patients with stroke and transient ischaemic attack (TIA) in order to provide high-quality information to identify areas where improvements in quality of care should be prioritised, reduce variations in care delivery and, ultimately, provide evidence of reduced deaths, disability, and recurrent stroke.