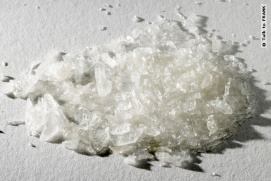 Methamphetamine is one of the powerful stimulants of the central nervous system (CNS). It is sometimes used as a second-line treatment for attention deficit hyperactivity disorder and obesity; however, methamphetamine is better known as a recreational drug. Street names include meth, speed, ice, glass, chalk, and many others.[1]

Methamphetamine was first discovered in 1893. In 1919 methamphetamine originated from amphetamine in Japan. In the 1930s, the drug was introduced to the United States as a bronchial inhaler and a nasal decongestant and later, it was used to treat obesity. Prescribing this medication is limited due to its neurotoxic potential and risk of recreational use as a euphoriant. Today, there are safer medications of choice with the same treatment efficacy, and hence, the use of methamphetamines in the United States is very limited. Due to illicit trafficking and recreational use the agent is classified as a schedule II, controlled substance in the United States and the United Nations Convention on Psychotropic Substances.

The use of methamphetamine in higher doses can induce: psychosis; bleeding in the brain; skeletal muscle breakdown; seizures. Chronic use can cause: violent behavior; mood swings; psychosis such as paranoia, delirium, auditory and visual hallucination, and delusions.

Chronic long-term methamphetamine use can be highly addictive, and if it discontinued abruptly, may lead to withdrawal symptoms that can be persistent for months after use.[2]

Methamphetamine is a central nervous system stimulant similar to the drug amphetamine and is classified as a Schedule II drug due to its high potential for abuse. It affects the brain by increasing the release and blocking the reuptake of dopamine which is a common mechanism of action for most drugs that are abused.[1]

Dopamine is a neurotransmitter responsible for the reward, motivation, and pleasure centers of the brain. Methamphetamine causes a rapid release of dopamine in the brain resulting in an intense euphoric or grandeur feeling which is the addictive property of the drug.[1]

Methamphetamine is a white, odorless, bitter tasting crystalline powder which can easily be dissolved in water or other liquids. It is taken orally, intranasally (snorting), by smoking, or intravenously.[1] [3]

Meth can be made from common household substances including:

There is no one known cause of methamphetamine abuse but it is thought that the following can lead someone to try any drug including meth and subsequently become addicted:

In a response to an increase of methamphetamine abuse in South Carolina researchers found that compared to abusers of other drugs, methamphetamine abusers were more likely to be female, between 20 and 40 years old, and of non-Hispanic white ethnicity. Further, more methamphetamine users had occupational/economic problems and problems with their primary support group.[7]  Another study in California following an increase in abuse found that amphetamine abuse was greatest in rural areas with more young low-income whites, a greater amount of retail and alcohol vendors, and fewer restaurants. However, growth rates were greater in higher-income areas with larger non-White and Hispanic populations. This shows that methamphetamine abuse can quickly become popular in a multitude of cultures and communities.[8] 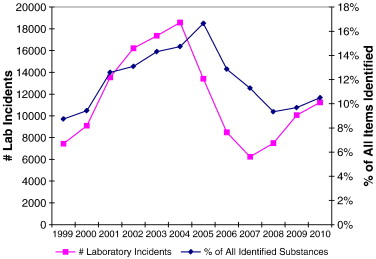 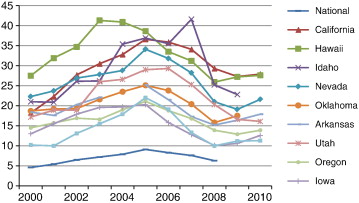 Meth abusers can present with a variety of physical characteristics which can include the following:

More chronic meth users can also present with the following: 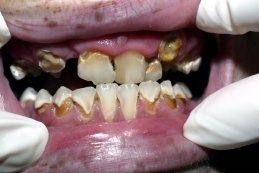 Due to the unpredictable behaviors, irritability, and the possibility of psychotic behavior of methamphetamine users especially during the hospital visit due to the overdose, or complication, the safety of medical and security staff are important. Hence, it is always advised to use precautions when dealing with these patients. Another healthcare worker or security personnel should always accompany these patients. The triage nurse should be fully aware of the adverse effects of amphetamine and ensure that the emergency department is fully aware of the individual admitted.[2]

There is no one drug that is used to cure methamphetamine addiction but this list offers help to those individuals who are in the process of recovering:

These drugs along with psychological treatment at a drug/rehab facility offer the best hope for the addict to have a successful recovery.[15]

Urine, hair, breath, saliva, sweat, and blood, along with behavioral and psychological cues are used most often in drug testing. Due to ease of retrieving a sample, speed of analysis, and low cost, urinalysis is most often utilized. Urinalysis detects the presence of drug metabolites or physical byproducts of the drug’s use. Most accurate is the use of blood testing, which measures the actual presence of the drug or its metabolite in the blood at the time of the testing. However, these tests are more invasive, expensive, and more time consuming. Hair testing uses the same technology as a urinalysis, but has advantages for detecting use. Using hair testing, drugs can be detected in hair for weeks to months, as opposed to 2-3 days with blood or urine testing.[17]

Crystal meth increases dopamine levels in the brain in two ways. First, it increases dopamine release, therefore increasing dopamine in the intercellular space. Because dopamine is a neurotransmitter, this increase produces stronger nerve signals. Second, methamphetaminne prevents reuptake of dopamine into the brain cell. Methamphetamine blocks the dopamine transporters, trapping more dopamine within the intercellular space. Because of both of these actions, dopamine accumulates and the cell is bombarded, causing increased stimulation and a stronger signal transmission. Using methamphetamine can cause a 1,500 percent increase in dopamine. 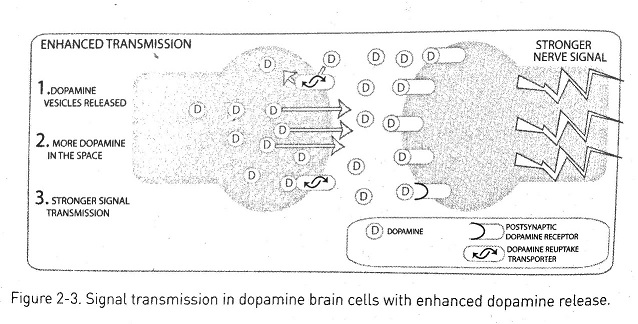 Dopamine is not just utilized in the brain.  It is used throughout the entire body to initiate the flight-or-flight response.

Dopamine causes an increased heart rate and vasoconstriction in other areas of the body. Because of these responses, the heart requires more oxygen delivered to other organs of the body. However, an increase in blood pressure to accommodate for this need can sometimes prevent blood from returning to the heart due to a decreased motility of blood through the vessels. In some cases, blood vessels that feed the heart constrict, preventing the heart from receiving an adequate blood supply, leading to myocardial infarction. It is possible that instead of experiencing one traumatic event, some methamphetamine abusers suffer multiple small MI’s over time.

GI motility decreases due to decreased blood flow, which secondarily causes a decreased appetite and less frequent bowel movements. In extreme cases, patients can suffer from bowel ischemia due to insufficient blood flow.

Methamphetamine use can lead to muscle breakdown, increasing the level of breakdown products such as creatinine phosphokinase (CPK), which is toxic to the kidneys in high concentrations. Continued and increased muscular breakdown can lead to rhabdomyolysis, a condition involving extreme muscle breakdown and possible kidney failure. These comorbidities can be prevented by staying hydrated.[18]

The most effective treatments being used today to treat methamphetamine abuse or addiction involves cognitive and behavioral interventions. Trained psychotherapists who specialize in the area of drug addiction are the preferred medical professionals to carry out these interventions.[19]

Initially, the meth abuser needs to attend a detox center with trained medical staff to be assessed and treated for physical and psychological complications that can occur as the person’s body is going through withdrawal from the drug.[19] 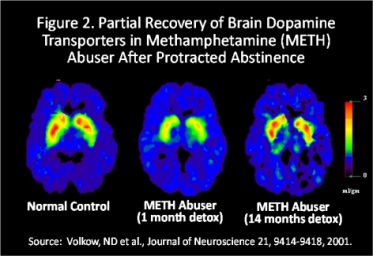 Medications such as Wellbutrin are used in conjunction with psychological therapy to treat depression which many recovering addicts suffer from along with the willingness to change can lead to a successful recovery.

There is currently minimal evidence on PT management of methamphetamine abuse.  Instead, we are encouraged to treat the many comorbidities.  Physical Therapy involvement in methamphetamine abuse predominantly involves referral to authorities (e.g. home health), psychological care, or other appropriate medical staff.