Alpha-synuclein (α-syn) is a small protein encoded by the SNCA gene (the gene that provides instructions for α-syn). It is amply expressed in the nervous system and exists in a natively unfolded state under normal physiological conditions (however its conformation changes depending on its environment and interactions with binding partners).[1]

Where Is α-Syn[edit | edit source]

α-syn is abundant in the brain, and smaller amounts are found in the heart, muscles, and other tissues. In the brain, α-syn is found mainly at the tips of neurons in the specialized structures known as presynaptic terminals. Presynaptic terminals release neurotransmitters (chemical messages), from synaptic vesicles. In a healthy nervous system, α-syn is involved in transmission between neurons, helping signals move throughout the nervous system and within the brain. This allows for coordinated movement, proper control of bodily functions, and overall normal brain function.[2] 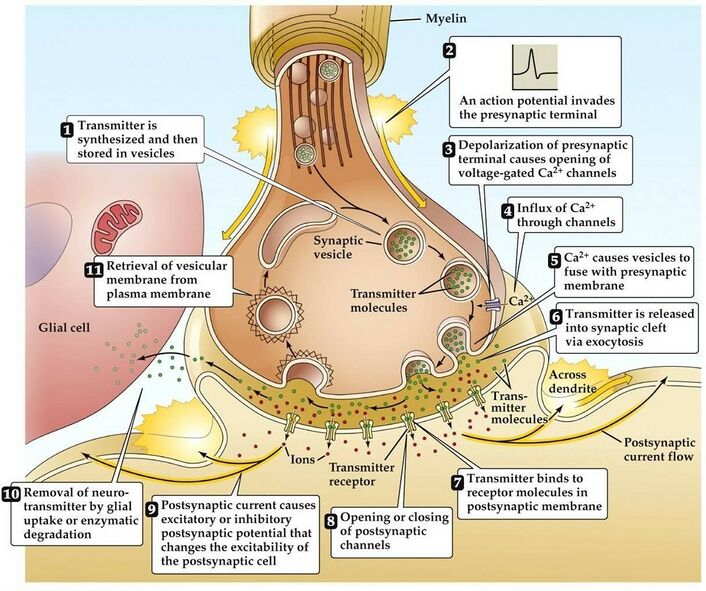 α-syn: found mainly in presynaptic terminals in the brain. 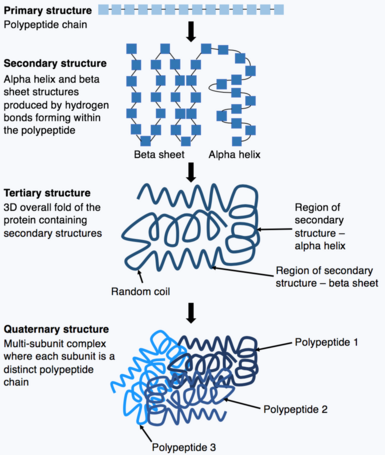 For our body to function correctly, proteins are folded neatly into a shape that allows them to do their jobs . Proteins that are structured incorrectly usually are flagged and then fixed or thrown away. This is a complicated job involving enzymes, chaperones, and small organelles, all monitoring the protein shape. This network helps prevent the formation of sticky piles of protein (known as aggregates) that cause disarray to our cells.

However, the presence of genetic mutations or simply aging can make the protein surveillance system less effective, and this allows proteins (for example α-syn) to turn nasty, folding into an incorrect shape that cannot be fixed. If the neuron is unable to fix or dispose of the wrong shape, a whole a cascade of protein-misfolding occurs results in a sticky pile of α-syn. This causes havoc to the the normal neuronal function, creating debris that the neuron may not be able to clean up.

Many conditions (see synucleinopathies) can promote this transition from soluble, functional α-syn into insoluble aggregates, and once this process begins, it proceeds in a feed-forward manner in aggregates form and seed, recruiting soluble α-syn into more aggregates, a process that once escalated is largely irreversible.

While α-syn oligomers and aggregates have not been proven to be directly toxic, they are consistently associated with toxicity. Within Parkinson's disease and other synucleinopathies, α-syn transforms from a soluble, functional protein to aggregated protein (i.e., LBs) that becomes associated with pathogenic results.[3][2] 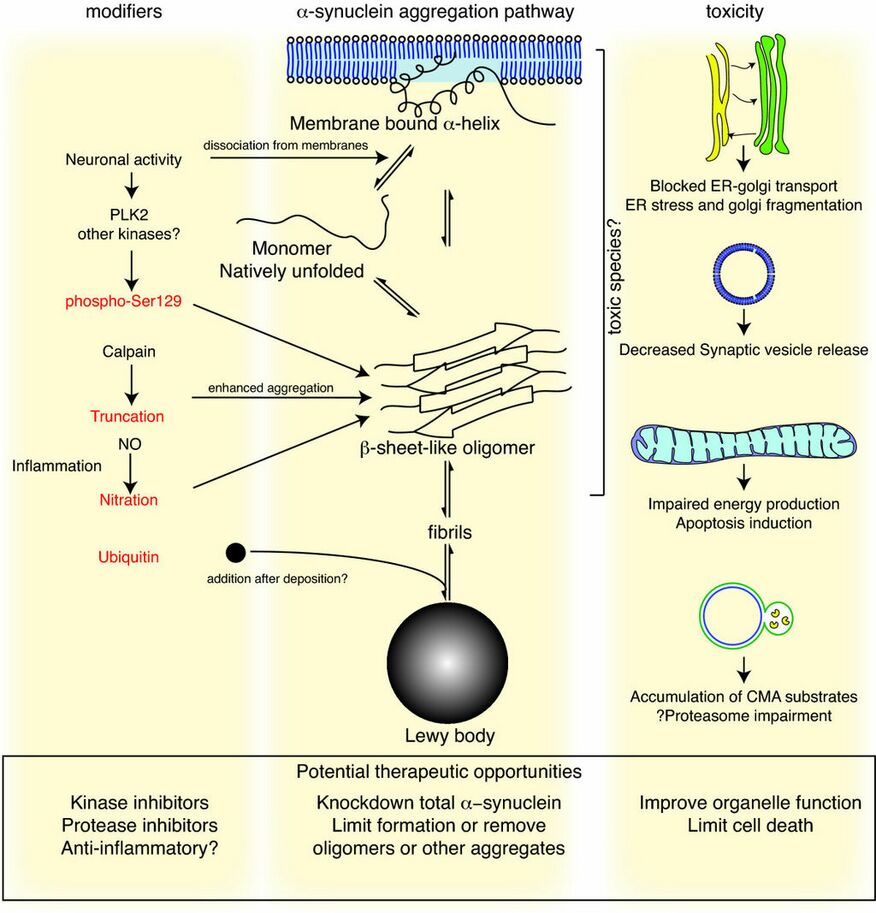 Events in α-synuclein toxicity. The central panel shows the major pathway for protein aggregation. Monomeric α-synuclein is natively unfolded in solution but can also bind to membranes in an α-helical form. It seems likely that these two species exist in equilibrium within the cell, although this is unproven. From in vitro work, it is clear that unfolded monomer can aggregate first into small oligomeric species that can be stabilized by β-sheet-like interactions and then into higher molecular weight insoluble fibrils. The deposition of α-synuclein into pathological structures such as Lewy bodies is probably a late event that occurs in some neurons. * On the left hand side are some of the known modifiers of this process. * On the right are some of the proposed cellular targets for α-synuclein mediated toxicity

The aggregation formation involves the binding between α-syn and other protein complexes (examples being tau protein and β-amyloid) and is termed “cross-seeding,”. This mechanism is largely responsible for the formation of Lewy bodies (LB). LB are abnormal neuronal intracytoplasmic inclusions which are composed of > 70 proteins, the core being chiefly α-syn fibrillar aggregates.[4]

A prion is a type of protein that can cause disease in animals and humans by triggering normally healthy proteins in the brain to fold abnormally. Through this process, it generates a great quantity of misfolded proteins, which are pathological for the carrier (patient). A core characteristic of prion proteins is their inter-organism transmissibility, which makes prions infectious agent (with a high morbidity).