Agnosia (in greek gnosis- "not knowing") is a neurological condition in which a patient is unable to recognize and identify objects, persons, or sounds using one or more of their senses in spite of normally functioning senses.[1] It is a sensory disorder as person is unable to process sensory information.

Less than 1% of all neurological patients have agnosia and pure form of agnosia is rare. Visual agnosia is the most common and better-explained type of agnosia.[2]

To analysis something by our brain, first of all we need to have sensory stimulus (vision, hearing, taste, touch and smell). These sensory stimulus are then taken to our sensory cortex by our afferent/sensory pathway. As it is processed by higher order centers, meaning is attributed to percepts, and information becomes multi-modal. Perceptual processing is necessary to identify what is being perceived through the various sensory modalities thus allowing access to semantic knowledge and through this understanding of the environment. Semantic memory comprises knowledge of facts, concepts, and language, stored without corresponding information about the initial learning experience.

For example, if standing in the path of an oncoming bus, basic perception will involve visual information, hearing the bus coming, and feeling vibration from the ground. These separate tributes then come together, accessing relevant semantic knowledge and thus allowing the individual to understand what is taking place.[4]

Agnosia was first described by the German neurologist Lissauer in 1980 who hypothesized that object recognition occurred on two consequential levels of analysis. First being the perceptual level, in which the integration of elementary sensory data takes place in the complex forms and in second (associative), there is a comparison between what is perceived and the knowledge stored in memory.[5]But the deficits are not due to memory loss. 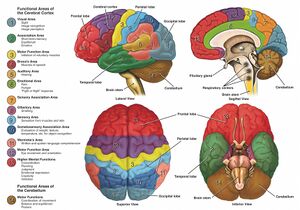 To understand the pathophysiology of agnosia, it is necessary to understand about sensory cortex, sensory relay center, sensory pathways and also memory and attention center.

Parietal cortex is mainly responsible for processing and integrating somatosensory inputs. Occipital lobe is for vision and temporal for hearing.

Agnosia happens when there is brain damage along pathways that connect primary sensory processing areas. These areas typically include the posterior parietal cortex and occipitotemporal regions.[2]

There are 2 forms of agnosia based on causes: apperceptive and associative.

There are 3 main types of agnosia, based on the type of sensation involved.

3. Color agnosia is the inability to identify and distinguish colors, despite intact basic color vision and brightness discrimination mechanisms. Usually, it occurs following lesion in the left occipitotemporal region of the brain.

4. Topographical agnosia is the inability to orient to surroundings because of the inability to interpret the spatial information. These patients have a good memory of the layout and specifics of the places well known to them, but they are unable to navigate their way through. It is associated with a lesion in the right posterior cingulate area of the brain.

5. Finger agnosia is a difficulty in naming and differentiating among the fingers of either hand as well the hand of others. It does not refer to the inability to identify a finger as a finger. Gerstmann syndrome which includes acalculia, agraphia, finger agnosia, and left-right disorientation.

6. Akinetopsia refers to the inability to perceive motion.

7. Agnostic alexia refers to the inability to recognize words visually. They can still write and talk without difficulty.[1]

It is an inability to recognize sounds despite intact hearing. It is typically associated with right side temporal lesions.

Tactile agnosia refers to the inability to recognize objects by touch. They can name objects visually.

It is characterized as loss of recognition or awareness of part of the body schemes. Most often, only one half of the body (usually the left) is affected which is called as hemiasomatognosia.[12]

How to diagnose agnosia?[edit | edit source]

History is key to diagnose agnosia. A detailed interview with the patient, family members, and caregivers helps to identify etiology and also difficulty in activities of daily living. For instance, Patients with simultagnosia will often have trouble reading and writing and interpreting multiple things at a time.

Neurological assessment should be performed thoroughly as diagnosing agnosia is ruling out alternative explanations. Agnosia can be diagnosed only in the absence of aphasia, generalized dementia, delirium, or any deficit that may impair some or all of the information-processing steps involved in object recognition.[2]

Multidisciplinary team is needed to treat patient with agnosia.

For neuropsychological rehabilitation, two approaches can be used.[13]